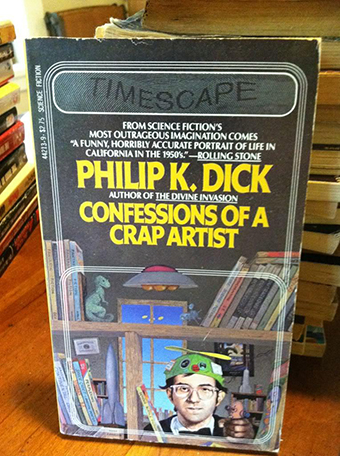 Some years ago, we arrived at the age of the “news clown.” It’s the age of realization of characters such as Philip K. Dick’s once fictional newscaster Jim-Jam Brisken, someone who runs for president in a flaming red wig. But we’re past that, now. No, not past Philip K. Dick; we’ve simply moved to another of his characters for representation of the new millenium. It’s Jack Isidore, of Confessions of a Crap Artist: A Chronicle of Verified Scientific Fact, 1945-1959. The book, composed right before the sixties began, didn’t find a publisher until 1975. Yet it is among Dick’s most powerful works—and it speaks to our time.

At the end of the book, Isidore (one of the narrators) realizes that the people who had thought of him as a nut have a point:
“What a thing to realize. All those years wasted. I saw it as clearly as hell; all that business about the Sargasso Sea, and Lost Atlantis, and flying saucers and people coming out of the inner part of the earth—it was just a lot of crap….

They were right, but thinking about them I came to the conclusion, after a long period of hard mediation, that they were not a hell of a lot better than me. I mean, there’s a lot of rubbish in what they have to say, too. They’re darn near a bunch of nuts in their own way….

As far as I’m concerned, the nuttiest of us all is my sister, and she’s still the worst; take my word for it. She’s a psychopath. To her, everybody else is just an object to be moved around. She has the mind of a three-year-old. Is that sanity?

So it doesn’t seem to me that I should be the only person who has to bear the onus of believing an admittedly ridiculous notion. All I want is to see the blame spread around fairly. (New York: Entwhistle Books, 169-170)

We’re mostly still at the beginning of the book though, waiting to learn Isidore’s lesson (I, too, until the presidential debate yesterday), still wandering around with our heads filled with poppycock and half-baked ideas, confused history and a complete misunderstanding of the meanings and uses of facts:

“I am made out of water. You wouldn’t know it, because I have it bound in. My friends are made out of water, too. All of them. The problem for us is that not only do we have to walk around without being absorbed by the ground but we also have to earn our livings.

Actually there’s even a greater problem. We don’t feel at home anywhere we go. Why is that?

The answer is World War Two.

As Bob Dylan sings, “We are idiots, babe,/It’s a wonder we can even feed ourselves.” We’ve all become idiots, Jack Isidores, each one of us vying to press our own particular brand of crap on as many others as we can find.

The problem with Hillary Clinton isn’t that she is the horrible person many of our homespun theories try to make her into but that we know, in our hearts of hearts, that she laughs at our outlandishness. And that just makes it worse.

For, yeah, we are all Donald Trump—even those of us, like me, who loathe him.

What Jack Isidore realizes at the end of the novel, as I realized while watching that “debate” between Clinton and Trump, we’re all full of crap. Even the ones who seem sane—even Clinton, for that matter. She may not be the sociopath/psychopath that Trump pretty clearly appears to be, but she isn’t completely sane, either.

Compared to the lunacy of the press and Trump’s self-proclaimed movement, however, she manages to appear an oasis of calm in a desert of swirling sniffle storms—and worse. At least, that’s what it looked like during the debate.

There are many of us who hate even that, who let it send us into proverbial paroxysms of rage. But we’re crazy.

Me, my anger while I watched the pundits and their focus groups in the aftermath of the odd performances at Hofstra was against Trump and the permission his candidacy has provided for all of us to bring our nuttiness out into the light. He said nothing new, spewed the same nonsense of the past year-and-a-half. But I couldn’t stop thinking about how this man, if I may use the term loosely, has turned our country into a ‘yuuge’ Mel Brooks movie set, one where Clinton’s ‘basket of deplorables’ has spilled out, letting all sorts of nuts run around in all their glory. Watching him, I could think of little but a Richard Farina song from just a few years after Dick’s novel was written:

“I was standing on the sidewalk, had a noise in my head
There were loudspeakers babbling, but nothing was said
There were twenty-seven companies of female Marines
There were presidential candidates in new Levi jeans
It was the red, white and blue planning how to endure
The fife, drum and bugle marching down on the poor
God bless America, without any doubt
And I figured it was time to get out.

The trouble is, there’s no place to go. The whole world has gone crazy. Unfortunately, there’s not “a hell of a good universe next door” (thanks, e. e. cummings). Our insanity has taken care of that, too.

Living in the age of the crap artist, we’ve made everything in the world into crap—our air, our water-filled bodies, our history—and our dreams, too.

Trump isn’t the worst: He’s simply the one making us face our failure.