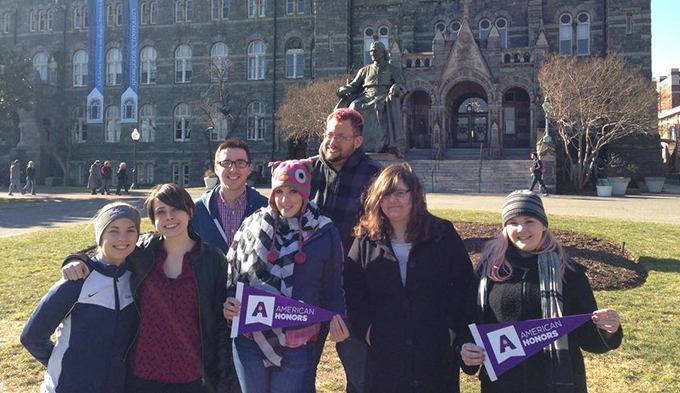 There has always been a multi-tier system in higher education. Everyone knows that, for example, a Harvard education isn’t quite the same thing as State U. On the other hand, less people know that within a typical state university, there is also a multi-tier system. There’s a mini-system just for athletes (the UNC scandal was more about this system spilling over into the general student population than anything else), a similar but slightly more passable system for the minimal students, existing only to suck out the student loan and grant money, and then, a small system of legitimate education, for the real academic students. On top of that, most campuses have some sort of Honors College, or Honors program, to really differentiate the top tier of students (not like you can use GPA for this, thanks to massive grade inflation).

University Admin, explaining how community college students can transfer to his university: “Well, we don’t care what the transcript says, and, assuming they can pass the placement tests—even the 4.0 students generally can’t—then we’ll transfer in their coursework, with two or three of their courses counting as one course on this campus…”

–When I was at a community college, so many students complained to me about the uselessness of trying to transfer their coursework (despite what accreditation and my bosses were saying), that I decided to follow up personally to find out why transferring was so difficult. I agree the university should be allowed to give entrance exams but…community colleges really should tell their students about the true transferability of their courses. Few, if any, do because acting with that sort of integrity would cut into growth…community colleges are unhinged for a reason.

Did the gentle reader notice my stress of the word “almost” before? It’s an important qualifier. Despite that much of community college courses are unhinged from what they say they do on paper (using bogus syllabi and fake textbooks to “fool” an accreditation system that doesn’t even care), despite the simple fact that community colleges are a huge fraud in general, the simple fact is a small percentage of students do use them successfully. Much like there is gold in seawater, there is legitimacy in community colleges, and some students benefit.These students use the system as it was intended: as a cheap way to prepare for an advanced education. Even though these students represent a tiny percentage of the suckers students on community college campus, they deserve fair treatment.

They often don’t get it.

They get their community college degree, but all they have to show for it is the same 4.0 GPA and slip of paper everyone else has. They try to transfer to university, and, even if they took care to take the legitimate courses at the community college, find out that the 2 year degree might not open any doors.

That solution: American Honors. The regular reader might recall I’ve mentioned one of the most important flags for determining if a school is bogus: it has a confusing name. So, much like a for-profit school calling itself “Massachusetts Institute of Techno” is almost certainly a rip-off, similarly, American Honors raises a flag for me. Schools already have honors programs, already referred to as such…an educational “service” whose very name makes it easy to confuse with an honors program tells me these guys intend to blow smoke.

Like many frauds happening on our campuses, everyone involved knows it’s a fraud:

“…charges more tuition for “American Honors” classes and that extra tuition pays for the program. Which consists of having an American Honors students only lounge (converted conference room–they hung up college flags and put in some extra chairs, but its seldom used) and seminars where they are taught to fill out college applications and how/where to apply for scholarships. Like, shouldn’t we be offering that to all our students free of charge?”

–faculty explaining the program on campus…but not to the students, since doing so invites termination.

So, American Honors gets the institution to charge extra for Honors classes, classes that are not honors classes (the former are classes with the program, the latter are honors classes in the usual sense…I trust the gentle reader can see some possible confusion there). It splits this money with the Poo Bahs. The Poo Bahs smile, because they simply don’t care that the students are being ripped.

The students themselves pay extra, to get some help in filling out forms, help that, yes, they should already be getting. The whole justification for the administrative bloat on our campuses is because, supposedly, the administrators are there to help students. Students thus pay a great deal more tuition than they used to, in exchange for this help, help they don’t get, unless they pay even more because admin doesn’t really want to help students.

Still, American Honors promises to hook people up with their system, which they claim is “a national transfer network. Top 4-year colleges and universities make special agreements that ease the transfer process for qualified American Honors students.” A look at their website shows some successes; curiously, their biggest success has a student going to an Ivy League school not in their network (and thus, no thanks to American Honors, though they’ll still take credit).

This sure begs the question: since community colleges already say they help students transfer, why do we need American Honors? If our community colleges were generally legitimate, American Honors would make as much sense as a system that, for a fee, makes sure your groceries are in your bag as you leave the supermarket. There’s no such system, of course, because supermarkets are generally legitimate, and have no interest in cheating their customers out of what their customers already paid for.