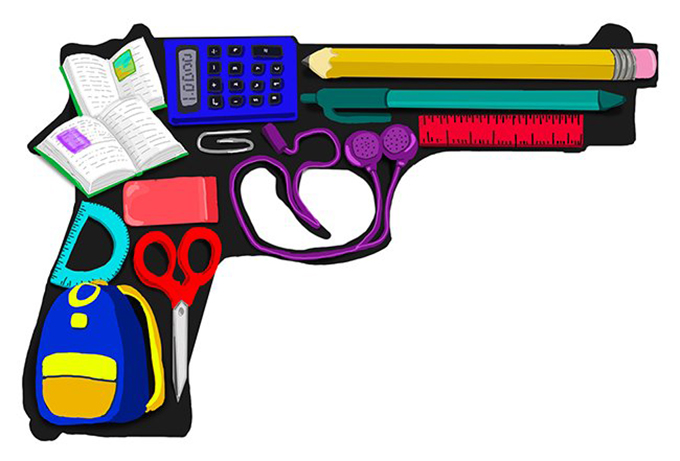 In 2015, Texas Governor Greg Abbott signed SB 11, also known as the “campus carry” law, at a shooting range. The law permits the concealed carry of guns in dorms, classrooms, and buildings at state universities and community colleges, while leaving individual schools some latitude to keep parts of their properties firearm-free, extending the reach of a previous law that allowed concealed handguns on university grounds. The law went into effect August 1 for public colleges and universities (and will be effective a year later for community colleges).  On October 6, 2015 I decried the “insanity” of such laws on this blog and that November the AAUP, the American Federation of Teachers, the Association of American Colleges and Universities, and the Association of Governing Boards of Universities and Colleges issued a joint statement opposing such laws, which declared, “College campuses are marketplaces of ideas, and a rigorous academic exchange of ideas may be chilled by the presence of weapons. Students and faculty members will not be comfortable discussing controversial subjects if they think there might be a gun in the room.”  Twenty-eight disciplinary associations issued a similar statement.

Both administrators and faculty in Texas have been working hard to limit the law’s potential impact (see, for example, the statement by the AAUP’s Texas Conference).  At the University of Houston (UH) the Faculty Senate took the lead in scheduling a series of three faculty forums to discuss “campus carry, academic freedom, and the new world of higher education in Texas.”  As I reported in February, those forums brought home chilling possibilities for endangering the personal security of students and faculty but also fears for the survival of genuine academic freedom in the classroom.

Such fears have often been dismissed by the law’s supporters and others, who minimize the likelihood that firearms could become a common feature of campus life.  It’s still early, of course, but evidence is beginning to suggest this may well happen.  In late August the New York Times reported on one University of Texas (UT) student who “on the fourth floor of a library on campus . . . quietly dropped his backpack and lifted the tail of his red plaid shirt to show a black .45-caliber pistol sticking from a holster wedged in the back of his waistband.”

“I wear it pretty much whenever I can,” the student said. He has a drawer full of different holsters for different occasions, the Times reported, and a small revolver he can easily drop in his pocket.  Although he acknowledged only one other student he knew who did the same, there are undoubtedly others who have not sought media publicity.

“The Second Amendment allows for a well-regulated militia,” said Professor Lisa Moore, who has sued the university and the state claiming that such “dangerously experimental gun policies” violate the First and Second Amendments.  “What we have is not a well-regulated militia.  It’s a 21-year-old with a backpack.  I’m worried about accidents,” she said.

According to a moving and powerful essay by UT Professor of African Studies Minkah Makalani published last week in The New Yorker, “In mid-September, faculty members from two different buildings reported having found bullet casings on departmental bulletin boards. One was left with a note that read, ‘In the land of the pigs, the butcher is king. OINK . . . OINK . . . OINK.’  Another was accompanied by a note that asked, ‘Triggered?’”

The law has also resulted in several outside speakers canceling talks on campus.  Makalani describes one such cancellation:

As the coördinator of the Diaspora Talk lecture series, which brings black-studies scholars from across the country to U.T., I now must confront a new reality. The first scheduled Diaspora Talk speaker for this year was Ruha Benjamin, a faculty member in African-American studies at Princeton University, who specializes in science, medicine, and technology, among other things. Benjamin penned an insightful letter informing us of her decision not to speak at U.T., which captures so much of what is disconcerting about campus carry, gun violence, and the failure to address this ongoing public-health crisis in a meaningful way. In it, she wrote of her sister-in-law, who was murdered in a mass shooting at her workplace, in Kansas, and of her recent dismay at a lockdown at U.C.L.A., where she used to work, after a gunman killed his professor and then himself. She also informed us that, in June, just hours after delivering a lecture at the Colorado Convention Center, she found herself in a building lockdown again, as a gunman entered a nearby office building and committed another murder-suicide. “These tragedies make me extremely concerned about the safety of not only myself, but other faculty, staff, and students,” Benjamin wrote.

Makalani herself grew up in an environment with excessive gun violence; she was 13 when “the first of many people I knew who would fall victim to gun violence” was killed.  For her “college offered two things: a place where you could debate ideas, and a place where there were no guns.” While she was there, however, “my brother was coming to terms with an environment in which you assumed that everyone you met had a gun and was prepared to use it. I was twenty-three when he was shot and killed. He had just turned eighteen.”   She concludes:

Faculty members have generally opposed campus carry because they suspect that allowing guns in the classroom will hinder our ability to teach about controversial subjects such as state surveillance, sexuality, race and racism, and radical social movements. Many of us entered the profession without knowing that we would have to consider whether a student who is upset about his grade, uncomfortable with a lecture on black queer sexuality, or disagrees with our placing slavery and white supremacy at the center of American history might have a gun holstered on his waist. We chose our profession believing that, while we might encounter resistance to new ideas, we could safely push our students to think more deeply about their inherited beliefs and assumptions. Campus carry undermines this kind of critical debate. I can’t help but think that this is what the architects of campus carry wanted. Still, the quest for the freedom to learn must continue.