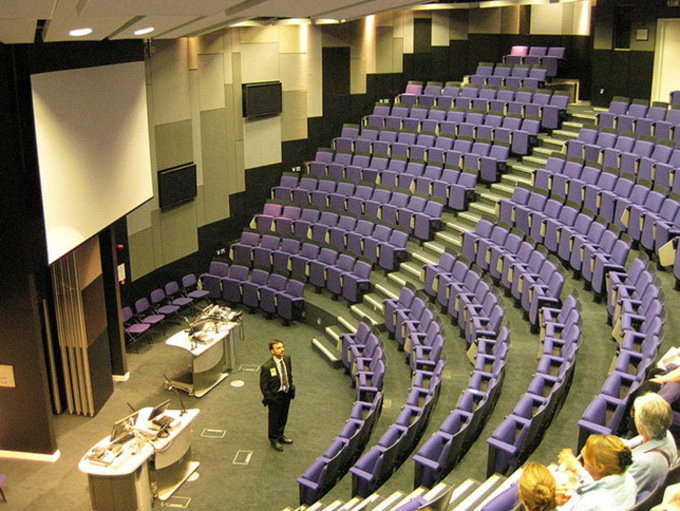 I may have been one of the first to truly take down describe what higher education today is, at most of our universities. Across the world, faculty are beginning to understand, on a widespread scale, the scam that is the modern higher education system. Yes, the world: America’s dominance of science and technology in the previous century gave it the impetus to spread its brand of higher education everywhere else, especially in the English-speaking world…unfortunately, the American system of higher education is hopelessly corrupted, and that corruption has spread.

He’s a little behind the times, truth be told, but says much of relevance. I’ll highlight these things, as well a few places where he’s off a bit.

He first identifies one big difference between higher education of today, and of a few generations ago:

That means at least half of my humanities students—or about 750 since 2007—don’t want to be there.

This is a flag that something’s warped about the higher education system. The last time (according to fossil faculty I’ve asked) classes had many students that did not want to be in college was during the Viet Nam war—being in college was the way to avoid the draft. Attendance was very good during the war, too, because back then you could toss students that didn’t show up to class. Insofar as the Viet Nam war was a horrible thing, I’m not about to criticize higher ed for saving some kids from that fate….the fact remains, there needs to be a reason for so many people on our campuses who do not want an education.

Yes, there are perpetual wars today, but being in college doesn’t protect our kids anymore as we use mercenaries instead of slaves to fight American wars now.

Student: “Yo, teach, we doing anything important in class today?”

–I was asked this question many times while at a community college, because students needed to know when skipping class might cause a little inconvenience.

There are two reasons now for having so many people on campus who do not want to be there. First is the misguided “education is the only way to a good life” mantra that is drilled into our children.

Second is the massive student loan scam that, at least in the short term, can provide a good living for our kids, at least until the loan money runs out. They might not want to be there, but yeah, the money is good enough.

Both reasons are insane justifications which cannot even theoretically work out. The faculty accurately identifies there’s a problem with “everyone must have a degree” while ignoring the loan problem:

“The credentialing game can be played for only so long before the market gets wise and values begin to decline… During that time, evidence has mounted showing that a bachelor’s degree from a Canadian university brings with it less and less economic earning power…Six months after graduation, the class of 2012 had an average income 7 percent below that of the class of 2005. Two years after graduation, incomes dropped to 14 percent below those of the 2005 class.”

It’s the loans that add insult to this injury.. Churning out degrees isn’t doing any good, just creating a class of indebted waiters and baristas that earn less because their degrees aren’t worth much, and then their reduced earnings take another hit making loan payments. There are many reasons for what’s changed in higher education that has led to reduced income of degree holders, and he identifies another issue:

“…the type of change I’ve observed on my watch: the eradication of content from the classroom.”

Gee, I was talking about the eradication of content from classes as a problem years ago, but this isn’t the whole picture of why degrees are worth so little now. The simple proliferation of degrees has debased their value…that’s my theory, but let’s get back to what this professor has to say:

The moment the lights went down, dozens and dozens of bluish, iPhone-illumined faces emerged from the darkness.

The professor shows a video, and students turn on their phones. Pretty much every classroom now is set up to show videos, and the thunderous crescendos of movie soundtracks regularly reverberate through my office. Maybe we shouldn’t show so many videos to the students? Yes, it makes them happy, but as the faculty notes, it’s not because of the movies we show, it’s because they can do whatever they want while the movie is showing.

All efforts to create the illusion of academic content are acceptable so long as they are entertaining, and successful participation requires no real effort and no real accountability. Serial use of YouTube clips, Prezi presentations, films, and “student-centred learning activities” continues to be peddled for pedagogical relevance.

While many classes are just idiotic PowerPoint lectures, quite a few are basically 50 minute net-surfing episodes that do nothing but entertain the butts-in-seats.

I have heard of an instructor, one sans PhD, who assigned his students videos of himself talking about this or that subject as their class text. A digital lecture is assigned as preparation for a live lecture that will be about a digital lecture. And this not from a Hannah Arendt or an Aleksandr Solzhenitsyn, but from a partly educated sessional instructor with a curiously inflated sense of self.

For what it’s worth, the professor is being a little elitist here—you don’t need a Ph.D. to teach in higher education, and never did. A century ago, the average professor didn’t have a Ph.D., “just” a Master’s degree. Ph.D.’s have proliferated as well…and I’ve shown before that anyone who wants an accredited Ph.D. just has to take out a loan, spend the money on ringers to take the classes, even write the dissertation, and a fully accredited doctorate will be arriving soon enough. Education doctorates are particularly easy to get this way.

–someone with a Ph.D. in Math Education taught his calculus students this, and doubled down when I tried to correct him, even though the books are pretty clear here. He’s been teaching calculus for years, and still does, to my knowledge.

I’ve seen so many bogus doctorates, especially in a certain field, that the title means nothing to me, and the gentle reader should put little stock in it…and certainly should not, like this professor, denigrate one without a Ph.D. as “partly educated.” A Ph.D. represents (in the old days) the holder made a significant contribution of knowledge, not that the holder had education. Now it means the holder wrote a big check and nothing more, as often as not.

The faculty shares my views on online education, being hawked at his school:

Digital lectures for live classes with real students? Sounds expensive. How about no lectures, no students, and, best of all, no professors—just student-directed online activity at cut-rate prices? If this sounds to you like a typical Wednesday night of surfing the web, that’s because it is. How universities could persuade anyone to pay for this kind of experience, discount or not, is a mystery to me.

You can learn amazing things online, YouTube is ridiculously good if you watch the right things, Khan Academy is awesome…but why exactly should you go deep into debt to do what you can do for free?

We’ll look more at what he has to say next time about the “new changes” in Canadian higher ed, though insiders in American higher education have known the truth for years.