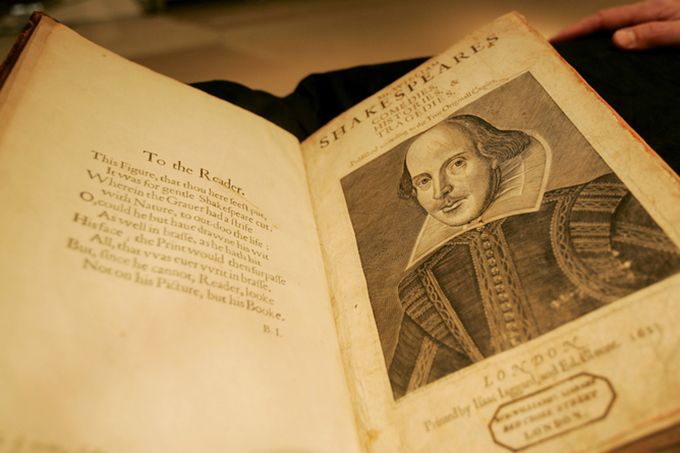 The person behind the poem is a “John Taylor”. British engraver George Vertue spoke of a person named John Taylor, whom he described as an actor and painter – and perhaps the very artist responsible for the famed “Chandos portrait” of Shakespeare. This was painted some time between 1600 and 1610 and is now on display at London’s National Portrait Gallery. Vertue called Taylor an “intimate friend” of Shakespeare.

Then there’s the poem, published in 1620 and entitled “The Praise of hemp-seed”. It was penned under the name John Taylor, although he was perhaps not the same individual as the artist described above.

“The Praise of hemp-seed” refers to Shakespeare in the context of the use of hemp (cannabis) for paper on which famous writers’ plays and poems were printed. On deeper reading, it may suggest that hemp was more than just a material for paper – it was a “muse” for Shakespeare and his peers.

The poem in question

Here is the relevant text from Folio Part III, page 72, with modernised spelling based on Taylor (1620):

In Paper, many a Poet now survives

Or else their lines had perished with their lives.

Spencer, and Shakespeare did in Art excel,

Forgetfulness their works would over run,

But that in Paper they immortally Do live

in spite of Death, and cannot die.

Taylor argues that writers “survive” through their work, which was published for posterity on paper produced from hemp, or cannabis. It is worth pointing out here that the cannabis plant was illustrated and referred to as “hemp” by botanist John Gerard as far back as 1597.

This is analogous to verse in Shakespeare’s own sonnets. I have previously found that in Sonnet 11 when the poet writes “Nature … meant thereby thou should’st print more, nor let that copy die”, he could be appealing metaphorically for the reproduction or propagation of hemp – from which paper was produced – and the publication of poetry (“copy”) into the future.

I also referred to a line in Sonnet 76:

Invention in a noted weed

[so] every word doth almost tell my name,

Showing their birth, and where they did proceed

Shakespeare may be saying here that his writings were “born” from the use of “a noted weed”, a term associated with tobacco, which can include cannabis.

Apart from paper, cannabis fibre was also used for clothing in 17th-century Europe. It is pertinent to mention that in Afrikaans, a language derived from 17th century Dutch and Flemish dialects, the word hemp refers to a shirt as an item of clothing.

Thus “weed” in Shakespeare’s time referred to both clothing and tobacco, and The Bard is famous for his wordplay. In Sonnet 76, there is clearly a link between clothing and poetry, as in “All my best is dressing old words new”. This is the same sonnet in which Shakespeare writes:

… invention in a noted weed.

There is absolutely no doubt that “invention” can refer to creative writing, potentially associated with a source of inspiration – or Muse – in the context of cryptic wordplay.

A muse of a different kind

Taylor’s poem, too, refers to the “Muse” in the context of hemp:

But hollow Muse what mounted to the sky,

I’ll clip your soaring plumes for you and I

Must talk of Paper, Hemp, and such as this,

And what a rich commodity it is.

My interpretation of this verse is: “I must talk of cannabis (hemp) only in the context of its use as paper. I can’t talk about cannabis as a source of inspiration since the wings of the Muse are clipped.”

This view could well relate to prohibition and censure associated with cannabis. It had been condemned by the church long before Shakespeare was active.

All of these observations are relevant to my view that Shakespeare may have smoked cannabis and perceived it as a source of inspiration. This is supported in part by chemical analysis of clay “tobacco” pipes from Shakespeare’s garden at New Place and elsewhere in his hometown of Stratford-upon-Avon indicating the smoking of cannabis.

Author Bio: Francis Thackeray is Phillip Tobias Chair in Palaeoanthropology, Evolutionary Studies Institute at the University of the Witwatersrand

Author’s note: I am most grateful to Chris Bennett for directing my attention to the “The Praise of Hemp-seed” by John Taylor (1620).