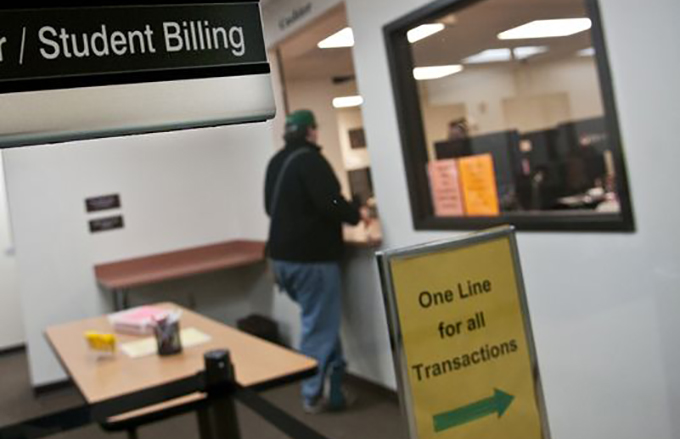 Good ol’ CNN, the major news organization that’s been dying on the vine for years…am I the only one that wonders how these guys make any money? It’s almost like they have a benefactor with very deep pockets that doesn’t care about CNN profits as long as CNN continues to spout the party line, but I digress.

It’s a guilty pleasure, but I go to cnn.com from time to time. In between the endless “Trump sucks” articles, pointless tease headlines, and puff pieces there are some nice train wrecks. Let’s consider this one:

Seriously, enrollment dropping is a bad sign? Uh, no. After years of wild fiscal mismanagement, irresponsible enlargement of useless degree programs, and incredibly predatory behavior (to list a mere few issues), institutions of higher education are finally destroying the good will they built up over centuries of honorable work.

Why are people turning away from college? I reckon it’s the same reason rats avoid a trap with a dead rat by it.

It’s one thing when you see an older sibling getting a degree and then moving into the basement, to serve coffee for a few hours a week. A prospective college student can see that and simply say “my big bro/sis was always a screw up, it won’t happen to me,” but when your parents can’t help you pay tuition because they’re still paying their own student loans, and your grandparents can’t help either because they’re losing their social security checks to their student loans, the thought that maybe college isn’t a sure path to riches has to come mind.

Bottom line, there are way too many victims of higher education in plain sight today to blindly trust an administrator when he asks you to check a box for a guaranteed student loan.

Regrettably, the drop in enrollment worthy of a CNN news piece isn’t enough to make a dent in the number of future victims:

For years, America’s college campuses swelled with more and more students. But enrollment peaked in 2010 at just over 21 million students. Attendance has dropped every year since.

By the fall of 2014 — the most recent year government data is available — there were 812,069 fewer students walking around college campuses.

We’re talking not even a 5% drop over the course of years. This is not exactly ruinous, not with all the wealth pouring onto campus from the higher tuition. Still, a reasonable person might wonder at the drop. CNN suggests an answer, and of course screws it up:

Some say not to worry, the drop is happening because the economy is improving. More people are going back to work instead of signing up for additional degrees.

Heheheh…no. An honest look at real things tells us the economy isn’t improving, and to even say it’s going nowhere is moronically optimistic. There are hundreds of locomotives sitting idle; the government can fiddle with the numbers all it wants, but the locomotives aren’t moving because there’s nothing to move. If goods aren’t moving, they aren’t selling because nobody is buying them, and the goods aren’t stacking up because nobody’s making them. How healthy can an economy be if nobody is producing, buying, or selling?

A record number of people were on food stamps in 2013, and the numbers haven’t changed much since then. How good can an economy be if the people can’t even feed themselves?

The word “unemployment” doesn’t mean the same thing “unemployment” did a decade ago. We have more people in the country today, less of them working, the smallest labor participation rate in more than a generation. And yet we’re supposed to believe unemployment is low? If it were measured the way it was at the turn of the millennium, it’d be more than double what governments says it is today.

How does CNN not know these things? Well, seeing as I couldn’t link to CNN news articles for the above simple facts, I guess we know the answer there…but still, to suggest the “improving” economy as the reason less people are getting suckered into college nowadays is willful ignorance.

College graduates make almost double the salary of workers with only a high school diploma. If you care about the rise in inequality in America, declining college enrollment should alarm you.

Wait, what? We’ve had record numbers of people going to college for years now, enrollments today are still millions more than they were in the 70s.

How can you suggest college is the path to the middle class today, when middle class shrank in the face of steeply rising enrollments? How does CNN not see the flaws in their thinking here?

I maintain the reason for declining enrollment is people are figuring out that there are lots of scam schools out there, and are staying away, rather than being taken advantage of by our predatory higher education administrators.

Followers of my blog know that the primary type of scam schools are accredited for-profit, and accredited community colleges. So, using my logical thinking, one would expect the drop in the student base would focus on these two types of institutions.  So where is the drop occurring?

The two types of colleges with the biggest declines in enrollment are: community colleges and for-profit universities. Those schools draw heavily from low-income and minority households.

Gee, the schools that target the most vulnerable are running low on victims. How come CNN couldn’t connect the dots here? CNN fumbles at the reasons for why these types of schools are losing students, although they get something right:

Some for-profit schools have been criticized heavily for offering “worthless degrees” and leaving students with big debt.

President Obama proposed making community colleges free for two years because they are the gateway to higher education — and better jobs — for so many Americans.

Ah, Obama’s stupid community college plan. Community colleges certainly can be a gateway to a better life, but all too often these places are traps, nothing more. For every student that manages to get something positive, hundreds, possibly thousands, of students are cheated.

Honest, community colleges and the for-profits are losing students for the same reason: people are catching on to the fact these places are rip-offs.

Again, CNN doesn’t seem to understand logic, and tries to blame finances for why enrollment is dropping at community colleges:

Finances are the top challenge…

But…community colleges are the cheapest institutions we have. How can you suggest finances as the reason people are running away from the cheapest schools, while still going to the more expensive schools? Look, maybe CNN is simply a propaganda site nowadays, but if that were the case their lies would be more plausible, instead of this endless stupidity. Articles like this lend credence to the theory that CNN is just stupid, nothing more.

Even if people weren’t still going to more expensive non-profit and state universities, finances can’t explain why students are avoiding the common scams at the community college level, because the Pell Grant scam will pay full tuition for anyone who wants to go, and provide extra money on top of the tuition. This is quite the train wreck, even for CNN.

Regardless of CNN’s ineptitude, we can at least take comfort that fewer people are being victimized in today’s higher education scheme.