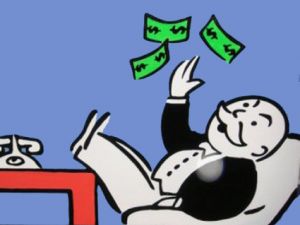 Time and again when I look at fraud in higher education, the most egregious seems to be in the community college system. The system is just so deliciously ripe—top down management, fake oversight, and a public trained to believe “all education is good to have” means community colleges get a free pass that would make a banana republic dictator turn green with envy.

And I do mean green. One of my more recent examples was of a community college Poo Bah that had his own private high end restaurant built, and ran up over a $100,000 tab eating there…a tab paid for by taxpayers that honestly thought their money was going to education, instead of stuffing the Poo Bah full of foie gras.

Barrista: “Hey, are you a teacher?”

Barrista: “I had you at the community college like 5 years ago.”

–I’m pro education, I really am, but I honestly believe people shouldn’t go deep into debt for it. I hope I helped the barrista, and I hope education makes her happy. As she’s serving coffee now, so I don’t think the education she got at the bogus community college really paid off fiscally. Should she be in debt forever for it? Should the admins at the college get wealthy for doing this?

The thing is, having a personal restaurant doesn’t happen in a vacuum. The Poo Bahs, especially community college Poo Bahs, get together for their leadership meetings and discuss how they can plunder the system. From these little get-togethers (again, paid for by taxpayers), the Poo Bahs get an idea of what they can get away with. Yes, sometimes they overdo it and get caught, but far more often than not they get away with the financial murder of taxpayer dollars for education.

A recent article on the Poo Bahs of the Chicago community college system (the same system that was feeding the Foi Gras Poo Bah) really highlights the kind of looting spree these guys are on.

“The base salary for the top administrators of the 14 community college systems in the city and suburbs ranges from the $183,750 paid to Don Manning at South Suburban College in South Holland to the $279,191 Elgin Community College pays David Sam. Sam’s salary is up from $260,000 in 2014.”

Hey, did the reader notice that this guy’s benefits include both an annuity and a pension? It must be nice to get two bonus-funded retirement accounts, each with more money pouring into it, every year, than normal people can even dream of. Again, this guy isn’t unusual, because, like I said, the Poo Bahs get together and plan these things:

“Most of the community college bosses’ pension contributions are paid by their schools, which typically also provide additional retirement benefits through deferred compensation and annuities.”

Other double-dippers at least have to devote their lives to two different careers, but these Poo Bahs double dip from a single job.

Growth and retention are paramount in a Poo Bah’s eyes: you want to get students on campus, and trap them there as long as possible. Many campus policies are created with these goals in mind. I’m not convinced Poo Bahs should be rewarded for hurting our young people, but Poo Bahs seem to dictate what they should be rewarded for.

Even though they set their own goals, these guys are failing at their job: Meanwhile, between 2010 and 2014, the 14 community colleges in the city and suburbs saw their student population decline by about 15 percent, according to the community college board.

Wait, what? These guys have lost 15% of their customers? Don’t they know a 10% drop means the school should be shut down as soon as possible? And yet, for this level of failure, these Poo Bahs get massive raises, and bonuses, too. Again, CHING!

“Though tuition is rising and enrollment declining at the seven-campus City Colleges of Chicago, Chancellor Cheryl Hyman was given a $35,000 bonus earlier this year by the agency’s board, bringing her total compensation to $320,667.”

Isn’t that fascinating? A bonus that’s more than the yearly median pay of the customers the Poo Bah “serves.” Even though these campuses are obviously being mismanaged, are not even growing (which is, like, the only thing Poo Bahs ever care about), Poo Bah pay goes up and up.

Despite their obvious inadequacy, these guys are shameless:

“He’s earned it, says Donna Redmer, who chairs the Elgin Community College board. Under Sam, the school has seen an increase in the number of students finishing two-year degrees and certifications — a rise also seen at most of other community colleges in the Chicago area….

“It’s all about good leadership,” she says.”

Earned it? His “success” is doing as good a job as everyone else, at best…the job he’s already being paid exorbitantly to do. As faculty, when my student evaluations are mediocre, I get chastised. If my publications are only average, I’m in trouble. But a Poo Bah that is average in some categories while failing overall gets…massive pay raises.

Tossing that usual claptrap about “leadership” is just pure garbage. Higher education isn’t about leadership, and it never was…not that any Poo Bah seems to know it. This isn’t leadership, it’s plunder.

They’ll claim it’s about leadership, of course, because leadership is unquantifiable, so they can bluster about how much they have, and get massive pay because of it.

While the article spotlights over a dozen Poo Bahs and their insane pay, it starts with a paragraph I must take exception to:

Leaders of taxpayer-subsidized community colleges in the Chicago area are collecting salaries that surpass most of their peers around the country, a Better Government Association analysis finds.

Yes, these Poo Bahs’ pay and benefits are in the $300,000 range, while the rest of the country generally pays Poo Bahs (plus benefits) more like $250,000…but this is still nuts. I’m told as a teacher that I’m performing a service, so I shouldn’t expect much pay…but these guys drown in the money they’re paid, then they drown again in bonuses and perks so generous that I’ll happily take any of their jobs for zero pay. Just give me the perks and I’ll see more money in a few years than I would in decades of teaching.

There’s so much focus on the indoctrination and political correctness insanity on campus, and I certainly can’t help but look…but we should also consider the obvious fraud and mismanagement as well, and what’s going on in Chicago’s community college system is actually quite typical of community colleges, I promise you.
www.professorconfess.blogspot.com