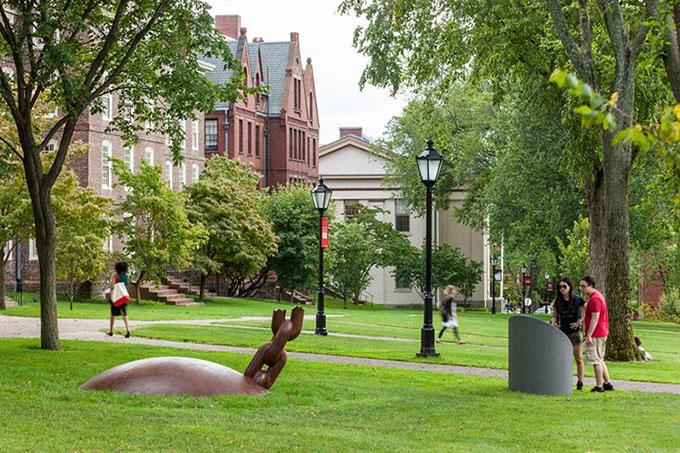 How should a university engage with the consequences of its own history? How can difficult and controversial pasts add to the quality and effectiveness of a university’s work in the present?

Ten years ago,Slavery and Justice report; reflections and recommendations following from revelations about its early benefactors’ involvement in the Rhode Island slave trade. Today, Brown is reprising these principles in considering how a university should respond to the deep and contentious divisions that have followed from the US elections.

In particular, Brown is looking to public history to open new perspectives on the past in order to intercede in the deeply divisive issues of the present.

The College of Rhode Island was founded in 1764. In the same year, Nicolas Brown and Company, prominent Providence merchants, financed a voyage to West Africa by the Sally, a 100-ton brigantine slave ship. Some 196 Africans were purchased, of whom at least 109 died on the home voyage from disease, starvation, suicide and through a failed insurrection.

The Sally’s voyage was one of numerous similar expeditions; Rhode Island merchants dominated the North’s part in the transatlantic slave trade, mounting more than a thousand voyages before the abolition of the trade in 1807, and then many more illegal expeditions after this.

The Browns, through several generations, were significant benefactors of the college, which was renamed for them in 1804. The family had wide-ranging business interests and was itself divided on the issue of slavery. As with many other institutions, the university’s complex entanglement with history came under public scrutiny as a result of the civil rights movement, calls for restorative justice and, in particular, the question of appropriate reparation.

In 2003, Ruth Simmons, who had been appointed as Brown’s president two years earlier, established a committee to examine and report on the university’s complicity in slavery and the slave trade. The committee was also to “reflect on the meaning of this history in the present, on the complex historical, political, legal, and moral questions posed by any present day confrontation with past injustice.” Its report – referenced above – was published in 2006.

One of the committee’s recommendations was that the university should make its own history a focus of its scholarship:

“Universities express their priorities first and foremost in their selection of fields of study. We believe that Brown, by virtue of its history, has a special opportunity and obligation to foster research and teaching on the issues broached in this report, including slavery and other forms of historic and contemporary injustice, movements to promote human rights, and struggles over the meaning of individual and institutional responsibility”.

Brown’s Center for the Study of Slavery and Justice was founded with this responsibility. Now, the centre’s transdisciplinary approach is on show in an exhibition to mark the 10th anniversary of the publication of Slavery and Justice. Black Mechanics – The Making of an American-University and a Nation sets the archival traces of the Rhode Island slave trade alongside poetry and art, allowing memory and imagination to animate the significance of the past for the present. For the centre, this is public history, “alert to shadows while facing the tough questions of today”.

Ruth Simmons sees her controversial decision to open Brown’s engagement with slavery to public scrutiny as vindicated by the exigencies of the present. Speaking at the opening of Black Mechanics earlier this month, she stressed the “obligation and burden” of truth-telling; on rejecting “lies and secrets”.

Simmons sees America today as a segregated society, as pernicious as the Jim Crow era. This presents universities with a crisis of integrity and a responsibility to protest. She sees future challenges to freedom of thought and action as inevitable. By openly confronting the complexities of its history, Brown has, Simmons believes, established the strength to address the deep fault lines that define today’s “uncertain times”.

The significance of the university’s Slavery and Justice report, and of the initiatives that have been built on its recommendations, is recognised by Brown’s current president, Christina Paxson: “This is what universities should be doing.” Paxson sees a direct connection between the past and its memories, recalled in the Black Mechanics exhibition, and the “raw and visible racial disparities” that she encountered as an economist engaged with the aftermath of Hurricane Katrina in New Orleans.

While the structural disparities that are part of the legacy of slavery may be well known, Paxson stresses that this does not absolve universities from the responsibility of addressing them; the courage and conviction to effect change is needed now, more than ever.

The connections that bind together history, scholarship, truth-telling and today’s issues are evident in the work of Brown’s Center for the Study of Slavery and Justice. Anthony Bogues is its director; his catalogue notes for the Black Mechanics exhibition summarise this present, and future, obligation succinctly.

“We now live in a time in which the afterlives of racial slavery are a part of our everyday present. The myth of a post-racial America has been laid bare over the last two years,” he writes. “The election of the first African-American president shaped a historical narrative of uninterrupted progress from slavery to unending freedom. Now, that narrative has faltered and we see the open appearance of acts of aggression which are meant to put people of color in their place.

“In such moments a new dominant historical narrative will be created, one which not only elides the past but will seek to actively repress it. This is the moment which we have entered and as such the work of public history is central to creating alternative perspectives on our past in order for us to grapple with our present.”

Author Bio: Martin Hall is emeritus professor in the Graduate School of Business, University of Cape Town, and former vice-chancellor of the University of Salford. He attended the opening of the Black Mechanics exhibition.