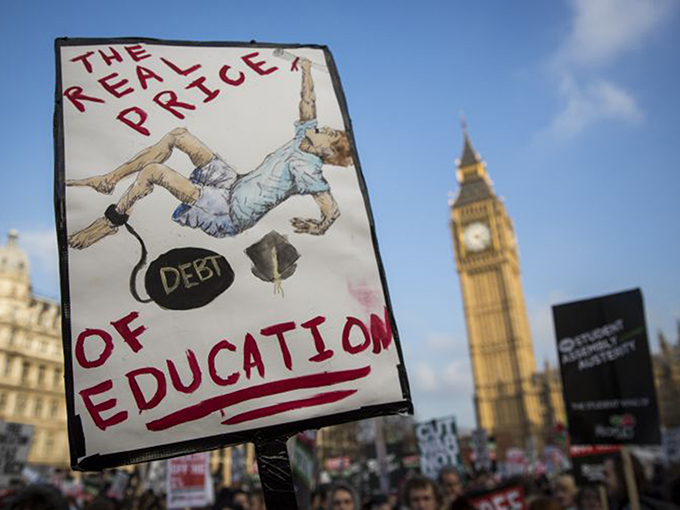 The past four years have seen English higher education come to rely more and more heavily on funding from student loans. These are now set to expand further, as the UK government carries out a consultation on loans for doctoral study.

Like previous reforms, these have the stated aim of widening access and meeting unmet demand. They also emphasise the importance of universities to the British economy and to industry. However, there are concerns that the loans will entrench the idea that higher education is valuable only in terms of financial gain.

Indeed, loans force students to ask themselves: is doctoral study worth the extra financial burden?

The doctoral loans have received little media coverage, despite their initial announcement in the 2015 Budget, and the government’s more concrete commitment in Budget 2016 after a tentative first consultation. The current consultation, open until tomorrow (16 December 2016), renews the commitment to extending student loans. Starting in 2018-19, these loans would allow doctoral students to borrow up to £25,000 across a maximum of six years. They will be eligible to all students in England at UK institutions not in receipt of research council funding.

Importantly, the loan is intended as a “contribution to the cost of study”; it will not cover the full cost of doctoral study, nor will it be means-tested. This calls into question the claim that the loan will widen access in a meaningful sense. It could certainly make doctoral study a more attractive prospect for the few wealthy self-funders, but a funding gap will still exist for those less well-off students.

Debt will weigh more heavily on students’ minds, too: for those from a low- to middle-income family, it is even less likely to be cleared before the 30-year time limit.

The government’s 2015 consultation found that funded scholarships should be maintained or increased as a better alternative to loans, broadening access to fully funded study. But future access to European Union funding is uncertain, thanks to the Brexit vote. Doctoral loans will render the future of research scholarships doubly uncertain. It is likely that increased pressures on university finances will see scholarship places reduced or downgraded to fees-only awards, despite the government claiming that this is not their intention.

According to the consultation document: “The economy needs a highly-skilled, research-driven workforce”, and doctoral students can buttress this by providing a “critical mass within research groups”. On this view, doctoral students are valuable as the heavy lifters of research teams. As the new workers of the knowledge economy, their role as educators – as teachers, demonstrators, and public scholars – is ignored.

The financial cost to students is brushed over. A doctorate does not always improve graduate salary; research shows that on average wages are increased by only about 3 per cent compared with master’s degrees, with that increase being substantially lower in the arts, humanities and social sciences. To get true value from their degree, students must do considerably more on top of their doctorate. As for doctoral students wanting to remain in the academy, the lack of tenured positions suggests that they should maybe think again.

The social and personal cost to doctoral students is also ignored. A doctorate, unlike other types of degree, is highly pressured and in effect open-ended, with students often expected to work in the evenings and at weekends. For students who already have a funding gap, it’s necessary to work part time on top of this in order to live. The loan will expand the number of students doing this, with potentially devastating effects on their mental health.

This is a growing problem among doctoral students and in universities more widely, and there seems to be no sign of it slowing down.

Businesses are seen as the main beneficiaries while bearing none of the burden: the cost of funding doctoral study is transferred, via the loan, to the individual student. As the consultation tells us, “the costs and length of time it takes to secure a doctorate make most employers understandably reluctant to invest up front”. The loan is, in effect, a subsidy for private capital.

The loan may also be a subsidy for private, for-profit higher education institutions (HEIs). These institutions don’t have the capital to run research programmes and offer doctorates, particularly in lab-based subjects. Doctoral loans will, we believe, build on efforts to force market competition in higher education, with the most recent plans laid out in the HE Bill.

In 2012, undergraduate loans were made available to students at alternative HEIs, leading to massive expansion with soaring dropout rates. It has been described as “the potential misuse of millions of pounds of public money”. Worryingly, for-profit HEIs do not share the same mission as the academy: profit, rather than collegiality and the pursuit of truth, is often their mantra.

Let us be clear: the answer to unmet demand is not to extend the process of financialisation and expand student debt. The current loan system is unsustainable as it is. The proper response is to expand the grants system, funded through taxing wealth in society.

Author Bios: Billy Bryan and Josh Berlyne are PhD students in the medical school at the University of Sheffield.