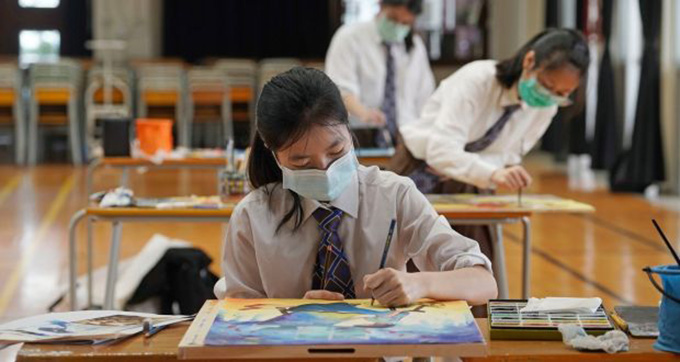 What if the experience of containment was ultimately good for the school? As with any crisis, the lessons that can be drawn from it will depend on the ulterior motives that both will invest in it. By extracting oneself from the political perspectives that will have to be analyzed at one time or another, a new horizon opens up for society, if it wants to.

On the one hand, many positive experiences could irrigate changes in practices from nursery school to university. On the other hand, many negative experiences should inform reflection on the state of our education system and its governance.

Of course, we will see a profusion of research or discourse that allows itself to bounce back on “home schooling” on the one hand and co-education on the other to break down a few doors that have been wide open for decades, one side on the distrust of some parents vis-à-vis the school, the other on the discovery that the students have parents and that the orientations are not necessarily congruent between school and families. The sociology of the 1960s has already explored this question.

If the opportunistic uses will not be lacking, if the crisis has put forward the drama of educational inequalities , these two months also invited teachers to explore new ways and parents to change their outlook on school.

What positive experience has brought is first to prove that it is possible to invent different teaching and learning situations. Aiming to compensate for the absence of a teacher in front of his students, these approaches are nothing new. It is to consider that the teacher is not a reservoir of knowledge, but an empathetic human, educational engineer, who, through emotions and methods, will instill in students the desire to dive with excitement and anxiety in unknown areas.

One can have the impression by saying that of breaking open doors, however, this is what it is about: to experience the happiness of solving unknowns and facing difficulties, while acting as guarantors in front of the students that they are capable of it and that their efforts will pay off.

The manual is rather known, it is difficult to implement because very demanding on the part of students and teachers, but it works. The international conference of the Inter-University Research Center on Training and the Teaching Profession ( CRIFPE ) organized in Montreal in early May demonstrated this through the testimony of Marie Soulié .

This most responsible teacher explained how confinement allowed her to give new light to a pedagogy of interest . Teachers who have had the chance to have this type of experience are likely to take a liking to it.

On the anthropological level, the fact that the parents had to fulfill functions usually devolved to the teachers, allows them to approach the difficulties of the exercise, but also its extraordinary vivacity. For this, again, all parents are not equal, but it was already the case before. They must feel authorized to put on a jacket, if not a gown, for which they consider that they have formal legitimacy.

By diving into the structuralist anthropology of the American ET Hall , it is a matter of understanding that the same individuals can evolve in different formal and informal cultures and that this does not in fact pose any problem, unless they are in opposition . This is where we bounce back on the Bourdieusian approaches to La Reproduction . Even if the approach has many limits, the subject is still relevant and takes a new light during this period of crisis.

For the rest, the inventory of the actions of the many teachers, principals would be too long to do, but it is undeniable that they have been up to the task. They contacted the families by telephone on a regular basis and, realizing this link of the Republic, they told the parents how much they counted.

It is not at all the same thing to be summoned to school in the famous parent / teacher meetings and to be contacted by the school to hear yourself ask already, if all is well, then to investigate what can be done with children.

A study in progress in our laboratory among the 3400 teachers who took care of the children of caregivers during confinement underlines the major importance of the relationship. The teachers’ first apprehensions related to children’s behavior. However, things went rather well given the small number of students, probably also made aware by their caring parents of gestures and protections.

The study also shows that the possibility of having access to flexible spaces and quality buildings made their task easier and that, despite the good overall conditions, regular hand washing remained a difficulty.

In addition to the primary positive effects, one can dream that the experience has secondary positive effects thanks to the analysis of what did not work well. First of all, we should return to the trap of an overly centralized national system, while regionalization and accountability have shown the effectiveness of many countries in the face of the crisis situation.

Can the Covid-19 crisis allow the Republic to discuss a real regionalization of the responsibilities of Education, with its advantages and disadvantages, rather than appealing again and again to Jules Ferry so that nothing ever moves ?

Education is the number one justification brandished by all politicians, but never, never will any elected official be punished for his actions or inactions in this field. This is part of the neutral ideological field, we can debate endlessly, there will be no influence on the votes. At the regional level, the school could have a more decisive weight on political projects with regard to Education.

On the same register of inequalities, the question of the digital right is raised. The study of the connections to the various digital work environments heavily paid for by taxes shows that vocational high schools are the ones that have been the least users of the possibilities offered by technologies. However, users of vocational lycées are also those whose families are most in difficulty, often in precarious professional, social and spatial terms.

A large digital equipment plan for the poorest, those who are most in difficulty or suffering in the education system is a republican necessity to which the State in its centralized forms cannot effectively respond. Of course, we no longer count the digital plans whose accounting expenses are valued, but whose impact we omit to verify, and above all the animation of the field. Could we not finally seriously deal with this issue  ?

A few years ago, to become a teacher, you needed to have a language skills certificate and another in technology use ( C2I2E ). For the overwhelming majority, this was seen as an unbearable and unnecessary thought. So high expected positive effect of this unfortunate episode epidemic is probably still the question of the formation initial and continuing teacher.

Will the new reform underway make a difference? Under what conditions? Will it take into account what we have learned from the unprecedented crisis we have experienced?