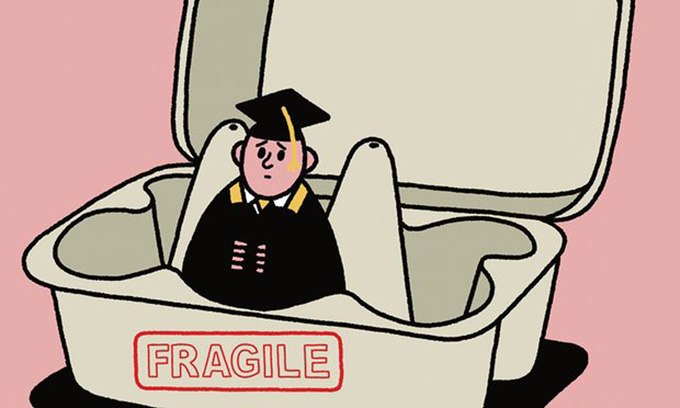 For some time now colleges and universities across the country have been roiled by debates over so-called “safe spaces.”  On one side stand those who argue that many members of the higher education community, especially various minorities, need “safe spaces” free from potentially harassing behavior and verbal abuse.  Sometimes they have gone too far and demanded that entire campuses and classrooms should be “safe” even from constitutionally protected expression that they dislike.  On the other side stand those who argue that such demands intrinsically limit freedom of expression.  They have often gone too far in denying the reality of racism and other forms of bigotry on campuses, sometimes demonstrating extraordinary insensitivity to those who may feel threatened.

The two sides have frequently appeared to be speaking past each other.  Indeed, as I’ve suggested in several previous posts to this blog, for example my response to a widely publicized letter to first-year students from a University of Chicago dean, the debate itself can be hopelessly muddled and confused.  For one thing, there is far too often confusion between calls for specifically defined “safe spaces” and calls for making entire institutions “safe spaces.”  Sometimes an effort has also been made to distinguish “intellectual safe spaces” from physical ones, denying the obvious reality that intellectual activity must by definition take place in specific locations.  It would simply be absurd to deny that colleges and universities have always provided specified “safe spaces” for both defined sub-groups and certain ideas.  How else to describe, for example, the Jewish Hillel society or the Catholic Newman Society?  How do these differ from centers for, say, LGBTQ students or for Muslim students?  And aren’t academic societies and clubs devoted to specific schools of thought a form of “intellectual safe space?”  In fact, aren’t certain disciplines — ethnic studies or gender studies come to mind — “safe spaces” for the development of often unpopular ideas?  Indeed, the same might be said for the various pro-market “centers” established by conservative donors like the Koch brothers.  It’s difficult to imagine the advancement of knowledge without the provision by colleges and universities of such varied “safe spaces” for the development of new knowledge.

But what about the institution as a whole?  Should colleges and universities as a whole be considered “safe spaces” and if so, safe for whom and for what?  One answer that I like was provided by UC Berkeley economist Bradford DeLong, who wrote on his blog, “a university is first of all, a safe space for ideas; second, a safe place for scholars.”  The election of Donald Trump as the next president of the United States has raised concern about both of these aspects of safety.  The AAUP’s recent post-election statement — signed by AAUP president Rudy Fichtenbaum, AAUP-CBC Chair Howard Bunsis, and myself — warns that given the hostility to science, especially climate science, previously expressed not only by Trump but by many other Republicans and the president-elect’s call for an “ideological screening test” for admission to the United States, his election may well endanger the safety of ideas.  But so far we really can’t say to what extent such concerns are justified, since Trump has yet to take office or even propose appointments or policies.

However, we do have evidence of the election’s potential impact on the university as “a safe space for scholars.”  And that evidence is deeply troubling, if not downright frightening.  For in just five days after the election accounts of bigoted physical and verbal attacks on college and university students have mounted.  The campus incidents are part of an extraordinary upsurge in hate crimes after November 8.  “Since the election, we’ve seen a big uptick in incidents of vandalism, threats, intimidation spurred by the rhetoric surrounding Mr. Trump’s election,” Richard Cohen, president of the Southern Poverty Law Center (SPLC), told USA TODAY.  SPLC has created a web page to funnel the reports, and received more than 200 within 24 hours. The Council on American-Islamic Relations also said it has seen an increase in complaints made to its offices, so much so that it was moved to urge prayer leaders and imams to address fears, said Ibrahim Hooper, the organization’s communications director.

In one widely publicized and horrifying incident involving two universities, University of Pennsylvania officials said that a student from the University of Oklahoma has been suspended — and more people may be involved — for targeting Penn black freshmen with racist hate messages in a cell phone text-messaging app under the group name “N- Lynching.”  The suspension came early in an investigation by the FBI and campus police at both universities.

Penn’s campus was shocked and disgusted when the first racist and violent messages began to appear Friday on student cell phones via the app GroupMe, popular with college students and others. The messages came from a person or people using the name “Daddy Trump.” “Heil Trump” also was written in the messages by the group, calling itself “MudMen.”  Officials said the “MudMen” group appeared to be based in Oklahoma.  In all, the messages named 161 people, including those who created the group and the students who were targeted. Two students associated with the GroupMe account have Facebook pages indicating one is a student at the University of Oklahoma, while the other is enrolled at Oklahoma State University.

Also in Philadelphia, a black woman studying at Villanova University was attacked by a group of white men chanting “Trump! Trump! Trump!” on campus.  According to Philly.com, the unnamed woman was walking through a tunnel on campus — which is located north of Philadelphia in the township of Radnor — when the men attacked her.  Chanting the name of the president-elect, the men knocked the woman down, causing her to strike her head on the pavement.

In Oregon, two bathrooms at Reed College’s library were defaced with racist, homophobic, anti-Semitic and pro-Trump graffiti Saturday night. A spokesman for the Portland college said the graffiti was found around 9 pm and painted over by 11 pm, but college officials don’t know who committed the vandalism. The college library is open to students and the general public.

In Massachusetts, at Wellesley College, Hillary Clinton’s alma mater, students awoke the day after the election to find a large truck driving slowly through campus with a Trump flag flying off its back, harassing students. The two men in the truck went to the house for students of African descent, rode around campus yelling at students, and spit towards a student when asked to leave. The two men turned out to be Edward Tomasso and Parker Rander-Riccardi, students at Babson College, a neighboring college.

Other incidents include the alleged robbery of a Muslim student at San Diego State University by two men who “made comments about President-elect Donald Trump and the Muslim community”, before stealing her purse, rucksack and car. At San Jose State University, sophomore Esra Altun was on her way to collect her sister when she says someone grabbed her hijab from behind and yanked it backward, choking her. “I was trying to gasp for air,” Altun told The Mercury News. “I couldn’t say or do anything. I was paralyzed.”  White students at Southern Illinois University reportedly decided to put on blackface and pose in front of a Confederate Flag to celebrate Trump.  A student from the Christian Baylor University in Texas, said she was walking home from a class when a man shoved her off the pavement. “He said ‘no n*****s allowed on the sidewalk’. I was shocked, I had no words,” she said in a video posted on social media.  “Another guy said ‘dude, what are you doing? That’s not cool’. The guy said: ‘I’m just trying to Make America Great Again’.”

One incident, at Texas State University in San Marcos, made clear that faculty and administrators may also be vulnerable, not only students. Police there were investigating fliers posted in bathrooms throughout the campus that called for violence and “vigilante squads.”  “Now that our man Trump is elected. Time to organize tar-and-feather vigilante squads and go arrest and torture those deviant university leaders spouting off that diversity garbage,” read one of the fliers.

While these incidents are less numerous than some even more frightening occurrences at high schools and even elementary schools, I don’t doubt that there are more examples on college campuses that are as yet unreported.  (According to SPLC, the largest number of incidents reported to them were from K-12 schools.)  And even if they are not, isn’t this more than enough?   Clearly the demand for “safe spaces” now takes on new meaning and significance.  For it is the obligation of colleges and universities to ensure that all our students are safe from the threat of physical assault and racist verbal abuse.  And we have a special obligation to minority communities in our institutions — people of color, religious minorities, especially Muslims, the LGBTQ community and the disabled — to ensure that they may study and learn in safety and freedom.

Let me stress that I, for one, do not blame president-elect Trump for these incidents, although it is atrocious that he has so far failed to publicly condemn them and to urge his supporters to exercise restraint.  Those to blame are the perpetrators themselves, whether students or outsiders.  In most, if not all, of the above instances college and university leaders have responded quickly and firmly, issuing statements of support and, where appropriate and the culprits have been identified, filing charges. But it is time for the faculty too to weigh in, whether our own institutions have been touched directly by this outpouring of bigotry or not.  One positive response comes from faculty members at UCLA, who have been collecting signatures on this online petition:

We, the undersigned, are UCLA faculty who stand united against acts of hate and bigotry directed at our students and fellow employees in the wake of the election of Donald Trump. Words and acts of hate are forms of violence that threaten our mission as a public research university committed to the betterment of our global society through teaching, learning, and the dissemination of new knowledge.

We pledge to stand up for, support, and defend the most vulnerable among us, those deliberately targeted in the lead up to the election, and those who are now victims of hate in its wake – members of our community who are undocumented, people of color, LGBTQ people, Muslims (and other religious minorities), immigrants, the differently abled, and women. We have seen firsthand the anxiety and fear generated in the months leading up to this election and in its aftermath.

As educators, we affirm UCLA’s commitment to fostering an environment that is inclusive and respectful of diversity in all its forms — in our classrooms, our offices, on campus, and beyond. We are prepared to defend and support our campus community as we protect our democracy.

Please add your name to this statement, and we will share it with the UCLA community.

It would be wonderful if faculty members at other institutions organized to make similar statements.

And, with respect to those among our students who are undocumented and have genuine reason to fear not only hate crimes but deportation under a Trump administration, Carolina Valdivia, an undocumented immigrant since the age of 12 who is currently pursuing a PhD in education at Harvard, has posted a useful list of suggested actions for administrators, educators, counselors, and students here.

No matter what one may think about the debate over “safe spaces” in the past, it should be clear to all that the issue of safety for many of our students is now quite literally a matter of the most dire consequence.  Our campuses must at minimum work to ensure that all in our communities are physically safe and free from abuse, especially at this difficult and extraordinary moment.