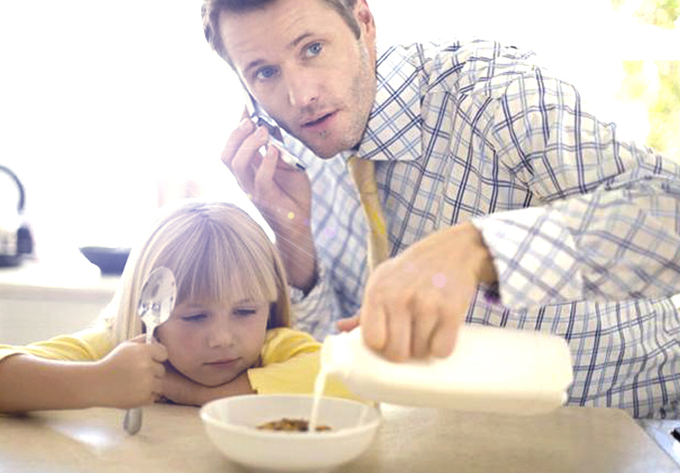 It’s 4.30pm and the new student welcome event is in full swing. There’s even the odd bottle of wine doing the rounds. Practically no one shows any real desire to leave. No one, that is, except me. Just as everyone else is piling into the cupcakes (again!) or grabbing some more nibbles, I throw on my coat, shoulder my bag and head for the door.

“Where are you going?” asks one of my friends.

“Off home to my wife and son,” came the response.

“Don’t you see them often enough?” she prods cheekily.

“They are the people I most want to spend time with in the world,” I said, making the rest of the room smile and coo at the ‘cuteness’.

It was a small exchange and one that inadvertently brought me some kudos but it said more than meets the eye. In a world where guest lectures often end at toddler bed times and career-building involves three day conferences hundreds of miles away from home, tough decisions have to be made. And not just by mums.

I really appreciate the growing recognition of the fact that being a mum and a researcher places particular demands on women. It is now wonderfully fashionable to see Doctor mummy blogs, support groups, and campaigns. All this is great. Sadly, daddy pressures rarely appear on the radar.

There are several reasons. Men, traditionally, have attempted to reconcile the potential conflicts between work and family by preferring the former.

The stereotypical image of a “dad” is still one of someone who works late and then treats home as a place to put his feet up and read the newspaper before having his dinner, watching TV and going to sleep.

Of course, we all know that this looks nothing like reality but it still says something that we need the term “career woman” but not “career man”. We tend to assume that men will put their careers above everything else.

What if they don’t? What if they choose to skip most guest lectures in favour of messy dinner tables, dropped chips, and nappy changes? What if they decide that they want to integrate career and family, childcare and work, rather than treating their children like distractions?

To be fair, I have to say that my own department gets this absolutely right. It is chock-full of young families and there is a real understanding of the need to integrate parenting and work. After the birth of both of my kids, my part-time status allowed me, with the support of my supervisors, to get back to research on a suitable schedule. I just wished sleep had been as easy to sort out!

What has been challenging, however, has been dealing with conferences and data collection. As far as conferences are concerned, I have made the most of the few great ones taking place at my own university.

Choosing when and where to go on top of that has been anything but easy. For the first year after my son was born, I simply chose to stay at home. My reasoning was that there would always be more conferences but children don’t stay babies for long.

Nowadays, when it comes to conferences, I make decisions in partnership with my wife and within strict limits. After having one crazy week, where I had a board meeting in England, an interpreting job a few miles away and a conference at my uni back-to-back, I knew that I needed guidelines.

We now have limits as to how much I will be away in any week and any month. On this, resources such as Bill Hybels’s book Simplify have been a godsend. Once I knew my time priorities, I felt far more confident to say no, or at least, not this time.

Data collection was even more fun. Traditionally, academics go into the field alone. I took my wife and children to everything except my pilot study. We found out my wife was expecting our son shortly after she had come with me to a conference I was studying in England. She was very clearly expecting our daughter while she was with me in Germany for another data collection trip. We are planning to take both of our toddlers with us to a seminar I am leading in Southern Europe later this year.

All this adds up to some amazing memories. I don’t think I will ever forget doing a research interview on a three-seater outdoor swing, while my year-and-a-bit-old son sat inside “serenading” his mummy on the glockenspiel. Transcription is much more fun when it makes you feel warm and fuzzy inside.

But now we have two children (and a third due Christmas 2015), I know that life will only get more crowded. I still plan to integrate family and research as much as possible. Yet every researching parent will tell you that the System still needs tweaking to take the needs of dads (and mums) into account.

Could conferences offer family activity programs? Might the packs we get at training events include colouring pencils and join-the-dot pictures? Could guest lectures be streamed or recorded for watching later, or, here’s a shocker, might they take place earlier in the day?

My children have already taught me a whole lot about research. But mostly what they have taught me is that research will still be there after one more story, one more nappy change, and after my daughter is finished “singing” her unique version of “Horsey, Horsey, Don’t You Stop.” And anyway, we all know you work better with a smile on your face (and yoghurt on your sweater).