While I was in Canada I got an email from Agnes who is finishing the writing part of her PhD. After some kind words about the blog she got down to business:

<p>“… I have a question to you that I could not find an answer to elsewhere. I am now writing up my PhD work and organising the ‘front matter’ section as well. Some of the theses and articles I have seen included a glossary in the front matter. These concise descriptions of the main terms of the piece always seemed so smart and put together; a sign that the authors knew exactly what and how they wanted to communicate.</p>

I know that a glossary should include the most important terms and phrases used in an alphabetical order, especially if they are used in an unusual way. But I have not found any strategic guidelines on how to do it well, or whether it is really a good idea to write it at all…”

I was travelling and only responding to urgent messages, so I filed Agnes’s message in Omnifocus and promptly forgot about it until it appeared on my to do list yesterday. I thought answering this email would be simple. I went straight to my favourite blogs on writing – Patter, Explorations in Style and Doctoral Writing Sig. None of them had anything specific on glossaries, so I did some Googling. Agnes was right – lots of descriptions of glossaries, but no ‘how to’.

Frustrated now, I went to my bookshelf which is bulging with just about every book you can imagine on writing. Here, take a look:

The top shelf of both cases is just books on academic writing. While I have some favourites, to be honest, I’ve never read most of them. I buy these kinds of books on the assumption that a day – perhaps a day just like this – they will have the answer I need. Unfortunately my books only had cursory mentions of the glossary, no deep treatment of the topic. Yes, a glossary should contain key terms. Yes, a glossary should be alphabetical. But the books were mute on the rhetorical purpose of the glossary as Agnes had requested. By rhetorical I mean a glossary is meant to affect the reader – to leave them with the impression that a knowledgeable, competent scholar is in charge.
Clearly I was going to have to attempt something new. Time to really get my nerd on. I went back to first principles and asked myself some research questions: What is a glossary? Where did it come from? What did the first ones look like? I Google searched the origin of the word which confirmed my suspicions – it was Latin, but also late Middle English: 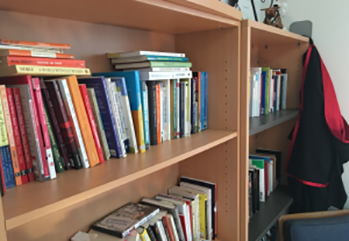 Interesting. The glossary was clearly older than I thought. I went to the bookshelf I have devoted to university history and the index of “A history of the university in Europe Volume One: universities in the middle ages” had 13 mentions of various forms of glossary. Pay dirt!
Briefly, a gloss is an annotation or brief note about the meaning of a word in a text. Back in ye olde days of academia parchment was made of animal hide (very expensive to produce) and writing was laborious. A book could cost as much as a house and were often chained to the shelf the way that expensive leather jackets are in clothing stores to prevent theft.
In this early academic culture, summarising and summaries took on a life and importance that is hard for us to imagine now. Glosses were essentially the academic blog posts of their day – short, easily accessible, approachable translations of much longer, denser and harder to find texts.
It was in Law scholarship that glosses took on special significance and sophistication, As Antonio Garcia y Garcia put it:

“… this [law] literature began with mere interlinear or marginal glosses elucidating the meaning of words, and in its final stage produced great critical apparatuses or commentaries, consisting of extensive and continuous glosses on an entire collection of laws, which strive to capture not only the meaning of each word but the sense of the [original] text and the legislator’s intention”

Apparently the people who put together these epic collections of glosses were called ‘glossators’. I immediately thought of this: 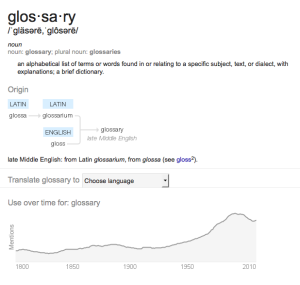 Ahem, anyway – where was I? That’s right, I wanted to help Agnes? From my reading and research I can now argue that a glossary is a collection of key terms that you use in your thesis, summarised for the reader so as to make your text more accessible, approachable and authoritative. Here’s a step by step to producing one.
Step one:
Decide if you need a glossary or not. I would argue that you only need one if it’s going to be of genuine use to the reader. Start by asking yourself a series of questions:

If you answered ‘yes’ to most of these questions your thesis would benefit from a glossary.

Step two:
Selection of terms is critical. A glossary should demystify terms for the reader, not state the obvious. If you put a whole bunch of common terms there your reader will feel like you are talking down to them. It’s vitally important to realise that you are not the best person to identify what needs to go in the glossary. You are suffering from the Curse of Knowledge – you don’t know what it’s like not to know what you know. So ask a colleague or fellow student (not your supervisor – they have the curse of knowledge as well) to read your whole text and underline words they don’t immediately know. This will give you a starter list, but it is clearly a big ask. You could offer to do this for another PhD student and swap texts.
Step Three:
Reach a bit further for terms to include by thinking very carefully about your potential ‘cross over’ readership. Agnes will definitely need to do this step as she is working in a cross disciplinary project. One way to do this is to work on defining the audience for the writing. I find a Venn diagram helpful. Here’s one of the possible audiences for my thesis (which was about how architects used hand gestures when they were teaching students in case you were wondering): 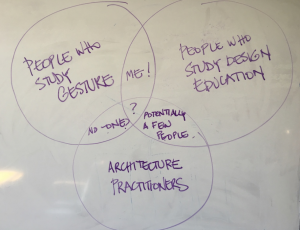 This list starts me thinking about who might have a need of the glossary and what they need it for. Could I have more than one glossary? I wrote two literature reviews to accomodate my different readers, perhaps I could have made two glossaries as well?
Step Four:
Start generating a list of terms which each audience will be familiar with and ones that they wont. Here’s a table I generated to help me in this thinking process: 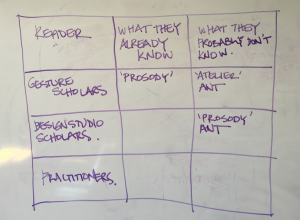 You can see that some terms are cross overs, others might be unfamiliar to all. The table is just a tool to help you brainstorm in a structured way. Again I suggest you will need to sanity check this list with someone who is not suffering from the curse of knowledge.
Step Five:
Where would the glossary go? I would suggest that it will depend a bit on length. Shorter glossaries can go at the start, really long ones might be an appendix, or a combination of both. Be creative! Your readers will thank you.
So there you are Agnes – and anyone else who might need to find their inner glossatator I hope that helps. If you have suggestions or refinements, I’d love to hear them in the comments. And hey – if your skills of Google are better than mine and you found the blog post I was looking for let me know. Any other questions like this? Please send them through. I love it when someone hands me such perfect blog fodder!