It really is amazing what college has become. The following is the number one reason students go to college today:

“It’s where you go after high school.”

I don’t blame the students for this reason: they’re trained (heck, I was trained) from an early age to believe that college was the thing to do after high school. It…was simply inconceivable to do anything else after graduation.

Anyway, the “leaders” of higher education don’t care that they’re hurting kids, and so gleefully reduced standards and relaxed entrance requirements, all in the name of growth (more accurately, to get those sweet, sweet, student loan checks).

You’d think they’d be satisfied with the lives they ruin but…no. Getting 70% of high school graduates to sign up just isn’t good enough. No matter what the growth is, it’s not good enough. In a lifetime of working in higher education, the only thing I’ve ever heard an administrator ask for is moar.

The thing is, pursing higher education really isn’t supposed be “something you just do.” For it to be worthwhile goal for a person, that person has to actually care about learning, has to want to learn something.

The above is a typical conversation I’ve had with many a student. These are generally students that don’t eventually graduate. Below is a more rare conversation:

Me: “Hey, [math major], do you know how to do [something from a recent course]?”

The above is a conversation I have with students who graduate, on time. A huge part of wanting to know things is not wanting to be ignorant of things. When a real student, a scholar, doesn’t know something, something that should be within his grasp, he does something about it: he learns. These are the people for whom higher education, as it’s supposed to be, is for.

Granted, it still exists for such people, but so much of higher education today is for coddling of students. So many people come to campus and are asked “Can you check a box qualifying for student loans?” and it’s the only question they are asked. It’s the wrong question, by far. The question we should ask incoming students is “Do you want to learn?”

Instead of emphasizing how the campus is set up for learning, our administrators show off the climbing walls, brag about the winning sportsball teams and, bottom line, attract way too many who come on campus for the wrong reason.

I don’t want to come across as elitist here, everyone who honestly wants an education should be allowed to pursue it (and, hey, our library system and internet are great ways to get it), but the sheer greed of administration in attracting any warm bodies possible is now bordering on the ridiculous.

How bad is it? Consider Community College of Philadelphia’s latest attempt to suck more people into the system: 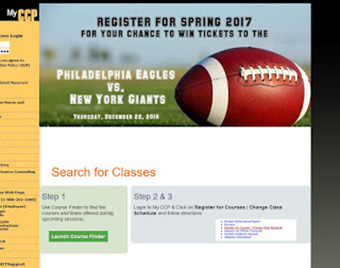 Is this really the way to attract students? According to official stats, this so-called “2 year” school has a 2 year graduation rate of 0.7%. Granted, I’ve seen worse at other fake state schools…but the issue I have isn’t the amazingly bad graduation, it’s the emphasis on growth over everything else, even when it’s very, very, clear the “community” school is harming the community. It’s disgusting that growth is the only metric.

“I went to college so I could get a chance at some football tickets. Woo!”

–seriously, attracting this type of student may be a factor in the school’s 0.7% graduation rate. Why don’t any administrators, with their Ph.D.s in Leadership and Integrity, understand this possibility?

Our higher education system, already grown beyond all sanity, has a problem. We’ve squandered all the wealth from the skyrocketing tuition, and overbuilt to the point that now most every school must grow, grow, grow, merely to just barely stay afloat.

But there’s no longer a pool of indoctrinated applicants, the system has already got those, and now depends on getting more very year. Now our schools must pursue the kids who resisted the indoctrination, and tempt then in other places.

“I went to college so I could get a toaster!”

In olden days, when banks had to attract customers (instead of just being handed gargantuan sums of fiat money from the government), they offered strange things to get people to sign up for a savings account (note for younger readers: in olden days, it was a decent idea to save money in a bank, to get a return, as opposed to nowadays where’s it’s pure idiocy to do so).

A checking account isn’t a lifetime commitment, however. College, or at least education is, and I’m not even touching on student loans here. Our institutions of higher education are now scrape, scrape, scraping the bottom of the barrel, at the point now where our colleges honestly believe:

“If you want a couple of free football tickets, then, YES, you are college material!”

If people only knew that sub-1% graduation rates are common at our community colleges, I suspect there’d be rioting. Unfortunately, not nearly enough people know this, and, more importantly, the “leaders” of these institutions don’t care.