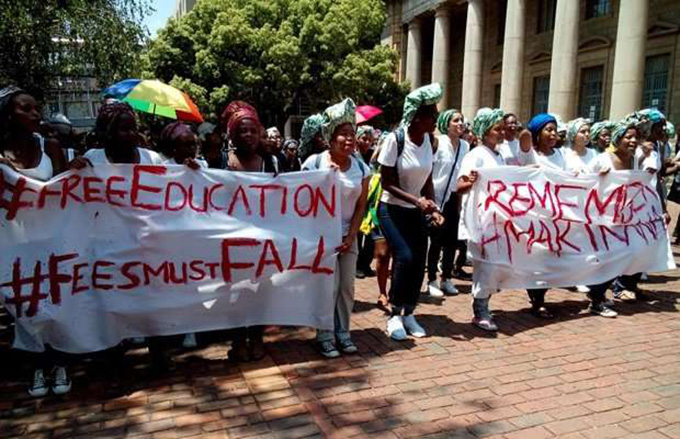 The most widely respected world university rankings have all recently published their latest results. The release of the Times Higher Education 2016-17 and Quacquarelli Symonds 2016-17 rankings have coincided with a resurgence in protests at many of South Africa’s universities.

Most of South Africa’s universities have dropped down these ranking tables.

Some people argue that the protests – which relate to fees, access and transformation and have occurred on and off for the past 18 months – are having a direct effect on universities’ global standing on rankings tables.

But it’s unlikely that the protests themselves are directly affecting rankings. Instead, decades of government under-funding in the higher education sector may be at least partly to blame.

The University of Cape Town (UCT), where I am a deputy vice-chancellor, has handed a memorandum to the Department of Higher Education and Training. It states:

This may seem unfair: the government has dramatically increased the amount of money it gives to universities. But so have students. And educational inflation has played a part too. In real terms, the amount universities receive in state subsidy as a proportion of their total income has declined from 49% in 2000 to 40% in 2012.

Funding has a direct effect on many of the indicators that are used to measure performance in world university rankings. With less funding, staff-student ratios rise. Top staff, who produce the most papers, leave for more lucrative salaries abroad. Universities can’t afford to send their academics to many conferences, so fewer conference papers are produced.

How rankings are calculated

UCT has, for some time, been able to compensate for the drop in government funding for research. We’ve done this, for instance, by working hard to increase external income – particularly research grants and donations. This has been remarkably successful.

But not all South African universities are in a position to do this. And a point will be reached where external income, for which there is increasingly tough competition, is not enough. UCT may have reached that point. Some other universities will have reached it long ago.

Universities don’t yet need to despair. First of all, a drop in rankings does not mean a drop in actual performance. On most of the indicators, in most of the rankings, UCT continues to improve as it has done for many years. A number of our sister universities are, likewise, improving across several indicators: producing more papers, bringing in more income, increasing their proportion of postgraduate students – all important indicators of research performance.

But it is perfectly possible for an institution to improve its scores and still see a significant drop in the rankings. This is because scores are ranked and so performance is relative. If other institutions have improved their scores even more than yours, they will climb above your institution in the rankings.

This is important. It’s exactly what is happening to South African universities. Institutions from elsewhere in the world are improving much more significantly. And it is no coincidence that the countries which are seeing a rapid rise in the rankings are mostly those that have chosen to invest heavily in their universities.

The most startling example is China, whose various projects to produce top-ranked universities, such as the C9 initiative, are paying off spectacularly. Another well-performing BRICS competitor, India, spends 1.23% of its gross domestic produce (GDP) on tertiary education. This is compared to South Africa’s weak 0.74%.

There is one way in which the student protests themselves, rather than the under-funding that caused them, may directly affect some of the indicators by which universities are measured.

Each ranking uses different indicators to measure a university’s performance. But on the whole they are a combination of hard data, such as citations – the number of times an author has been cited, or referred to – and ratio of staff to students. There are also more qualitative “reputation” indicators. These are achieved by asking academics and employers to list the top institutions in their fields.

It is these “reputation” indicators that could be directly affected by the protests. Although they are intended to be objective, it does not require a great stretch of the imagination to believe that some academics who see South African institutions in constant crisis, with lectures cancelled, exams postponed and buildings burned, are affected at least subconsciously.

South African institutions were particularly hard hit in the reputation indicator in THE’s latest rankings. However, some universities that were affected by the protests bucked the trend: the University of the Witwatersrand rose in the THE rankings. So there is no clear evidence of a causal relationship between the protests and the universities’ performance in the rankings.

But does it matter?

In assessing the extent to which #feesmustfall protests might have affected South African universities’ rankings, I have left aside the much larger and more important question of whether it matters.

Universities certainly regard rankings with a measure of caution. Rankings are very imperfect measurements of excellence. They take no account of the contexts in which universities find themselves, particularly those based in developing or emerging economies. They do not measure some of the functions of a university that the sector would regard as critical: for instance, whether the research a university undertakes makes a difference, or whether the graduates it produces are thoughtful and productive citizens.

Nevertheless, the drop in rankings has been greeted with consternation in the media. The coincidence with the university protests could lead to a damaging narrative that the country’s universities are inevitably “going to the dogs”.

I can categorically state that UCT is nowhere near that kind of precipitous decline. However, if under-funding from government continues to decline and the issue of fees is not resolved, I am less confident of our and our sister universities’ future.

Author Bio: Danie Visser is the Deputy Vice Chancellor at the University of Cape Town