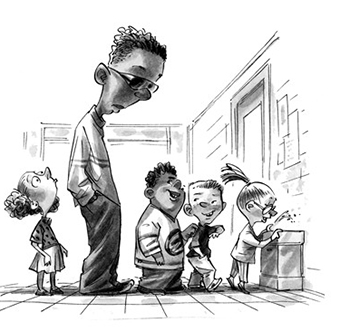 The main reason public schools are cheaper has nothing to do with profits. While non-public schools get to set their tuition (and thus continue to raise tuition to whatever is the most they can take via the student loan scam), public school tuition is typically set by the state. Tuition still goes up rapidly, of course, as our public school administrators spend every dollar as fast as they can, lest future state budgets see the surplus and say “hey, the school doesn’t need it, we can spend it on a different boondoggle.”

Governments have rather caught on to the game, and nowadays schools can only raise tuition if they can justify a reason for it, and the justification can’t simply be “we spent the money on administrative bonuses” like in prior years.

Increasingly, state schools can only raise tuition if they can show they’re doing a good job.

The reward for good teaching in universities? We can push learners deeper into debt

Now, I’m all for accountability, but, alas, administrators get to determine the rules by which it is determined the school is doing a good job. What are the goals of the institutions?

“…based on three crude metrics: student retention and progression; the number of students in paid employment after graduation; and scores on selected items of the National Student Survey. Universities will be classified as outstanding, excellent or meeting expectations, with a pre-determined proportion in each category.”

Ah, retention, the “butts in seats” model of education that has done so much harm, has led to community colleges with 0.6% graduation rates being classified as “successful” because of all the butts in seats, and huge remedial programs that start students in 3rd grade material, and then administrators act shocked, shocked, when nobody is doing college work after two years.

Ah, but now there will be “progression”…I do see a little hope here, but seeing as social promotion has now come to college with nary a peep of protest, I suspect this will be a meaningless measure in short order—I’ve been at state schools that mandated an 85% passing rate, so I know passing rates mean nothing. Progression as a measure will just move the mandated passing rate up closer to 100%.

Please, understand that I don’t want people to fail. I’m not a jerk, I’d like to see everyone succeed and do well, but if a “college education” just means “4 years of social promotion where everyone gets a diploma” I just don’t see how a college degree is supposed to be meaningful to a thinking adult, any more than I can see graduating the 4th grade is meaningful to an adult. And, of course, I see no reason why everyone needs to be forced into a lifetime of debt for a socially-awarded diploma.

“Job placement” is another problem with our inflated tuition. Because higher education means big debts, students are forced to turn their education into job training. Again, jobs training is a perfectly legitimate thing to do…but universities really aren’t set up that way. The whole system is designed to create scholars and academics. Even if job placement were a legitimate way to measure education, this measure gives far more power to schools in booming economies than in less powerful economies. Why does the current economy affect the “education” at the school?

The National Student Survey, on the other hand, strikes me as an excellent idea. Yes, I know, standardized tests are horribly over-used in the mandatory public school system, but the sad fact is GPA means nothing in college, the average grade in college is A-, so that there’s just no way to distinguish college graduates based on GPA. Accreditation has nothing to do with education, so we can’t distinguish graduates based on school, either (beyond the very top tier schools).

But a standardized test for all college graduates could change all that overnight. Everyone takes the test, everyone gets a percentile score, and the test has nothing to do with the socially-awarded college degree. As soon as we do this, we can look at those percentiles and tell right away which schools are offering legitimate education, and which are ripping off students. It’s what they do in the UK, and it’s a great idea.

I’ll leave it to the gentle reader to consider why we don’t do this simple thing to restore legitimacy to our higher education system.

In any event, what happens if a school does well on these performance measures, questionable as some of them are?

The reward for good teaching? If your university is found to be outstanding, you have won the opportunity to raise your students’ fees above the current £9,000 cap. And so the prize for excellence is the ability to extract more money from learners, creating yet more barriers to accessing and creating knowledge.

Isn’t it pathetic? Taxpayers pour money into the school, and if the school does a good job, taxpayers get to see their kids placed deeper into debt. It’s beyond bizarre, but I want to talk more about how idiotic the measures of success are.

Students’ own opinions of the teachers also factor into this:

It’s so funny how female superiority is crammed down my throat, every study showing females are better at, well, anything, is taken as absolute truth, and institutional policies are warped around this. On the other hand, studies show that students prefer male professors, and hey, those studies are biased and so we can’t use them. Why are there no voices of reason in higher education today?

Ok, there are few voices of reason, but those voices are restricted to the educators, and we’ve been silenced when it comes to making decisions about education. Still the educator pointing out the problems does see the end game of the standard by which tuition will be determined:

Instead, we will send our graduates out so laden with debt that they need to cling to the first job they can find – and call ourselves successful educators. We will compete like starved dogs over the reward of being able to raise fees, and proudly put our Tef status on promotional materials, ensuring a steady supply of students willing to pay inflated fees.

So what can be done? I don’t believe that universities have to resign themselves to the Tef structure as it is, or even to the notion of a Tef at all. But I can’t speak out: as a young academic, I’m far too financially insecure to risk rocking the boat.

It isn’t just that the academic here is financially insecure…he’s silenced. Like so many academics, he’s forced to make his observations anonymously, and won’t dare speak truth to the powerful administrators who control the system now, a system determined to destroy future generations, in exchange for enriching the current generation of administrators.