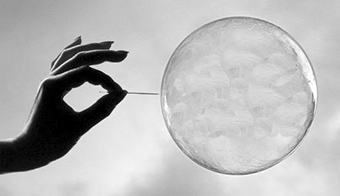 I ask the gentle reader to consider the following chart, which tracks Federal student loan money: 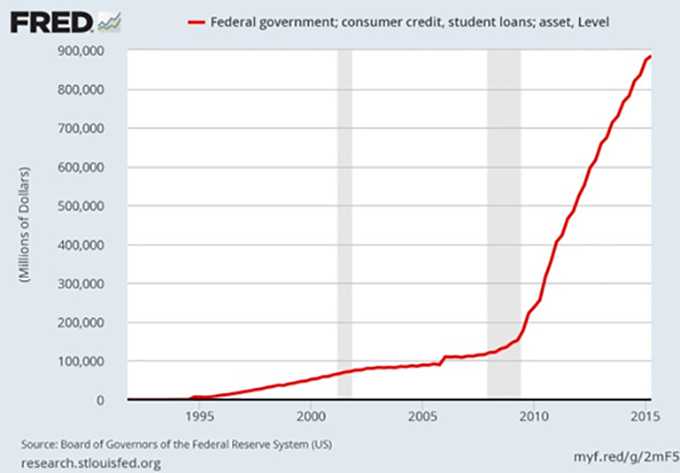 The type of curve in this chart is called “exponential,” and such curves, while easily modeled mathematically, are generally unsustainable in the real world, in the long run.< .p>

One of the results of all that money creation was interest rates dropped, and dropped fast. While $400,000 saved, generating 5%, allowed for an adequate retirement for someone with few expenses, you no longer could get a safe 5% return after 2008. Now, 1%, give or take, is about what you’ll get with a safe return…and the retirement savings just won’t generate enough.

So, retirees, in desperation, shifted their assets to riskier investments that paid a higher rate of return. As long as the market keeps getting inflated by the money creation, they should be fine (unless inflation gets out of control, of course)…but if the markets deflate, retirees are pretty much doomed. Retirement/Pension funds are currently surviving by spending their “seed money”—there’ll be a reckoning soon, although a few municipalities are already swirling down the drain. I try to focus on higher education in my blog, but it’s all related. Something similar is happening in education.

As one can tell from the graph, people going to school are taking out much, much, bigger loans than before, indebting themselves ever deeper. Again, this is a sign of desperation. The bottom line is there aren’t that many “good” jobs out there, and even fewer good jobs that don’t require some sort of degree. So, in desperation, people are indebting themselves hoping to get that magical degree which hopefully will lead to a great job riding unicorns around the orchards, picking money off trees…or something.

The trouble is, education was never intended to be such a gamble, or, as they say in the financial world, such an investment. Investment really is the wrong word, however. Putting down this kind of money for a degree, any degree, is speculation, moreover it’s speculation in a very rigged game.

Yes, it’s easy to point at the salaries graduates get when they leave top tier schools, but the bias here is well known:

In short, these schools take people who would probably be successful anyways and then claim credit for their success. It’s a great recruiting and fundraising tactic, really

“A college degree means you’ll make a million more dollars!” shouts the higher education administrator…but this is misleading rubbish. It works for some degrees, from some schools, at some geographical locations. Yes, a computer science degree from MIT is probably a secure path to a job that will pay for the loan—but most people can’t get accepted at MIT, and most people that go to college don’t even get a degree. Of the minority that get a degree, the most common degree is in Business…and this is not the road to riches, since business undergraduate degrees don’t focus on any skills not also taught in high school. There’s no actual money in such a degree.

Doing the math, most folks are financially better off being janitors than going into today’s higher education.

So, taking out loans for higher education, with the true reason of hoping to get a well-paying job, isn’t an investment. It’s speculation. The graph above is unsustainable, and the financial industry’s word for an unsustainable increase like this is “bubble.”

Bubbles pop at some point, you see, and then things collapse down to hopefully more reasonable levels. In other industries, a popping bubble means a wave of bankruptcies (unless the industry is “too big to fail”). That’s the theory for bubbles, although the rules for student loans make this collapse problematic: you can’t get rid of them through bankruptcy. Those debts will be held until the day the speculators/students die.

Will the government decide that our young people, suckered into a mostly fraudulent higher education system, are “too big to fail”? I don’t see that happening. Those students will be just as bad off as the retirees after the crash.

What will happen, however, is the government will decide it can’t support these spiraling debts forever. The massive amount of money flooding onto campuses (more accurately, pouring into administrative pockets) will stop. Most campuses are only afloat because of this money, and most will be washed away by the flood.

The only campuses that will survive are those that get rid of the bloated administrative caste, and reduce administrative pay to sane levels (honest, there was a time when the Poo Bahs made only slightly more than professors, instead of twenty to two hundred times as much like today).

That won’t be enough, however, because far fewer students will go to college when they don’t get “free” checks for doing so. Colleges will have to compete for those few students left…I trust the gentle reader understands that the way to lower prices is to have competition. It’s rather perverse that we’ll have more competition when we get rid of a bunch of schools, but the perversity comes from the student loan scam, which created huge numbers of students willing to “pay” to go to any college at all.

Give me four years to teach the children and the seed I have sown will never be uprooted.
Vladimir Lenin

I know everyone has been trained from childhood to believe college is worth any price, and that the only “non-stupid” option for the high school graduate is college, and I know I can’t dissuade anyone from this—the training and indoctrination regarding college starts at a very young age, and no blog post by me is going to undo it.

But, as I post this between one semester and the next, I beg the reader to please, please, do all you can to avoid getting deeper into debt next semester. The bubble will burst, soon I imagine, and you’ll be able to get that same degree for a fraction of the cost (and probably still far more than it’s worth, financially).