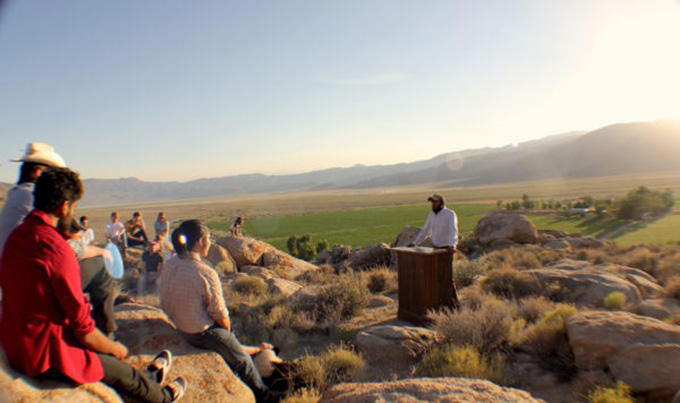 A recent column by Noam Chomsky, titled The Death of American Universities, touches on what’s happening as we revert to a slave economy. In a speech, Alan Greenspan discussed how it being increasingly difficult to get a steady job was a good thing for the economy. Chomsky responds:

“At the time, everyone regarded Greenspan’s comment as very reasonable, judging by the lack of reaction and the great acclaim he enjoyed. Well, transfer that to the universities: how do you ensure “greater worker insecurity”? Crucially, by not guaranteeing employment, by keeping people hanging on a limb than can be sawed off at any time, so that they’d better shut up, take tiny salaries, and do their work; and if they get the gift of being allowed to serve under miserable conditions for another year, they should welcome it and not ask for any more.”

The majority of teachers in higher education are adjuncts: part-time, no benefits, minimally paid workers with no job security. It has been key to the debasement of higher education into mostly being the same material taught in high school or much lower. With no security, the professors have no means of standing up to administrators that insist another chapter be taken out, that grades be inflated further, that the professors certify that the students are eminently qualified to take over the professor’s job, for much less pay.

Friend: “After deducting for rent and some food, I clear $20 a month.”
–I have friends working at Wal-Mart, just barely betting by. Yes, they can save money, but a single visit to a health clinic wipes out a year of “savings”. This is not a plan for the future. Lose that job for a month, and that wipes out the savings from 3 years or more of life…there’s no future in this.

What’s happening to professors in higher education is happening elsewhere. It’s not just the loss of tenure, it’s literally being unable to know if you’re going to have a job 3 months from now, even when you’re in a business (Wal-Mart or higher education) that’s obviously still raking in money.

People now start life in debt from student loans. They *need* some sort of security so that they can plan to pay off those debts; miss a few payments, and these debts balloon, a real problem because it’s after a certain point the loans become impossible to pay back with a minimum wage job.

Adjuncts are simply worse off than most, because they’re deeper in debt, having also paid for graduate school. It’s not simply the lack of security that’s a problem here, it’s that adjuncts are being forced into behaving unethically, being part of the problem of turning higher education into a fraud, a fraud that creates more people that start life in debt.

“That’s the way you keep societies efficient and healthy from the point of view of the corporations. And as universities move towards a corporate business model, precarity is exactly what is being imposed. And we’ll see more and more of it.”

Yes, precarity, the lack of any job security, is the norm now today. We’re a nation of truck drivers, paid for use. The microsecond there’s no need for something to be delivered, that’s the microsecond the truck driver stops getting paid. Most drivers live fairly close to the edge; once driverless vehicles become the norm (already they’re crossing the country, and there’s an automated truck on the road in Nevada, so perhaps another decade or so), I wonder what will happen to them.

It’s no different than adjuncts, paid when there are 40 students to fill the classroom to capacity, and unemployed if there are only 39 students…it doesn’t matter if it only takes 3 students’ tuition to cover the adjunct pay, profits must be maximized, always.

You can’t have a precarious job and have debt payments that must be regularly paid. It’s that simple. But the only jobs left are precarious.

Son of Deceased Friend: “Hey, you knew him for 20 years. Can you help pay some of the funeral expenses? He had a lot of bills.”
–in times past, when the family elder died, the family gathered to split the inheritance. There are legendary tales in my family about fights over inheritance, from generations ago, and friends have comparable stories from their family’s past. Those fights don’t happen anymore, but it’s not an improvement: now people die with nothing—or less!–and the family gathers to figure out how to pay the bills.

Adding insult to the injury of precarity is the starving professors get to see the fruits of their labor swiped by administration:

That’s one aspect, but there are other aspects which are also quite familiar from private industry, namely a large increase in layers of administration and bureaucracy. If you have to control people, you have to have an administrative force that does it. So in US industry even more than elsewhere, there’s layer after layer of management — a kind of economic waste, but useful for control and domination.

The author is correct that the massive increase in administration in higher education is paralleled in business…little surprise since higher education has been adopting the corporate model over the years.

How does this relate to the slave economy? People don’t think they’re slaves today, and, in a few ways, they’re not. Previously I addressed the “two tier” legal system, where most of the slave class has markedly less rights than the 1% class, where much of the slave class owns nothing, where slaves no longer are entitled to the fruits of their labor. But there’s one more thing that makes a slave: no ability to accumulate capital.

I’ve noted before that, although professors teach classes responsible for bringing in a million dollars of tuition revenue, the professors themselves only get a few thousand, a tiny percentage. Many professors are getting just barely enough—barely!—to scrape by. All the profits go the corporation/institution which distributes them to an ever more bloated administrative class.

Mr. Chomsky is a bit off here. Being intimate with higher education, I assure you the “faculty and students” levels have not stayed fairly level. Administration uses a wide array of manipulations to inflate the alleged number of faculty of an institution (for example, librarians and tutors are counted as “faculty”, among many other weird accounting procedures). But I digress.

Again, this is little different from the “old” slave economy, where the slave works an entire life generating money for the master, and in the end, has nothing, not even enough for a grave.

As people realize they’re not getting enough to survive, much less build capital for their own investment, a cry is made to raise the minimum wage. I won’t go into minimum wage here, but, honestly, if minimum wage was the real solution to the actual problem, we wouldn’t have to raise it every few years…the underlying system of the slave economy will ultimately turn minimum wage into subsistence level regardless of whether it’s $10 or $100 an hour. It’s the underlying system that is flawed, not the hourly rate of pay.

“This includes professional administrators like deans, for example, who used to be faculty members who took off for a couple of years to serve in an administrative capacity and then go back to the faculty; now they’re mostly professionals, who then have to hire sub-deans, and secretaries, and so on and so forth, a whole proliferation of structure that goes along with administrators. All of that is another aspect of the business model.”

As I’ve said before, mandating that faculty and administration be interchangeable is key to fixing higher education. What I haven’t said before, I’ll say now: we need to do the same thing in our system. While making “owners” and “employees” interchangeable is a bit unworkable I admit, our political system is clearly as badly arranged as our higher education system. If you don’t believe me, consider how many elections have basically boiled down to “Which Clinton” or “Which Bush” or “Which Skull and Bones member?” should get the vote…and how it doesn’t even matter, since “both” sides believe heavily in massive wars, massive debts, and massive bail-outs of too-big-to-fail and too-big-to-jail corrupted institutions. The slave caste is shut out of the political system as much as faculty are shut out of higher education.

Alas, Chomsky finished up on a flat note:

The article is definitely a great read, although I wish he’d offered more solutions beyond “do what needs to be done”—I’m sure folks in the WWII concentration camps could have gone far with that advice. “Don’t be frightened or intimidated by those guys with the machine guns, the future is in your hands!” Having seen facult after faculty stand up and try to stop admin from debasing education, only to be terminated in short order, “you know what to do” just isn’t helping. ySeriously, something better needed to be said. At least I offer a few hard fixes.

One comment does say what needs to be done, and I have to concede it’s a valid and simple, albeit harsh, solution:

As a former prof who watched a once-great university and university program crumble under temper tantrum management, ‘my way or the highway’ Napoleans, bitter academics who demanded we twist and fabricate our grading to lift their class member performance ratings, recruit gang rapists to play football, etc., I say let the universities and colleges as they exist today die and let’s start over. I would not send an ENEMY’S child to most colleges and universities today.

There sure are a lot of “former prof” people that used to contribute to higher education, and, after watching it devolve year after year into the mess of today, have just walked away. Soon, students will start walking away, as well.