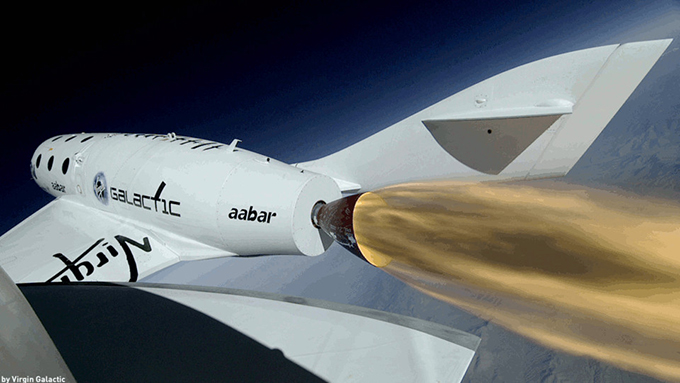 A look at the various means with which you can leave Earth behind for a weekend, or longer, as space tourism options expand.

When NASA retired and mothballed its last space shuttle, many were wondering about the future of space travel. Since then, private companies have stepped in to create a robust landscape of companies that aim to make space tourism a real possibility for passengers willing to pay the hefty price. Here’s a look at the various space tourism options for Earth-weary travelers.

The first manned private spaceflight was completed in 2004, by the spaceplane SpaceShipOne, which was built by the aerospace manufacturer Scaled Composites (SC) and funded in part by Microsoft co-founder Paul Allen. According to SC’s website, the plane reached an altitude of 100 km, or 62 miles, the so-called Karman Line where the Earth’s atmosphere ends and space begins.

Although retired after three flights, the plane was developed into Virgin Galactic’s SpaceShipTwo, which was designed to launch tourists above the Karman, according to the BBC. Unfortunately, SpaceShipTwo crashed in October 2014, killing a test pilot.

Another company, XCOR, is developing a two-seat suborbital ship called the Lynx, which on its website promises half an hour in sub-orbit for $95,000. The project has already been approved, and you can buy a ticket on their website.

Much of the progress in space tourism is attributable to business luminaries with a dream. Jeff Bezos, the founder of Amazon, has used his space services company Blue Origin to develop a reusable suborbital ship that has reached the Karman line multiple times.

Other projects to sell suborbital flights are in development by the European Space Agency and an American company called Armadillo Aerospace, according to the Federal Aviation Administration.

All these flights are just short jumps above the Earth’s atmosphere, however. For those really dreaming about going to space, there are other options.

Since 2001, the private company Space Adventures has collaborated with the Russian space agency to bring private citizens paying between $20 million and $35 million to the International Space Station and back. According to their website, seven people have taken this trip, spending seven to 12 days in space.

While the program has been on hold since 2009 to reserve seats for astronauts, the addition of a fifth Souyz spacecraft to the Russian fleet means flights can resume this year, Bloomberg wrote in 2011.

Another company, Bigelow Aerospace, is developing its own space station, where clients can spend up to 60 days in space for $26 million to $35 million, according to its website. The station could be launched atop an Atlas V rockets in in 2020, with customer visits soon thereafter.

NASA is also facilitating the development of low-Earth orbit tourism, via a $6.8B contract with Boeing and SpaceX for developing space taxis that can carry astronauts and tourists. Success of the program would mean that NASA wound no longer be reliant upon Russian Soyuz rockets to lift astronauts to the International Space Station.

SpaceX, the Elon Musk company that builds reusable rockets, focuses on rockets that deliver supplies to the international space station, as opposed to space tourism services for civilians.

Not satisfied with orbiting Earth? For the small price of $100 million, Space Adventures is offering two seats on a craft that will orbit the Moon and return to Earth in 2018

Still not satisfied? For the really dedicated, the Dutch Mars One project is offering to bring volunteer humans on a one-way mission to Mars to establish a human settlement in 2023.