The latest data from the U.S. Department of Education show that more student debt is now being repaid through the Income-Based Repayment Plan (also called the Pay as You Earn plan, or PAYE) than any other repayment plan. Nearly one in three dollars in repayment is enrolled, totaling $188 billion out of $586 billion in repayment. More debt is enrolled in IBR than the automatic option borrowers are assigned when they begin repayment. (These figures are for the Direct Loan program only; repayment plan use in the now-defunct guaranteed loan program is not reported, but Direct Loans dominate the portfolio and all new loans have been made through this program since 2010.) The milestone comes after IBR experienced rapid enrollment growth in the past two years. In 2013 only about one in seven loan dollars were enrolled.

Is this good news or bad news? Probably a little of both. 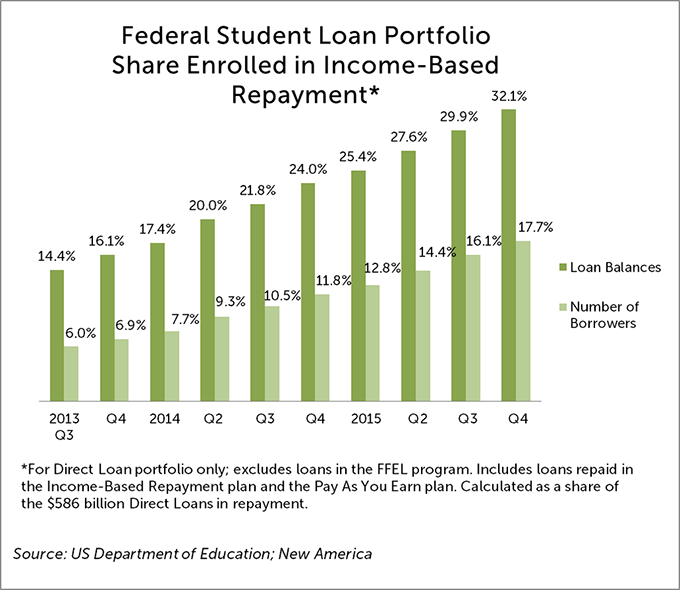 It seems still too few eligible borrowers know about the plan or understand how it helps them. But that gap is surely closing as enrollment swells. The program provides valuable insurance for borrowers who end up with lower-than-expected incomes and cannot afford their student loan payments. But the insurance has a big flaw. It isn’t automatic. Borrowers need to know it exists and then opt in after completing an annual paperwork exercise. More borrowers are now doing just that.

Of course the other side of that coin is as IBR enrollment grows, it shows that more and more student debt is held by borrowers whose incomes cannot support it. The Government Accountability Office reported a few months ago that the vast majority of borrowers enrolled in IBR were earning less than $20,000 (Adjusted Gross Income). Policymakers have to ask themselves, if college is a good investment, why are borrowers flocking to this insurance program? And why are those trends occurring while other economic indicators, like unemployment rates, are looking pretty good?

Maybe IBR enrollment is not a good proxy for borrowers falling on hard times — at least not since the Obama administration decided out of the blue in 2010 to increase the benefits in the program by more than 33 percent. Alexander Holt and I have shown how those changes, reducing the share of income borrowers pay and the length of time they pay before receiving loan forgiveness, change the program from what was a safety net in 2009 to a heavily subsidized loan program for even well-off borrowers if they borrow for graduate school. Borrowers may be enrolling in IBR because they know a good deal when they see one. And as word gets out, more and more students are likely to borrow larger sums to pursue graduate school because they plan to use IBR. That is especially true if they qualify for earlier loan forgiveness under the Public Service Loan Forgiveness benefit. No one plans to use insurance, so can we call IBR insurance?

Surprisingly that is exactly what the Obama administration says. IBR helps borrowers avoid default. Sure. Meanwhile student loan defaults have been rising gradually year after year. The same data that shows IBR enrollment growing shows defaults rose in the last two quarters and now stand at a record high. About 13 percent of outstanding loans are in default and 20 percent of borrowers are in default. 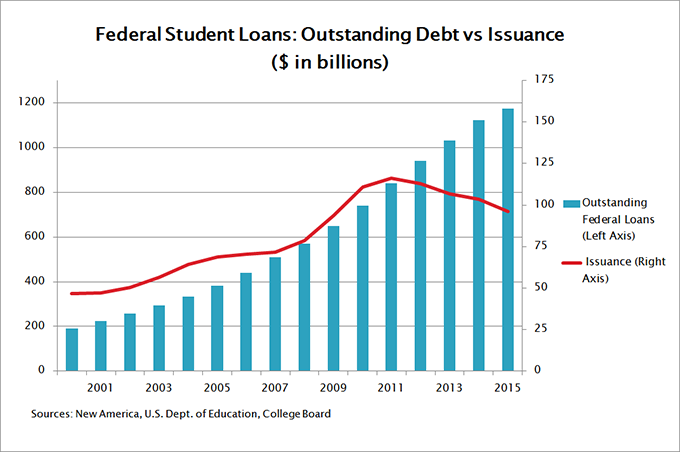 IBR enrollment is also surely contributing to another strange trend that does not bode well. The above chart reveals that outstanding federal loans are still growing, but borrowing rates are declining. Fewer students are borrowing and they are borrowing less. But the debt out there keeps getting bigger. A good deal of that is surely due to borrowers making payments in IBR that aren’t high enough to cover the accruing interest on their loans, increasing the odds that they will have a large balance forgiven.

Either these borrowers’ incomes are alarmingly low or IBR sets payments too low for a typical borrower to repay his student loan. Put that way, it is hard to get too excited about more borrowers using IBR.