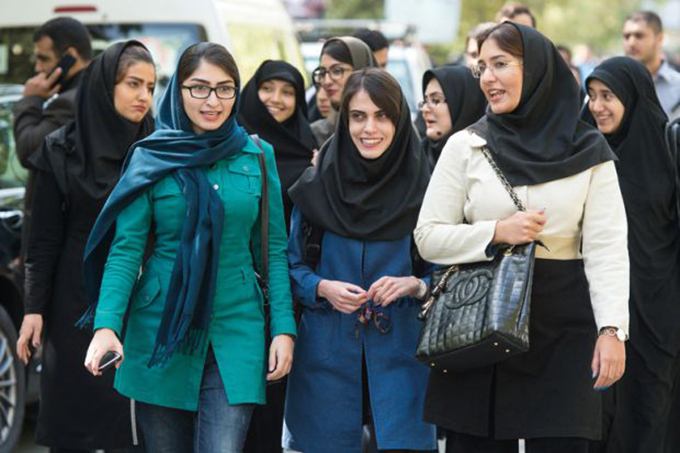 “Kids, we are leaving Iran,” said my dad in a calm but firm manner.

I was only 14 when my parents sat me and my two sisters down to break the news. We loved our country and couldn’t understand why my parents would make such a decision. But at that age “going places” was appealing, so I did not object. I thought we were coming back. We never did.

As Bahá’ís, my parents believed in the importance of education, especially for girls, since women are the primary educators of the next generation. My mum had tears in her eyes when she shared with us how her own education had been cut short in 1979 as she was in the process of writing her university exams.

The Islamic Revolution had begun after which every Bahá’í was expelled from university and further students were denied entry – a practice that continues to this day. My mother was the first generation of Bahá’ís denied access to education as a matter of state policy. My parents didn’t want my sisters and me to go through this too. It was a choice between their homeland and their daughters’ education. What emotional burden they must have endured, I’ll never know.

Years have passed since my parents made the decision to leave Iran. I am now 32 and as I write this piece, I reflect on how fortunate I am to have the opportunity and freedom to complete a PhD, which, as is the wish of my parents, can hopefully be a tool through which I can contribute to the betterment of society.

But this is not about me or my life story. It is about all those other Bahá’ís who are still in Iran and who are denied access to higher education every day. It is about those who have decided to remain in their homeland and reclaim their rights to access education, in the hope that they too will be able to contribute to the prosperity of the country they love.

As a 14-year-old, I was oblivious to all that was happening in Iran. It was only much later when I began to look at my past and my identity as a Bahá’í that I realised that the wholesale exclusion of the Bahá’ís within Article 13 of the Iranian Constitution left an entire community with no means of redress. I then learned of the “confidential” state policies, such as the 1991 Memorandum prepared at the request of Ali Khamenei, Iran’s Supreme Leader, instructing the government to deal with the Bahá’ís in such a way “that their progress and development are blocked”.

In the face of mass expulsion, the Bahá’í community developed a peaceful and creative response by creating the Bahá’í Institute for Higher Education, a private university staffed by academics expelled from state universities for their religious beliefs. The institute has been raided on numerous occasions and faculty and administrative staff have been imprisoned.

I recognise that by leaving Iran at 14, I was spared the disappointment and dismay that thousands of Bahá’í students face every year when they are denied enrolment into universities under the pretext of an “incomplete file”. It is hard to imagine the kind of feeling that Dorsa, a young Bahá’í woman studying architecture, got when she was summoned to the Information Office headquarters and given the following three choices to choose from: maintain her beliefs and be expelled from university, go abroad to continue her studies, or recant her beliefs and continue her studies. The authorities are fully aware that Bahá’ís, as a matter of principle, do not deny or lie about their religious affiliation.

The Bahá’í faith regards religion as a divine and progressive system of knowledge that provides spiritual and social teachings that enable humanity to advance. Bahá’ís recognise Bahá’u’lláh as the most recent “Divine Educator” – or manifestation of God – who has brought spiritual and social teachings required for this day and age. Bahá’u’lláh’s teachings on the equality of women and men, universal education and the absence of clergy challenge many of the beliefs and practices held in Iran today.

Access to education is a universal human right. Everyone, including Bahá’ís, are entitled to it under article 26 of the Universal Declaration of Human Rights. However, because for generations Bahá’ís have been barred and expelled from universities in Iran, many may have become desensitised to this discriminative reality and regard this human rights violation as the norm. We must ensure that the international community does not fall prey to tyranny’s false sense of comfort.

Author Bio: Shabnam Moinipour is studying for a PhD in human rights and media in Iran at the University of Westminster.