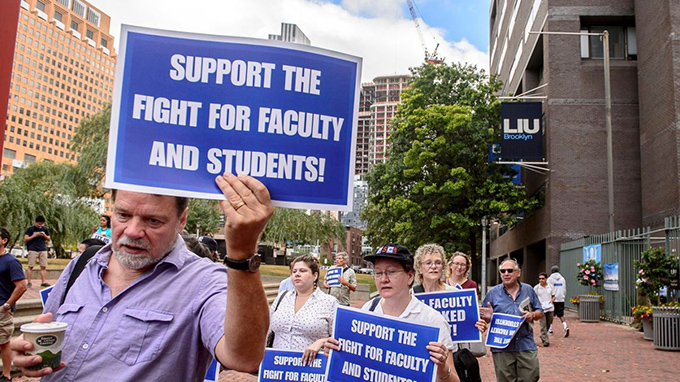 I’ve written a few times of one solution to the abuse of faculty in higher ed: unions. The main problem with unions is getting administration to allow them…unfortunately, sooner or later, administration realizes that unions cut into the money administration could keep for themselves. This leads to inevitable conflict, and admin rather holds all the cards.

So what happens when admin decides a union shouldn’t exist? Extermination, wholesale:

Long Island University’s Brooklyn campus, in contract fight with faculty union, tells 400 professors not to come to work and cuts them off from health insurance.
–yes, that includes “tenured” faculty.

It wasn’t just health insurance, LIU also killed the faculty’s e-mail accounts, making it difficult for them to communicate with each other (yes, there are other ways to communicate, but the union mailing lists and such were all through the campus server, of course).

Please understand, classes were to start the days of the lockout, so this was not done randomly. In the past, the union, as a show of solidarity, would cancel the first day of classes…but only the first day.

…printmaking professor Hilary Lorenz has not been able to ride her bicycle. It’s locked in her campus studio, to which she’s been denied access. Also held hostage in the studio are two of Lorenz’s own printing presses and a 20-year archive of her personal work.

Now, cancelling classes is a disruption, but for the students, “the first day” is easily the best day to have suddenly cancelled (and they received advance warning when the union did it, because faculty actually care about students). I won’t claim to know all the details, but I do understand that a union is only effective if the members act as a group, so I’ll let the union’s cancelling of a single day pass.

In a letter before the start of classes, LIU President Kimberly Cline assured students the lockout would have no effect on the beginning of the school year. But since the semester started last week, classes have been taught by replacement teachers. Many are scheduled to teach subjects for which they have no experience. In what the school later called an error, the university’s chief operating officer, formerly a professor of political science, was slated to teach yoga. The dean of students for the College of Liberal Arts and Sciences, a botanist by training, was tapped to teach ballet.

–honest, admin doesn’t care about education. Here’s a nice Doonesbury strip that sums up what it’s like to teach at most places.

On the other hand, removing 400 faculty members on the first day of class? This is a massive disruption. If LIU cared much about education, they’d have hired faculty in advance. If they cared even a tiny bit, they’d hire 400 new faculty members to come on to campus and slap together a course with essentially no notice. If they cared nothing about education, they’d toss anyone into the class.

Hmm, what will they do?

“They’re assigning administrators to teach art classes,” Barry says. “I think it’s fraud for the university to tell students that they’re going to get qualified experts as teachers and then not provide that.” Barry’s ceramics class is being taught by an administrator in the research grants department. The Administrative Assistant to the Dean of Pharmacy at LIU — who has a masters degree in International Policy Studies and no art background — is teaching drawing and painting. “One student said they went into class and the person [filling in] just read to them,” says Susan Ziegler, a locked-out adjunct art professor.

–yes, it is fraud, but admin doesn’t care. Neither does accreditation.

Admin had the whole summer to fire faculty and get replacements, and instead they decided to do it in the worst possible way for their students.

William A. Herbert, executive director of the National Center for the Study of Collective Bargaining in Higher Education and the Professions, said he could not think of an instance when a college or university had used a lockout against its faculty members.

—note his title, “executive director” is a sane length. He must not be a higher education administrator, then.

To obliterate the entire faculty in one swoop is a tremendous show of force by admin here. This is yet one more reason tenure should return to campus (and be honored, unlike at this place, which even removed the tenured faculty), so that at least a few faculty will remain behind to help clean up administrative messes like this.

The dispute, of course, is about money:

The main issue in the dispute, according to the Long Island University Faculty Federation, the union, is inequity between the pay levels of faculty members at the two main LIU campuses. Currently, half of Brooklyn faculty members are paid less — in many cases significantly less — than their counterparts at Post, says the union, which is affiliated with the American Federation of Teachers. The university is also proposing benefit cuts, the union says. The union also says that tuition rates are the same at both campuses, as are faculty qualifications.

Because there are no real overhead costs in public supported education, what you pay the faculty can vary wildly. Most of the money that used to go for faculty pay now goes to admin, and that appears to be what’s happening on one campus, but not the other. Asking for equal pay for equal work is hardly an unfair request, especially if both schools charge the same tuition.

LIU admin of course says it’s all about the students:

It’s hard to accept this excuse when admin just screwed over the students like this. It’s going to be pure chaos on that campus for at least a year, probably three years, and many faculty will be teaching courses that they know nothing about.

Gentle reader, imagine you just got hired at this school as faculty. How much are you going to trust admin not to screw you over when the time comes? Did anyone in administration think this through at all?

The statement also questioned how shared governance could exist after the administration “blocked access to the university and its website for half the membership” of the Senate, meaning “this governance body is rendered unable to function.”

In theory, there’s supposed to be “shared governance” on campus, but, bottom line, admin controls the money, and the golden rule (“He who holds the gold makes the rules”) applies. Faculty at this school got a hard lesson: there’s no shared governance, and there never has been.

It’s hysterical how admin insists they had the student’s needs at heart here:

The university released a statement Monday that said it was trying to protect students. “LIU’s first priority is our students,” the statement said. “We maintain an unwavering commitment to ensure that students continue their studies without interruption and that tuition remains affordable.

They fired everybody, just as classes started. There is no way the courses offered this semester will be comparable to the courses offered in prior years…these students are screwed, and admin made the choice to screw them. Admin is asking students to just trust them, promising to keep their tuition increases low but…that requires trust in administrative promises. How can you possibly trust them now?

I love news sites that allow comments, as so often there’s a commenter that knows far more than the reporter of the story. One is willing to provide some data to explain how admin is spending the money:

So, the administration that supposedly cares so much about students has greatly increased spending on sportsball….and cut funding for instruction and academic support.

Again: how can you trust an administration that does this?

I’m ambivalent towards unions because of their tendency towards violence. Will that eventually happen with LIU? If administration continues to act in such a reckless manner, I find it certain, unfortunately.

On September 15, the lockout ended, and the professors returned. Gee, can anyone guess what the mood is like on that campus? I know if I was admin at this place, I’d be polishing up the ol’ resume, because declaring war on the faculty just isn’t going to make for a pleasant environment. If I was faculty, I’d also be looking elsewhere.

If I was a student, I’d go anyplace but here…and admin shaped that decision. In a few years, when the school cuts most classes due to a sharp drop-off in enrollment, you can be sure faculty will pay the price.