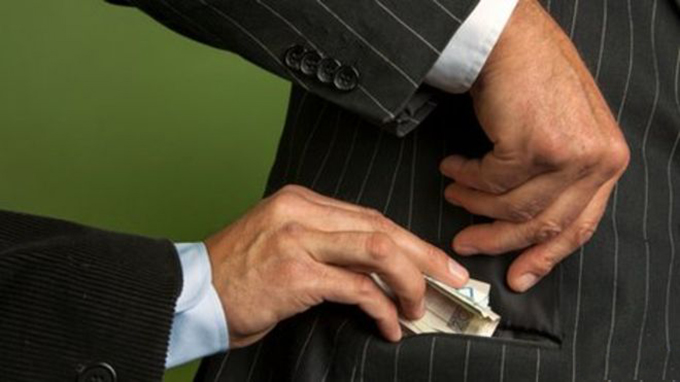 I’ve seen so many “leaders” in higher education plunder and loot their way to financial independence, and get away free, that it’s a surprise when one of them actually gets convicted for even a small part of his (or her) criminality.

New Jersey, among all the 50 states, is among the lowest when it comes to reputation for integrity. The Cartel is an excellent documentary detailing how New Jersey’s incredibly corrupt public education system is a disaster, despite spending more money on each child than any other state. Thus it is that I’m doubly surprised when a Poo Bah, and a New Jersey Poo Bah at that, actually goes to jail for his crimes:

Former Brookdale Community College president Peter F. Burnham has been paroled from the state Department of Corrections after serving two years of a five-year sentence for stealing about $44,000 from the college.

Burnham, 70, spent most of his time in a halfway house in Camden…

Compared to other documented examples of robbery in this blog, this is just chicken-feed, but the fascinating thing here is the sheer arrogance of this Poo Bah, and how even with the light of day shining directly on him, he yet feels the need to blow smoke. I promise the gentle reader, he is hardly unusual.

I have to be a little curious about this. You’d think a 70 year old wouldn’t have to maintain employment…surely his life of crime has paid off more than enough for retirement at 70?

His crimes were fairly petty, but revealing all the same:

He admitted using college credit cards between 2003 and 2011 to pay for expenses unrelated to his position with the college. The items, which totaled more than $24,000, included things such as meals, trips, groceries, personal items and even a Costco membership and a pair of cheap shoes from a factory outlet.

I’ve seen so many Poo Bahs get away with this sort of thing, I’m sure this guy was nailed on some sort of minor technicality. The prosecutor clearly thinks the Poo Bah was special, but honest, this description is just your run-of-the-mill Poo Bah:

In Burnham’s mind, he had grown beyond the role of college president, [prosecutor] Gramiccioni said. “He was the king, and everyone else were [sic] his subjects,” the acting prosecutor said at the sentencing.

The Poo Bah’s pay/compensation was also typical for our “leaders” in higher education:

“…the compensation Burnham was paid to oversee the community college: a $216,000 annual salary, which is $50,000 more than the governor’s annual salary; $1,500 a month toward his mortgage; a car and gasoline; up to $20,000 a year in tuition assistance for each of his two children; annual performance bonuses in the range of $10,000; a lavish travel and expense account; and an $11,000-a-year membership to the Navesink Country Club.”

–Brookdale has less than 15,000 customers, to give some idea how ridiculous the pay is…

Seriously, the crime was so petty compared to the loot the Poo Bah was raking in that it’s nuts. Heck, he covered most of his crimes in a funny way:

Before being sentenced for what Judge Thomas F. Scully called Burnham’s arrogant and contemptible conduct, Burnham asked for more than $36,000 in pay from the college for unused vacation days.

Scully agreed to use the vacation pay due to Burnham to reduce the amount of restitution he must pay the college from $44,497 to $7,941.

–what’s really disgusting about this is whenever I change schools, I get absolutely nothing for unused vacation/sick leave.

With the scene painted, now let’s look inside the mind of the Poo Bah involved. First, some crocodile tears from the man who spent 4 months in prison, and the rest in a halfway house:

“I was told I’d end up in a country-club prison,” he said. “I ended up in maximum security.”

He told fellow inmates he had a Ph.D., but most didn’t know what that was.

So, this mighty educator tries to bloviate about his education to prison inmates. That must have been a funny scene. Administrators are basically con men, especially at the Poo Bah level, and the man couldn’t help but ply his real trade as con artist in prison:

“They all thought I was a medical doctor, so they started to come to me with every ailment,” he said. “After a while, I gave in. I’d tell them to take two aspirins and if it persists, go see the nurse.”

–I was told by admin that dispensing even minimal medical advice was grounds for termination. Why do these guys play by such different rules?

This great educator can’t even get basic ideas across like what his education is, that there’s such a thing as “doctorate” that isn’t medical. We pay these people like they’re tremendously good at education, but in decades of work, I’ve never seen one demonstrate any ability, and this guy is typical. If he weren’t a Poo Bah, he’d be committed to an institution as sociopathic with extreme narcissism. Time and again I’ve seen Poo Bahs flee colleges in disgrace, only to turn up, like an Ebola-and-Zika-infested penny, somewhere else in short order. Despite his criminal conviction, this Poo Bah is convinced that’s he’s a great leader:

At the conference in Chicago, Burnham passed out business cards and said he wants to get a job in education, if he can.

“I’ll always have a scarlet letter. I’ll never be a college president,” he said.

Hey, at least he has a small grasp on reality (though truth be told, I’m not ruling out him being Poo Bah somewhere else)…but he’ll still try to get hired in higher education somewhere, assuming the men in white suits don’t finally track him down.

As always, the media fails to ask relevant questions, even though the man was available. The Poo Bah was interviewed at a conference where he gave a talk at the American Association of Community Colleges. There are questions here the media forgot to ask, but luckily someone in the commenter section asks them:

This guy got five years in a plea deal.  Probably guilty of a lot more. You have to wonder about the association that invited him to speak. Do they normally invite felons??

The gentle reader needs to understand that community colleges regularly violate Federal law, and do so with impunity. So, seeing as the members of this organization are primarily felons, having a felon as speaker seems reasonable.

And yes, it’s a safe bet this guy plea-bargained, and there’s no way to know what the “real” crime was that got him put away for years.

Part of the reason our community colleges are riddled with fraud and corruption, why the education there is all too often quite bogus, is the people running the schools are the same people running accreditation. The Poo Bah is no exception:

In addition to heading one of the state’s top two-year colleges for two decades, Burnham served as head of the state college president’s council and chaired the Middle States Commission, the powerful regional college accrediting agency.

Does anyone at all see a problem with having the guy running the school also run the “independent” organization that decides if the school is legitimate and is being legitimately run? There’s just no telling what kind of looting was going on with this Poo Bah fox guarding the henhouse. This is the sad state of higher education, and does much to explain why we have so many colossal ongoing frauds in this “industry.”

This massive conflict of interest is well known, and is as common as the plundering by the immensely arrogant leaders in higher education. Please, gentle readers, be very wary of setting foot on a community college campus, the places are incredibly corrupt and run by, as we can all see here, dangerously narcissistic sociopaths.