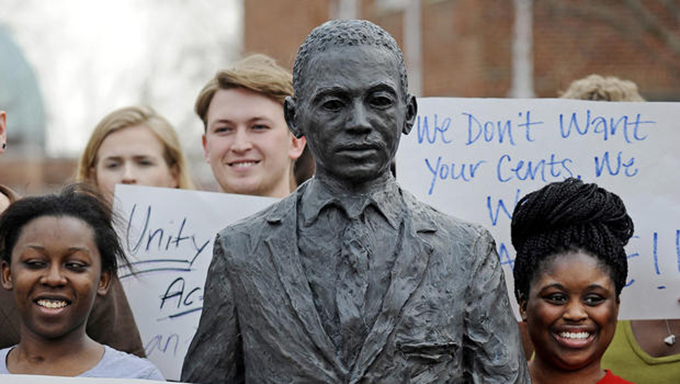 But some campuses in this region are part of another North-South rift that’s gotten less attention:

Southern states have been disproportionately cutting spending on public higher education, forcing tuition increases that make their colleges and universities among the least affordable for the poorest families — who already face some of the nation’s highest poverty rates — a slew of recent data show.

This contributes to falling enrollment in states already struggling with some of the nation’s lowest percentages of residents with college educations.

It’s “a vicious circle,” said Dave Spence, president of the Atlanta-based Southern Regional Education Board, or SREB. “You’ve got a region that’s poor. Why? Because it’s undereducated.” Yet budget cuts keep pushing university and college degrees out of the reach of many.

Three of five states that have most reduced their funding per public college and university student from 2008 to 2016  are southern, according to the Center on Budget and Policy Priorities, a Washington D.C.-based nonpartisan research institute. Louisiana led the way among these southern states with a 39 percent decrease, followed by South Carolina and Alabama.

Seven of the 20 states with the deepest cuts in higher-education spending are in the South, another report measuring funding decreases from 2010 to 2015 found. The State Higher Education Executive Officers Association, or SHEEO, said Louisiana, Mississippi, Tennessee, Kentucky, South Carolina, Alabama and Virginia each decreased spending on public colleges and universities by at least 10 percent.

That means most of the states with the highest cost of college for families earning less than $30,000 a year are now also in the South, according to a new report from the University of Pennsylvania’s Institute for Research on Higher Education. In many of those states, about a quarter of the population earns that much or less.

Four of the five states where a community college costs the most for the poorest students are southern: Louisiana, North Carolina, South Carolina, and Arkansas. Low-income families there would have to pay anywhere from 39 percent to 47 percent of their annual household incomes to pay for a two-year degree, the Penn study found.

And all five of the costliest four-year public university degrees for low-income families are in the South, the same study shows: South Carolina, Alabama, Mississippi, Georgia, and Arkansas, where the poorest students would have to spend from half to three-quarters of their incomes to attend college.

These trends affect more than the number and income level of people on southern campuses, said Melanie Barton, executive director of the independent, nonpartisan South Carolina Education Oversight Committee. They threaten the region’s economy, and portend a further entrenchment of poverty.

“I’m scared to death we won’t have students in the pipeline for jobs,” said Barton, especially in newer fields such as high-tech manufacturing and healthcare administration.

Five of the 10 states with the lowest percentages of people who have college and university degrees are in the South, the Lumina Foundation, which tracks this, says: Mississippi, Alabama, Arkansas, Tennessee, and South Carolina. (Lumina is among the funders of The Hechinger Report, which produced this story.)

Of the top 25 metropolitan areas with the highest percentages of people with degrees, only two — Atlanta and Charlotte — are southern.

Meanwhile, five of the 10 states with the biggest declines in university enrollment are in the South, according to SHEEO: West Virginia, Louisiana, Georgia, Alabama and North Carolina.

Barton said the low priority given by some governors and legislators to public higher education and the sort of associate’s degrees or certificates linked to newer jobs may be a throwback to a time when many workers in southern agriculture and manufacturing industries didn’t need one.

“It’s time to change the culture, and our cultural aspirations,” Barton said.

Other observers say the problem stems in part from a more recent emphasis in southern states on giving money to students with good grades who may not have financial need, to keep them from moving away.

This amounts to “spending on students that are going to college anyway,” said William Doyle, a professor of public policy and higher education at Peabody College of Vanderbilt University, who studies college affordability. “You’ve got a set of states that have spent a lot time and money on solving the wrong problems.”

King Alexander, president of Louisiana State, said the real issue is a shortage of state funding overall. Louisiana, like some other southern states, has suffered from declining oil revenues and political resistance to increasing taxes.

Those and other reasons have led Louisiana to slash higher-education spending by nearly 40 percent since 2008, with more cuts likely, forcing a doubling of tuition and warnings that the very existence of Louisiana State is at risk.

Funding for Kentucky’s public higher-education fell short this year by $26 million, resulting in a 6 percent increase in tuition and the layoffs of more than 500 faculty and staff; Gov. Matt Bevin, who has said taxpayers should support engineers but not humanities majors, has ordered another $18 million in cuts, over the heads of the legislature; a judge has held he had the right to do this, though the case has been appealed.

State funding in Georgia has also fallen, and tuition in the University of Georgia system has doubled since 2008.

States in other parts of the country also have reduced their higher-education spending, increased tuition, and seen enrollment drop. But not to the same degree as in the South.

Cuts like these also have a bigger impact here, where there are fewer alternatives to public higher education.

“The South has built its higher education system on the back of public education, unlike the Northeast, with its private colleges and universities,” Alexander said. “So it’s particularly damaging when appropriations are reduced, as has been the case in the last 10 years in the South.”

Because tuition has increased and financial aid has shifted to students based on reasons other than financial need, said Doyle, “They’re not helping first-generation, under-represented minority low-income students to attend college.”

That’s the exact population that is in abundance and growing in the South, where the number of Latinos in particular is among the fastest-growing in the nation.

In states such as Louisiana, Alexander said, if degrees in fields like health care remain out of reach for a large swath of the state’s population, those industries will be hobbled by the inability to find qualified employees, and contribute less state revenue, meaning still less money to support the public universities and colleges.

It’s another vicious circle, he says.

Spence said the South needs to be innovative in the way it tries to solve this problem.

“We’ve got to find a way to be more efficient, and help students increase post-secondary education without increasing costs — particularly since it appears that we’re not going to see an increase in appropriations,” Spence said.

But, he added, this is not a new imperative.

“I’ve said this once or twice a decade for the last three decades.”