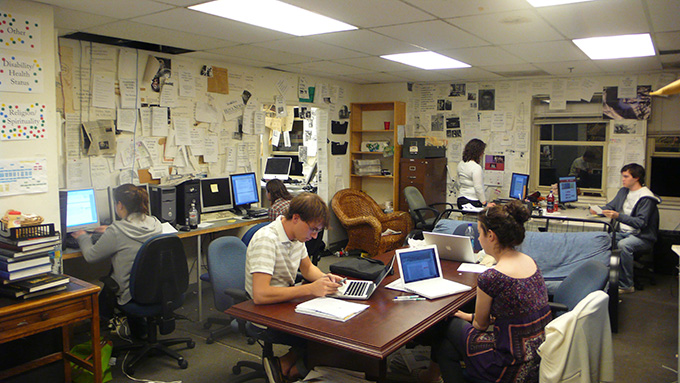 Campus newspapers face many of the same challenges confronting the professional media—inconsistent readership, dwindling financial resources, and competition with bloggers and social media. And when it comes to the involvement of administrators in editorial decisions, a movement now spreading across the country is pushing state legislatures to reaffirm the press freedoms of student journalists—particularly at public institutions.

“I think it’s a given that professional media have First Amendment rights,” says Kelley Callaway, president of the College Media Association and director of student media at Rice University in Houston. “It’s not always a given that college media have those same rights because they’re supported in numerous ways by their institutions.”

In April 2016, Maryland became the third state in the last two years to pass a “New Voices” law that protects journalists at public colleges and universities from being told what to cover—and what not to cover—by administrators. It should also protect campus newspaper advisers from retaliation, should a story be seen as too critical of the institution.

Though New Voices bills have failed in a few instances, campaigns have emerged in more than a dozen states. Only California specifically protects student journalists at private colleges and universities.

Administrators should keep in mind that campus media outlets provide the training grounds for the nation’s next generation of journalists, says Steven Listopad, the journalism professor who launched the New Voices movement while teaching at the University of Jamestown, a private institution in North Dakota.

Listopad’s students drafted the bill that became law in the state in 2015.

“We’ve taught upcoming students that journalism is for public relations and community-building—not for confronting serious issues,” he says. “A lot of students don’t know it’s OK to report on politics or criticize their schools.”

Administrators should look to campus journalists to help identify and solve problems, rather than worry about bad publicity, adds Conway. “If journalists haven’t ruffled some feathers during the year, they haven’t done their jobs,” she says. “They are not in opposition to the administration. They are simply a watchdog.”

And campus newspapers remain a valuable source of information. In fact, they are likely the only outlet providing regular, reliable coverage of an institution—or of higher education in general, says Frank D. LoMonte, executive director of Student Press Law Center, now the major force behind New Voices legislation.

“If campus communities are going to be well-informed, it will be because of the services of student journalists,” LoMonte says. “The health of these communities depends on the editorial independence of the student press.”

But campus newspapers may face even bigger hurdles as they abandon their printed versions, says Lucy A. Dalglish, dean of the Philip Merrill College of Journalism at the University of Maryland.

Her school’s journalists have complete freedom because their newspaper, The Diamondback, operates as an nonprofit that’s independent from the administration. Yet the publication may be harder to find than it used to be, Dalglish says.

“As student publications increasingly move online and are less visible, students don’t stumble upon them as much as they used to,” she says, recalling a time when the Diamondback’s bins were located at the entrance to most campus buildings.

The digital shift, she adds, requires more work than just creating a compelling website. “Unless you have a sophisticated social media strategy to push content out to the student body, you can quickly become irrelevant.”

States with laws protecting student journalists in their coverage at public colleges and universities*:

*California is only state to also protect students at private colleges.