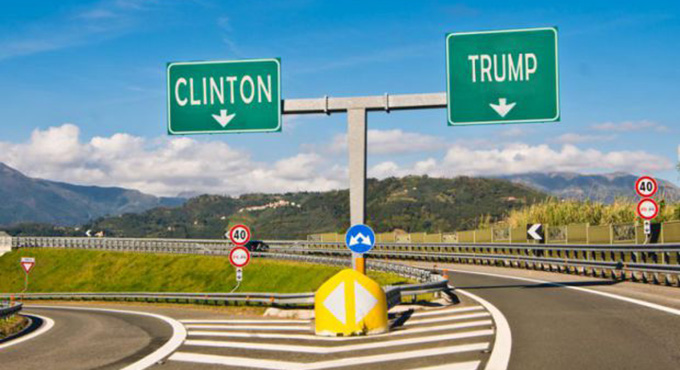 Last Wednesday night, I was trapped in my local movie theatre with an audience glued to the last of the US presidential debates. Two faces on a screen as tall as a multi-storey car park: no cutaways, no audience shots, no view of the moderator. Just the contenders, live on CNN.

“What’s going to happen tonight?” I asked my fellow professors in the photocopying room that morning. “It’s just going to be a bloodbath,” someone said. “How could it not be? I can’t face it,” someone else said, while another exclaimed: “It’s like a pile-up on the beltway: you have to slow down and stare at the carnage.”

People shook their heads sadly, as if we were discussing the demise of a beloved animal.

The day before, Donald Trump gave a speechcondemning the student loan crisis, saying that he endorsed income-based repayments. What does this mean? Impossible to say: there are too many imponderables and not enough specifics. But were he to proceed with plans to abolish the Federal Student Loans Program, it’s hard to see how anything else would repair the damage inflicted on the poor and underprivileged – the very group on whose support he depends.

My part of Virginia is Democrat, but Republicans are certainly in evidence, their ancestors having been the Confederate guerrillas who attacked Union supply lines during the American Civil War. Everyone knew, with the third and final debate, things were going to get messy, and my fellow voters came appropriately attired.

It was a mixed bunch: seniors, baby boomers, yuppies and bikers locked in the deprived environment of a darkened room, to be force-fed the growls, snarls and ruminations of a professional politician and a celebrity plutocrat. A group with baseball caps, wife-beaters and a six-pack of Budweisers hunkered down in the seats under the screen.

The doors opened at 8pm; everyone came hungry.

Some had large bags of barbecue-flavour potato chips; some chomped brazenly on blue corn nachos, guacamole dip flying in all directions; my Korean friend, Troy, wolfed down a handful of kimchi hotdogs, while my wife chomped her way through microwaved edamame. The woman in front of me snaffled down a mixture of pretzels, Frosties, snickerdoodles, chocolate ganache and a luminous pink dipping sauce. The aggregated chemical content might be lethal to small animals and anyone under the age of four, but everyone else should embrace it. It is a microcosm of the culture, nauseating yet morbidly compulsive, like an alien autopsy in 3D.

Toked up on sugar, Prozac and alcohol, the audience was overstimulated before the muck-raking began. The tandoori-flavoured popcorn passed like tracer fire over our heads long before Trump was dragged reluctantly on to the subject of bottom-pinching. When Hillary Clinton called him a “puppet” of the Russians there were whoops and catcalls, but there were also approving snarls when Trump claimed that the women who accused him of sexual assault had been put up to it.

That was the start of it.

Just after Trump said that he would keep the world “in suspense” rather than say he would accept the election result, I heard a number of people screaming, “Yeah! Yeah!” Two of the overweight guys in baseball caps had raised their voices, and the sharp sound of fist against flesh told us that someone had been struck.

“Fuck him, bitch!” yelled a woman immediately behind me. She was not addressing the groundlings but the image of Hillary, telling us that Donald had lost the Iowa caucus and the Wisconsin primary. Her fist punched the air, and all around me were people screaming “Yeah! Motherfucker!”, while Hillary told us that the “highest levels of the Kremlin” supported her opponent.

Down below, in an alternative universe, the scuffles were over and people were staggering out of the auditorium, some in tears. There was a pool of vomit on the floor and one woman was lying on her face. Ushers were helping people out, all elbows and knees, while the screaming continued. “Not in here, asshole,” someone shouted behind me.

People began to leave. There was the faint sound of sobbing, and an usher was mopping sick dolefully from the floor. We stayed till the bitter end, surrounded by those who wanted to see whether Hillary would decline the temptation of shaking her opponent’s hand.

The “final presidential debate of 2016” was the ramshackle conclusion to the best soap on reality TV, live and unscripted. But then, you couldn’t have scripted it. No one could.

Trumpery has made the campaign into a more obscene spectacle than anyone could have imagined. It has turned real life into a continuous Civil War re-enactment, a prolonged belch from the deep, disordered gut of the American id that now, released from confinement, threatens world domination. Heaven help us.