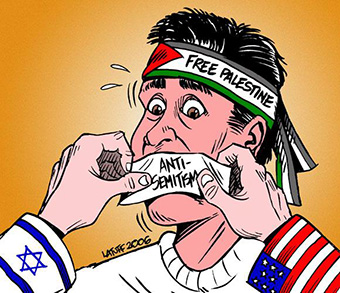 The culture of fear in higher education is quite remarkable. Publicly, we’re told we have freedom of speech and academic freedom, but the reality is quite clear that faculty are only free to talk about certain things, publicly or academically.

And so we come to the latest firing for a professor saying the wrong thing:

Oberlin College has dismissed Joy Karega, an assistant professor of rhetoric and composition, following an investigation into anti-Semitic and anti-Israel statements she made on social media

Weird, we’re so terrified right now of so many harsh words…but so unconcerned about rioters in the streets. It strikes me as irrational, but for the sake of argument, what horrible anti-Semitic things did she say?

“…her assertion that ISIS is really an arm of Israeli and U.S. intelligence agencies and that Israel was behind the Charlie Hebdo massacre in Paris…”

Huh. ISIS did get its weapons via the CIA, but I’m not here to defend her words.

I’m not saying I agree with her, but to use this as a reason for firing is…extreme. Yes, I know, the mainstream media insists that their narratives regarding the above are true, but, allow me to go back to that presidential election for a few moments.

There were many calls for Trump to just quit, because he was behind, you see. Heck, John Oliver spent a great deal of time on his show begging Trump to quit his “hopeless” quest to become president, even offering Trump a spot on his show if he would quit. Because Trump had no chance, you see. Have we ever seen a presidential candidate being begged to quit before, because his campaign was so hopeless? How can we be sure the people begging Trump to quit in such an unprecedented way didn’t know the truth of how the election would turn out?

“Trump has no chance of winning” was the media narrative, for months. And it was all lies. Nonstop lies, for months, on quite a few other Trump-related issues, I might mention.

But back to the point: if the mainstream media will literally pour a river of urine in our ears and insist it’s raining, it’s very fair to question everything it says about everything else going on in the world.

Some more of her “bad” words:

“Let some tell it, an attack on Zionism is an attack on Jews,” Karega wrote on Facebook last January, for example, after the attacks on Charlie Hebdo in Paris. “It’s anti-Semitic, so they say. Total nonsense. And I stopped letting folks bully me with that ‘You’re being anti-Semitic’ nonsense a long time ago.”

Much as many Americans are tired of being called RACIST for a far too wide range of words and actions, the “anti-Semitic” slur is also overused. It’s fair to consider the possibility that Zionism is not the same thing as Judaism…the words are different, after all.

Admin: “Yes, those are the same thing.”

Me: “The policy itself specifies that they are not the same, in the 2nd and 3rd paragraphs of page 1, and using the mean warps the entire purpose of these assessments. This is probably why almost every assessment here was ruled invalid. It wouldn’t take much to go back and do this the proper way. Can we please discuss this?”

Admin: “I’m not going to argue with you, and this conversation is over.”

–I did not lightly come to the conclusion that a Ph.D. in Administration is rubbish. I was actually punished for “non-collegially” questioning how admin was “interpreting policy.”

I know how difficult it is to teach administrators how different words have different meanings…I don’t think we should trust academic freedom to administrators who are reluctant to use a dictionary when needed. Too bad my opinions aren’t particularly relevant in how our institutions of higher education are run.

One line in the article is hysterical:

I’ve read this line three times, and I’ve laughed every time. It seems just a few weeks ago that polls asserting Trump would win were factually wrong. I had many people telling me my assertions about this had no basis in fact.

In theory, the line makes sense, but our world is so warped right now that I feel the need to paraphrase Stalin: In today’s world, those who know facts determine nothing, those who determine facts know everything.

Unfortunately in today’s world, facts are only by determined the people in power, and are echoed by the media.

Maybe her statements have no basis in fact…but shutting her up is not the way to determine what a “fact” is, any more than referring to the average American as a deplorable is going to win an election.

I repeat, I won’t go so far as to say I agree with anything she says, but I support her right to say things, to hold unpopular views.

Have we really forgotten how, just a few centuries ago, if you stood up and said “Black people are just as human as white people, and they should not be slaves,” you could easily get your house burned to the ground and cast out of “decent” society? That the expression “blacks should have the same rights as whites” would have no basis in fact? Honest, there were whole “scientific” fields justifying why it made sense for one class of human beings to be slaves (it’s why phrenology was so popular, after all, because it “proved the facts everyone knew to be true”).

I humbly submit that we have not yet reached the end of history…we still need to allow people to say unpopular things, no matter how much we don’t like to hear them.

Because the evidence is very strong that, sometimes, very unpopular is still very true.