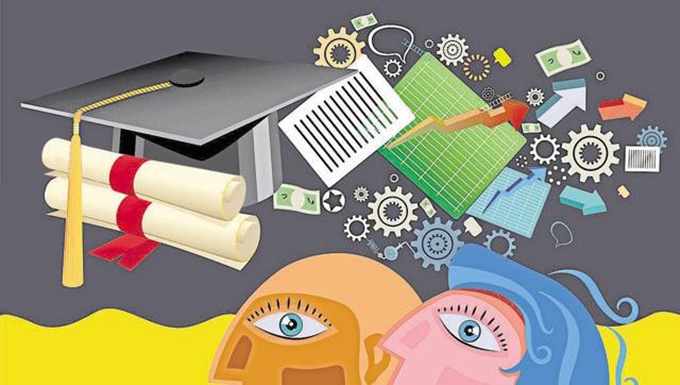 Admin: “You need to remove explicit functions from your algebra courses. Students have no use for that.”

It’s no great secret that a great number of our college graduates are basically unemployable, or no more employable than they when they graduated high school.

Admin: “You need to remove inverses from your algebra courses. Students have no use for that.”

Now, admittedly, higher education was never meant to be a jobs training program. A generation ago, a college degree, at least at the undergraduate level, signified the graduate had demonstrated knowledge in a wide range of basic topics. A college graduate who couldn’t add fractions, who didn’t know what century the American Civil War took place, who couldn’t compose a decent essay in English, who couldn’t speak at least a little of a foreign language, who didn’t know the basics of scientific principle, who was deficient in just one of the previous things, was considered very suspect.

Admin: “You need to remove logarithms from your algebra courses. Students have no use for that.”

And today, it’s quite common to see college graduates, with 4.0 GPAs no less, who cannot demonstrate even one of the previous…literally ignorant of every topic that was considered key to education a generation ago.

Admin: “You need to remove exponentials from your algebra courses. Students have no use for that.”

Admin: “You need to remove systems of equations in three variables from your algebra courses. Students have no use for that.”

There are many answers to that question, but today I want to focus on the most straightforward answer: administration. A powerful administrative caste took over education, and educators, scholars, no longer have say in what constitutes college material.

Admin: “You need to remove matrices from your algebra courses. Students have no use for that.”

–the more mathematically inclined reader might see a pattern to the removals, though there was nothing I could do to explain to admin what they were doing…they know nothing of the subjects they’re telling me how to address.

Educators are deeply disenfranchised from higher education today; admin, often with no education themselves, now get to control education. Primarily, this control is used to subtract from what education used to be, although often they’re just content to add to their own power.

For the most part, professorial “influence” on campus is a sham, an illusion that we have anything to do with what goes on now. Sometimes admin doesn’t bother with the illusion:

So admin at Concord U decided to dispense with the formality, and just rip away more content from the General Education requirements. The professors complained, accomplishing nothing, of course:

“They say that the administration tried to make the changes without any faculty review, and that when the faculty were permitted to review proposed changes, professors’ views were ignored. The university’s board chair said the board backs the administration.

The faculty voted 52-22 that they have no confidence in Vice President Peter Viscusi. Although the vote has no actual power,…”

The faculty say they do not like this method of doing things, and board responds with casual disrespect:

“Elliott Hicks, chairman of the school’s board of governors, said the vote hasn’t changed his or other board members’ support for Viscusi and that the board doesn’t plan to make any changes to his employment.”

The changes are pretty big, and the scholars who know about education have legitimate concerns, concerns that are, ultimately, irrelevant:

“Faculty members, including some who wished not to be named for fear of retaliation from the school’s administration, identified several concerns with Viscusi. Chief among them were the changes to the school’s general education requirements. The new requirements reduce the number of general credits required of all students to graduate by about 20 percent.”

–what, the faculty don’t want to be named because they fear retaliation? But, but, administrators are so reasonable…

Isn’t that fascinating? Admin can just take out 20% of what a degree entails, and there’s nothing to stop them. Tuition won’t be reduced 20%, of course. What is the reason for the heavy debasement of education at Concord U? What will the money that used to go towards teaching these courses go to?

In addition to changing the school’s general education requirements, the school’s board of governors voted this week to restructure the university in part. The new structure creates four new positions for deans, positions that didn’t exist before.

Ah, great, the reduction in classes will allow the hiring of more deans…how much more of this can we take? Our campuses are drowning in administrators while our graduates are drowning in debt. Does nobody suspect these two things are related somehow?

One comment really highlights the enormity of the issue here:

It’s interesting to see an administrator seize control of the curriculum in order to make an institution “to help save the school money and allow it to better compete with other schools…” by taking it out of the business of educating in order to be “competitive.”

Our higher education system is so overbuilt, so open to anyone who wants to take out a student loan, that all our campuses are now in competition with each other to offer the easiest, most convenient degree. Our “leaders” use the debasement of coursework to justify further debasement, to stay “competitive” with other schools for that sweet, sweet, student loan check.

Throughout this post, I’ve included many missives from admin, debasing our introductory math course ever further—a course necessary for students to progress to actually college level coursework. When I complained to admin that removing so much material from our algebra courses would make the courses unsuitable to prepare students for further work, they replied: “Other schools are doing the same to their algebra course, so we are justified for doing it here.”

And there was, of course, nothing I could do. We are now at the state where higher education’s failure to educate is being used as justification to fail even more extravagantly. How many more states are left before higher education can only move to the state of collapse?