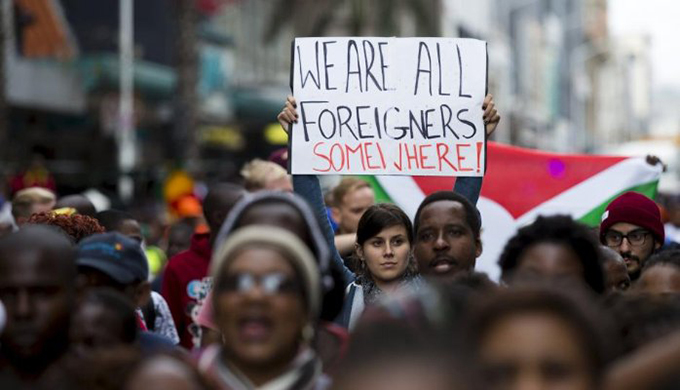 Yesterday, Ferentz Lafargue wrote an op-ed for The Washington Post, arguing that student objection to bringing speakers with offensive views to campus is a sign of strength. In the piece, Lafargue makes several points with which I concur:

To be sure, Lafargue offers a thoughtful response to a complicated issue. However, there is a sense in which I find his argument facile. Indeed, as he observes, “the real culprits—on campuses and in the real world—are the persistent effects of homophobia, income inequality, misogyny, poverty, racism, sexism, white supremacy, and xenophobia.” But fighting these culprits involves more than just keeping people who offend students out of the spaces that they want to feel safe within. We can challenge viewpoints with which we vehemently disagree in a number of ways that do not require the cancellation of speakers. To be effective, we have to raise the bar and empower ourselves to create change in the real world by probing vexed issues of race and gender, pushing ourselves to clarify and communicate how we think about controversy.

Where do we draw the line on what should and should not be said on college campuses?

Given that John Derbyshire was disinvited from an event at Williams because he holds racist views, what would we do if there happened to be a student or professor on campus who agreed with something Derbyshire wrote in his controversial article, “The Talk”? Would that professor be censored, fired, or given a pass?

Would that student be suspended, ostracized, or would we push for the creation of speech codes that criminalize hate speech? How do we even define hate speech?

These are just some of the many questions that need to be considered if we want to create social change.

Lafargue posits that by pushing for Derbyshire’s disinvitation, students are learning a crucial skill: how to fight discrimination. But that logic doesn’t apply to dealing with discrimination everywhere.

Sure, we can disinvite speakers from Williams. But in the workplace, can we disinvite our bosses and co-workers from meetings if they offend us? In that situation, we could either quit working for that employer and walk out of the meeting, or we could stand up for ourselves and communicate our concerns, clarifying what we find offensive and why.

True enough, everyone doesn’t enjoy arguing about political issues, let alone arguing with someone who offends them. Every student should not be expected to want to argue with a racist speaker. And everyone need not respond to controversy in the same way.

For me, the issue arises not only when students interested in this form of uncomfortable learning are denied the opportunity to hear from someone like Derbyshire, but also when educators and administrators come up with reasons for why students should not have to deal with having someone like Derbyshire on campus for all of two and a half hours. As Lafargue perceptively notes, some college students face various personal, familial, and financial challenges that make their time on campus more difficult than that of others.

I am one of those students.

I’ve faced familial and financial challenges and many of the obstacles I’ve had to overcome in life have made me a stronger person. The last thing I want is for someone to think that because I have experienced significant hardships, I need to be protected from organized engagement with a purveyor of the “real culprits.” Educators and administrators should have more faith in students’ ability to deal with controversy responsibly, without resorting to cancellation. Williams students are at Williams, in part, because we can confront the prevalence of real culprits on campus and in our world.

Whether or not students would attend the event and discuss it afterwards, peaceably protest the event without disrupting it, or simply ignore it altogether is a matter of individual agency for all, and individual non-conformity for some. The problem is not coddled students. The problem is how some colleges have dealt with issues of inclusivity, discrimination, and free debate on their campuses thus far. The best way to deal with controversy is not to avoid it at all costs and make it go away as soon as possible when it arises.

If educators and administrators want to empower students to be agents for change in the real world, they should discourage banning speakers with offensive views and encourage students to exercise their own agency by dealing with controversies on campus as they see fit.