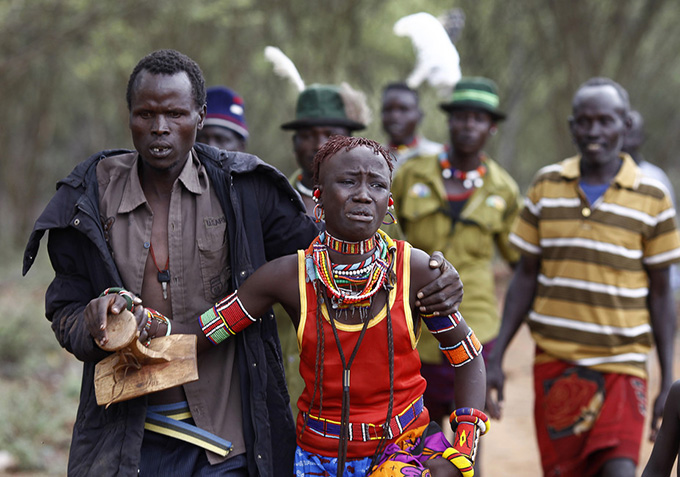 Millions of African girls are becoming wives every year. In Niger, about 75% of girls will become child brides before they turn 18. In Chad and the Central African Republic the figure is 68%.

Some countries, like Ethiopia, are recording some important victories in the fight to protect girls from becoming child brides. But the practice remains alarmingly common and is growing. In a 2013 report on the issue, the United Nations Children Emergency Fund warned that:

If there is no reduction in the practice of child marriage, up to 280 million girls alive today are at risk of becoming brides by the time they turn 18. Due to population growth, this number will approach 320 million by 2050.

The same report says that population growth rates will cancel out any of the gains currently being made in reducing child marriages.

How can child marriages be stopped? The answer, research suggests, lies in improving girls’ access to basic education – and in changing school curricula so that both girls and boys realise women can contribute a great deal to their societies if they are not just married off and forgotten.

Proven links between education and empowerment

Countries in sub-Saharan Africa have some of the world’s lowest levels of school enrolment and completion. The situation is particularly dire for girls – they account for 55% of the region’s children who aren’t at school, and 52% of its out-of-school adolescents. A study by the World Bank that explored the links between child marriage and education found that child marriage and underage pregnancies collectively contribute to between 15% and 20% of school drop-outs in the region.

Other research has suggested that any girl who completes ten years of education is six times less likely to be pushed into marriage before she turns 18 than a less-educated peer. Early enrolment has also proved to be key – the younger a girl is when she starts school, the greater her chances are of not becoming a child bride.

So what is it about education that can make such a difference to a girl’s prospects of becoming a child bride? Quite simply, education is a dynamic tool for change. It has the power to transform individuals’ lives and improve their social standing. It also empowers girls to understand and claim their rights – particularly in the areas of further education and their own reproductive health. At its best, education will equip girls to choose and create their own futures rather than those imposed by their families and communities.

Educating girls also has a hugely positive impact on their communities. It can lower maternal mortality, improve children’s health, lower birth rates and help women to find jobs – which in turn boosts economies.

There are two reasons that education in many parts of Africa is not changing girls’ lives. The first relates to access; the second to curriculum content.

Many girls don’t receive the family support they need to start, stick with or complete their education. This is partly because girls are simply not valued in the same way as boys. Traditional gender norms in many African societies mean that parents view their daughters as little more than a drain on limited family resources. They do not invest money in a daughter’s education and skills acquisition, preferring to marry her off at an early age. These marriages produce dowries and reduce the perceived “burden” on a girl’s family.

Even if a girl does go to school and is supported by her family, she may find the curriculum itself problematic. Far too many classroom examples, storybooks and texts describe a society in which boys and men are bright, curious, brave, inventive and powerful – while girls and women are silent, passive and invisible. Girls are presented as being little more than “marriage material” and their education focuses on turning them into good wives. This inevitably reinforces the perception that a “good marriage” is the most important way to promote and secure a girl’s well-being in society.

There has been some good news about child marriage rates from Ethiopia, Niger and Mozambique. A civil society organisation in Ethiopia successfully increased girls’ school attendance rates and delayed marriages by giving a sheep or cow to parents who promised not to marry off their daughters. Ethiopia has done well by reaching out to community leaders to explain the value of educating and empowering girls.

There are some other avenues that could be explored. For instance, the people (most of them women) who run girls’ education campaigns should be supported with leadership and technical training. Families should be taught about the option of flexible schooling, which allows girls to work and earn money while not dropping out of the school system entirely.

Such campaigns also shouldn’t ignore girls who are already married. They could teach girls, their husbands and their husbands’ families about alternative, non-formal education models – such as the flexible schooling structures I’ve described above.

In addition, African governments need to adopt and enforce both legal and social protection mechanisms that focus on girls’ education. Some legislation already exists, but it’s time for it to be applied. For instance, governments must engage with article 10(3) of the African Union Charter’s protocol on women’s rights to ensure that they make enough money available specifically for educating girls.

Author Bio:Michael Addaney is an Assistant researcher at the Quality Assurance and Planning Unit at the University of Energy and Natural Resources