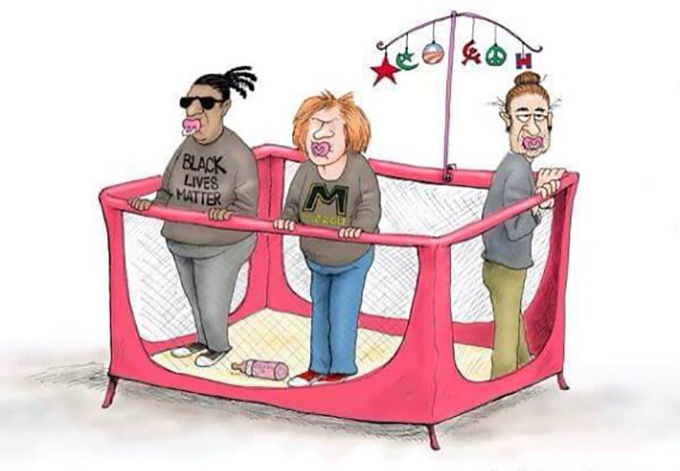 –classic complaints from a hippie teenager.

Every culture of worker has its own slang, and today I’ll talk about a word that readers outside of higher education might not know, “snowflake.”

A snowflake is a special student. I don’t mean “special ed” or as we call it nowadays, “special needs.” A snowflake in higher education is a student that just needs special attention.

“Can I have an extra 10 minutes to take this quiz?”

Now, snowflakes have always been around. In the past, it was usually just a student that tended to inject irrelevant (but perhaps funny) comments in class, or noisily shift his desk multiple times during a lecture.

Me, starting class: “So, whose burger and fries is this?

Snowflake strolling in, shake in hand: “Mine, I had to go to the bathroom.”

–honest, that smell is a bit of a distraction during class. Snowflakes don’t care how their needs affect others.

Snowflakes have definitely multiplied over the years. Instead of one snowflake a semester, or one snowflake a class, I now have a score or more of students each requiring something special for every assignment.

I sometimes wonder about these snowflakes when they leave the safe spaces of our campus. How do they make a life for themselves, always asking for special bonuses, bonuses they’ve never earned? Often when I see student protests, all I see are snowflakes, holding signs and angrily asking for moar.

It’s those protests that are worrisome, with whole banks of snowflakes screaming in pain from offenses nobody can glean. Snowflakes are starting to snowball, and then appeal for more special needs from admin. Why is this happening now?

I’m hardly the only to notice the blizzard of snowflakes on campus nowadays, but rather than be mystified, the professor linked above is trying to make sense of it.

Let’s see what he has to say:

Schwartz…said the term [snowflake] stems from what he calls “the rise of the pristine self.”

Schwartz writes in the book that “this is a self that is touched by nothing but love. The problem is that nobody is touched by nothing but love, and so if a person has this as an expectation, if they have built their sense of themselves around this premise, the inevitable appearance of the something other than love blows this structure apart.”
I’m not so convinced at this. Granted, it’s been years since I went to public school, but I found endless hostility and hate in such places…the bullying was remarkable. Are they really idyllic love-fests now? I have my doubts, but perhaps I’m simply ignorant of what our public schools are like these days.

“the oversensitivity of individuals today, including political correctness and microaggressions, all stem from this idea that people operating under the notion of the pristine self view you as evil because you are showing them something other than love.”

Now, this I can agree with, as I’ve certainly had my share of students turning very hostile, very quickly, once it becomes clear that I do have some actual rules that need to be followed, even for snowflakes. It’s striking how quickly they can turn…and how quickly they escalate. Within minutes of my treating my students like adults, I get calls from admin, because the snowflakes know to appeal to admin when they don’t get what they want.

Schwartz points to the rise of helicopter parents and capitulating campus administrations as contributing to this phenomenon.

Again, my own eyes agree with the professor’s words. How many riots and altercations at our campuses could have been prevented if admin had shown a little spine far earlier? One can only guess, but I bet if admin were more concerned about education than growth (such as would happen if admin were drawn from the educators instead of a mercenary class), there’d be far fewer climbing walls and safe spaces on campus, and possibly a few more study sessions.

Ultimately, the professor blames the rise of the snowflake on political correctness:

“…there is clearly an element of irrationality in political correctness. It is a form of censorship without a censor; we impose it on ourselves. Yet, it keeps us away from the reasoned discussion of social issues which everybody can see are important, consequential, and desperately in need of wide-ranging analysis. It does so through an emotional power that is rarely gainsaid and which anyone can see is ultimately against everyone’s interest.”

The professor is offering his book for free if you’re willing to jump through a few hoops to get it. While understanding the origin of the snowflake is of merit, I think it’s more important how to be rid of them. Real snowflakes are easily dispelled with heat, and a similar application of heat needs to be applied here, namely, by doing some very simple things:

Would these changes get rid of all the snowflakes? Of course not, but it would thin their numbers down to a mere dusting, to the point that professors wouldn’t have an extra “snowflake” class every semester, just to deal with all the special cases and special needs and special things this “special” caste of students now requires.