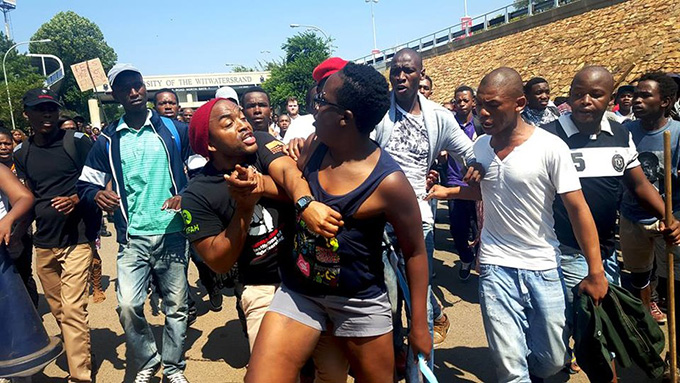 It was a shocking series of images: a young woman – Thenjiwe Mswane – being violently handled by a group of young men. Mswane was part of a largely feminist and lesbian, gay, bisexual, transgender, intersexed, queer and asexual (LGBTIQA+) student group. They had gathered at Johannesburg’s University of the Witwatersrand to protest against the exclusion and marginalisation of groups and members of the #FeesMustFall movement from a recent campaign. She was attacked by other members of the #FeesMustFall movement after she’d confronted them with her group’s concerns.

In 2015 South Africa’s student movement was an impressive force. But cracks are appearing along party political, ideological and class lines. More recently the question of gender, and the equality of LGBTIQA+ individuals, have come to the fore.

A strident fringe at universities, with limited but vocal support off campuses, asserts that addressing the equality of women and the marginalisation of LGBTIQA+ people is a “distraction” from the unity of black struggle and that it must wait until after some mythical revolution. Others, also enjoying some support in wider society, insist that the equality of women and LGBTIQA+ people must be part of any genuinely radical action.

The term patriarchy has become an everyday point of reference in these discussions.

The system of patriarchy

Patriarchy is a social system in which authority and power is primarily held by men and in support of men. Men dominate in the political, economic and religious spheres, as well as in the family. Women and children are understood to be under the authority of their fathers, brothers, husbands and even sons.

Patriarchy is always present. It is also the matrix through which political contestation is organised. But as South African feminist thinkers like Nomboniso Gasa, Pumla Gqola, Mmatshilo Motsei, Raymond Suttner and, more recently, Fezokuhle Mthonti have argued, it took on a particularly explicit and virulent dimension with Jacob Zuma’s rape trial in 2005 and 2006. Zuma, who is today the country’s president, was found innocent.

This form of patriarchy continued with Zuma’s struggle for the presidency of the governing African National Congress (ANC). He was elected to the position in 2007 and became the country’s president two years later.

Masculinist forms of politics have a longer history both in and outside of the ANC. The authority of charismatic men) has often substituted for democratic organisation.

It is vital that any democratic project, as well as any radical project, take patriarchy with all seriousness. The post-colony is littered with instances where women, sometimes allowed to take up new authority and power in the course of struggles, are quickly sent “back to their place” once the struggle is won.

In many post-colonial societies there is a toxic alliance between extreme forms of capitalism and nationalist patriarchy, which is often violent. India is a notable example of this.

There are two real dangers that arise when patriarchy is discussed. The first is that men, sometimes with female supporters, act – often in a very authoritarian manner – to silence any discussion of patriarchy, especially within struggles. This is what was worryingly witnessed at Wits University. It is what we frequently see in the discourse of someone like commentator Andile Mngxitama who, as feminist academic Pumla Gqola has noted in her recent book Rape: a South African Nightmare, has a position on the rape of black women that appears to be deeply complicit with colonial ideas.

The other danger is that all black men, or all working class or poor black men, are presented as if they are automatically patriarchal or even potential abusers and rapists. This set of assumptions, which is also complicit with colonial ideas, has often been present in certain forms of white feminism.

There are men of all classes who resist the seduction of patriarchy, who are not abusers and who stand up against abuse. There are many young women at university today because of the love, support and sacrifices of their poor and working classes fathers.

But in times of social crisis millions of men are not able to access respect and power. During these times there is a great danger of demagogic forms of populism that offer dispossessed men illusions of personal power and authority. This happened in Europe in the 1930s and it has happened more recently with the rise of fascist politics in India.

The emergence of populism

South Africa today is sinking into a serious economic crisis. Established political leaders have lost their moral standing. The situation is ripe for the emergence of forms of demagogic populism, especially the nationalist version of populism. This offers men within a patriarchal society, but without access to social power a sense of respect – respect gained at the expense of women.

It is vital that South Africans build social movements and political organisations that can struggle for an inclusive and just society. These movements and organisations need to be broad based and to be rooted in the majority of the country’s people who are poor and working class.

But at the same time it is equally vital that from the outset all democratic and radical politics takes the position that the equality of women and LGBTIQA+ people is a starting point for all progressive politics. This is a principle that can never been sacrificed on the altar of any expediency, real or imagined.