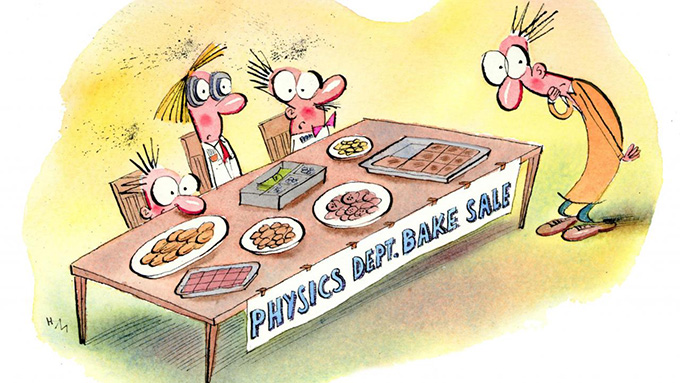 Throughout higher education, academics are realizing something is horribly wrong. We’ve seen the old campuses grow, and new campuses spring up, but we are told there just aren’t any permanent positions available. Faculty, if they want to be in higher education, are forced to be overworked at starvation wages, in the hope that someday all the education they’ve indebted themselves for will result in a “real” job.

We see the new buildings being constructed, we see the parking lots filling up with university workers and students…but there still there are no new positions for teachers and researchers at the university.

Over and over again, adjuncts bitterly noted the swelling ranks of well-paid administrators in their universities, even as the people who actually do the bulk of the teaching remain poor.

Look, this isn’t some weird conspiracy theory. Anyone that works in higher education can tell you what’s happening, anyone who looks at employment records can see it, and anyone who simply walks through campus can observe how much of the campus is for administration now.

“I would love to see instructor pay increase and to eliminate the exorbitant pay that many university presidents and administrators are receiving, but I just don’t see this happening.”

It’s positively nuts how many administrators even a tiny institution can have, and utterly bonkers what they’re paid, for work that, even after years of trying to determine (kowtowing in a most humiliating way to get as close as I could), I never could glean. It was very clear at my previous school that admin firmly believed the whole point of the school was to support administration. Even tiny suggestions on my part not to screw over and hurt ignorant students was greeted with pure contempt…every dollar taken out of kid’s pocket was another dollar for admin, after all.

My experience has been crushing penury. A little-discussed financial issue is that I, nor any other adjunct, can afford the expense of multiple commutes to far-flung campuses.

Professors (on tenure track as well as tenured) where I’ve worked have all, to a person, been in support of adjunct salary increases. Faculty’s stripping of effective power to sit on budget committees (as well as other vital committees) has been, in my experience, the greatest source of anger among faculty.

Faculty are impotent on campus today. The only reason we have tenured faculty is the rules for tenure date to a time when faculty and administrators were the same people. Administration has been hacking away at tenure, as well as every single form of job protection and respect, every year.

Now, I understand how the market works, but we’re told by admin over and over again with every new change in higher education, that the change is made “to help students.”

So, admin tells us that turning all the teachers into adjuncts isn’t hurting the students at all. This is, of course, a lie:

These studies confirm numerous other reports…

The studies referenced above are hardly news, and only reflect common sense. How can you possibly motivate a student to study and achieve academically when the professor, the master of the academic subject being taught, is treated like chattel? Instead of showing our incoming students one can succeed through study, great swaths of first year courses are taught by a cohort of minimally paid adjuncts, along with grad students who often move in the adjunct position soon after graduation. It’s obvious on the face of it that the students, the smarter ones at least, will realize staying in school is a horrid mistake.

A few faculty members, realizing that the protections of tenure are all that keep them from starvation now, are trying to do something about this. Unfortunately, they’re trying to accomplish change through legislation. The campaign is called FACE, Faculty and College Excellence, but it’s getting roughly nowhere. Oh, the bills get written, and some versions get passed, but there’s a trend:

“…the protections for part-time faculty were, in fact, stripped from the bill.”

You just can’t legislate morality, particularly in a system that is demonstrably run by the immoral…and these immoral often have close ties to the legislators (who themselves hardly have a stellar reputation in this regard).

The bottom line is the adjunctification of higher education has far more to do with lining the pockets of the bloated administrative class than any other reason. Adjuncts, seeing reason and decency will not help them and will not help the students, have started taking things in their own hands:

In recent years faculty serving contingently have frequently chosen to form units of their own, where state law permits. This choice reflects the growth in full-time contingent appointments, as well as the reality of academic hierarchy and, especially, broader trends in collective bargaining.

–“where state law permits.” Hmm, asking government for permission to assemble…that’s the kind of thing that should be in the Constitu…oh, wait, nevermind.

Unions’ tendency towards violence make me a reluctant advocate for them, but the Poo Bahs that run higher education are going to keep plundering it, exploiting the students and the workers, until there is no money left…or until they have no choice but to change their ways. Unions represent the last, best, hope, for decent treatment of academics in higher education, particularly the grotesquely mistreated adjunct professors.

Will unions work, or will Joker Education scabs simply fill the gap when the adjuncts walk out in masse? I don’t know, but I do know the current system isn’t working for the students, and isn’t working for the scholars…considering these two groups form the entire legitimate existence of higher education, it’s clear things have to change soon.

Assuming the adjunctification trend continues and the higher education bubble doesn’t simply pop, we will someday have campuses with no faculty, not even classrooms. Just endless anthills filled with administrators, and basements filled with computer servers…while off campus “coaches” do what little is needed for online coursework, before going back on the street to beg for food.