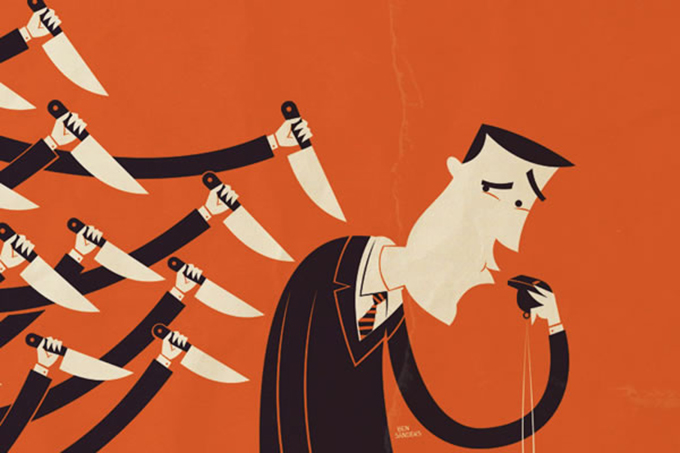 In Ye Olden Days of Higher Education, college was about classes during the week and partying on the weekends. You didn’t even party every weekend, since sometimes you had papers and tests, and you certainly didn’t party final exam weekend.

That’s pretty much gone. Administration moved in, and the Student As Customer paradigm changed that.

Now faculty are wary of giving tests on Fridays (because many students are too drunk from Thursday night partying, in preparation for the weekend partying) or even Mondays (too many students too exhausted from partying all weekend). Assigning papers has fallen off sharply, as studies have shown—many students make it through their whole degree program never having to read or write more than a dozen or so pages a semester.

College being a “4 year party” caused many students to flow onto campus, and their money poured into administrative pockets, increasing their power. Unfortunately, many administrators are “Progressive” and saw fit to use their newfound power for Social Justice concerns. Education became irrelevant, and “leadership,” whatever that means, became the goal of Education.

First came warped hiring practices, where hiring was ever more based around skin color and genitals. As more Deanlings were hired based on questionable reasons, administrative power became even stronger—the questionable hires were loyal, since they had nothing else to offer but loyalty.

This power then turned on the faculty. Faculty were steadily stripped of power, and a culture of fear evolved on campus. Faculty are dead meat on campus, but administrative lust for power is not satiated.

Now administrators are turning their baleful gaze toward students. It will, of course, start with the weakest and most vulnerable of the students. That means those not loyal to the Social Justice cause, and daring to speak out about it.

“Black Lives Matter is trash because they do not really care about black lives. They simply care about making money and disrupting events for dead people.”

The kid has an opinion, he posted it. Back when higher education was about education, someone having outspoken political views was hardly unusual (cf “the 60s”). Back then there wasn’t a horde of ridiculously overpaid administrators with absolutely nothing to do. And, of course, there weren’t demented Social Justice Warriors around back then either.

So, instead of simply ignoring what some guy said, Admin now steps in with a letter: 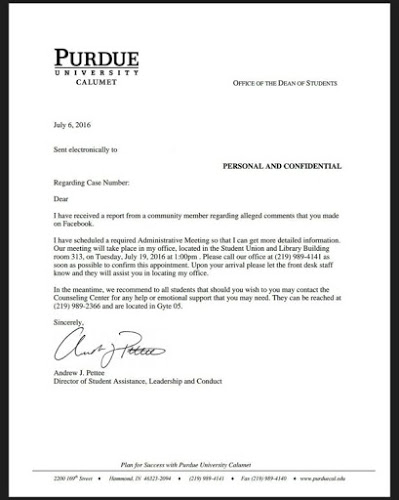 Consider the arrogance and expense here. Considering just how much money administrators and support staff are paid, typing up and sending out this letter probably cost $1,000 or more of administrative time.

This overinflated Deanling doesn’t even ask the student to make an appointment, instead demanding this student show up at a particular time and place. The arrogance here is amazing. Can you imagine having a stranger demanding to meet you at a particular time and place? I grant convicts get this kind of treatment…is that really the status of students that don’t comply with the Social Justice narrative now? It was then summarily moved to a later date.

Administrators at Purdue University Northwest have demanded a meeting with a student who made controversial statements on social media—and even threatened to expel him.

With administration putting blood in the water, the student became a target, and the SJW students closed in:

In addition to the reaction from Purdue, Nash found himself the target of multiple online threats from fellow students, some of whom he says called him a “dirt racist conservative scumbbag [sic],” and promised “if i ever see u on campus i am going to cut u till i see blood.” Nash reported these comments to Facebook, the university administration, and filed a police report.

While I don’t believe administration should pay attention to political statements by students (much less order them to come to campus and explain themselves), I do believe that when one student threatens another with physical, mortal, violence, that’s when admin should do something.

The deanling won’t move to stop the violence against the outspoken student, of course, because he’s intellectually dishonest here: this guy doesn’t care about student conduct (despite his ponderous title)…he cares about Social Justice warfare, a warfare that doesn’t have much in the way of compassion or tolerance for opposing views.

The vitriol is particularly strong here, because the SJWs feel like the student has betrayed them:

“I believe students are mad about me being a gay conservative because it’s so foreign and unheard of,” Nash says. “Most students on my campus are extremely liberal and have a hard time understanding how a gay man could be conservative. These students hold the false belief that gay people are being oppressed by conservative groups. They think of me as a traitor of sorts, I appear to be siding with the enemy.”

I’ve mentioned before the incredible hatred and bigotry that conservatives must endure on campus; I’m sure it’s a big factor in why most faculty and students are liberal.

Please understand this whole movement is toxic and self-destructive. Ultimately nobody is pure enough, everyone who is against this movement is “the enemy” and a “betrayer of the cause.” As their power grows, more and more effort will be made to weed out the impure, until…?

I can’t understand the end game here, although I suspect it will involve administrators with titles fifty times longer than their names.