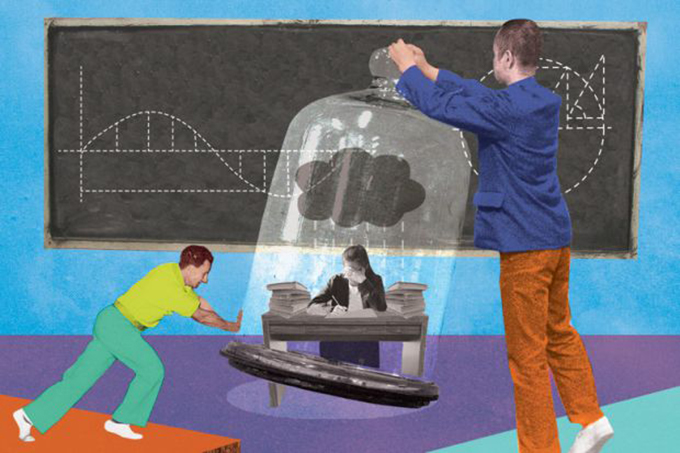 A growing literature exists on the emotional issues faced by undergraduates, but far less attention has been paid to the psychological needs of postgraduates in general and doctoral students in particular.

Some PhD students thoroughly enjoy three or four years of personal growth and intellectual maturation. Too often, however, the experience is blighted by anxiety and even depression.

There are several reasons for this. The first is the insecurity that arises from the nature of the PhD. Unlike undergraduate study, research is necessarily open-ended. Unexpected experimental data or the discovery of a previously unknown manuscript can undermine everything the researcher has previously achieved.

Moreover, the PhD is in itself a very open-ended exercise. Especially in the early stages – and sometimes for much longer – the goal is often unclear. A major challenge for students is to define the parameters of their project, with – or sometimes without – advice from their supervisors. They frequently have unrealistic expectations of what they can achieve and must redefine the scope of their research as it proceeds. They also find it extremely difficult to judge whether their work meets the rather imprecisely expressed requirements to pass.

The anxiety is only ramped up by meetings with their supervisor, presenting conference papers, charting subsequent employment options and negotiating both the upgrade examination and the final viva.

In addition, doctoral study can be marked by loneliness and boredom. As undergraduates, students belong to sizeable peer groups attending the same lectures, tutorials and laboratory classes several times a week. Amid any difficulties, those peers act as the first line of support.

By contrast, doctoral students often have little contact with other research students. Outside the sciences, they may come into their department only for supervisory meetings and an occasional seminar. The rest of the time they are alone in the library or at home. Those who are prone to depression often find this lonely existence very difficult to tolerate.

It can also mean that they struggle to maintain enthusiasm for their research topic. While it is usual for students to experience periods when their work is not progressing well, some become disillusioned and may even opt to abandon their PhD.

Doctoral students who feel overwhelmed by anxiety or depression should seek advice from their GP. But as students are often reluctant to do so, friends and supervisors who see warning signs should be supportive and encourage them to seek medical assistance. Universities could help here by providing supervisors with training to help them identify symptoms. When a significant mental health issue is diagnosed, the student may be registered as disabled and referred to the university’s disability advisory service for counselling, mentoring or therapy.

But supervisors are also frequently part of the problem. They are the most important influence on the student’s life, but anecdotal evidence suggests that a high proportion of doctoral candidates consider their supervision to be inadequate, both quantitatively and qualitatively. While some of the blame can legitimately be directed at supervisors, many of whom are hard-pressed for time, the student-supervisor relationship is fraught with inherent difficulties for both parties.

It is emotionally complex and is often marked by unstated expectations on both sides. The considerable power wielded by the supervisor over the student’s fate means that the relationship can be highly charged, even destructive. Some students can handle this asymmetry and make the partnership work. Others feel – or are made to feel – inferior and subservient, especially if their sense of self is already undermined by loneliness and anxiety.

It can be helpful to think about the supervisor-student relationship by analogy with families. Postgraduate students, typically in their twenties, encounter in the supervisor a second mother or father figure, who dominates their lives and to whom they turn for nurture. When that is not forthcoming, the student may feel disoriented and rejected. Excessive nurturing also has its problems in that it fails to prepare the “child” for independence. And just as some parents apply excessive pressure when trying to direct their children’s behaviour, over-controlling supervisors can similarly undermine their (allegedly wayward) students.

There can also be rivalry between research students as they compete for their supervisor’s largesse and the only postdoctoral position on offer. Or, to adopt a more Freudian perspective, a postgraduate student may seek to “kill the father” by publicly challenging the supervisor’s cherished theories.

Problems with supervisors can be difficult to resolve. If they are severe, students can approach the postgraduate adviser in their department or an adviser in the students’ union. But in extreme cases, a change of supervisor must be considered, and departments should not drag their feet over this for fear of offending the supervisor or out of distaste for the administrative upheaval involved.

Postgraduate handbooks should clearly specify students’ rights and duties, and university websites should publicise the code of conduct that supervisors are expected to follow. When this is breached – for example, by failure to meet with the student over an extended period of time – there may be grounds for a formal complaint, and students’ unions should be as ready to advise on this as they are on undergraduate complaints about courses.

Doing a PhD is demanding, intellectually and emotionally. But with greater awareness from supervisors and doctoral students themselves of the inherent psychological demands, it should be possible to achieve intellectual growth without sacrificing emotional stability.

Author Bio: Geoffrey Cantor is professor emeritus of the history of science at the University of Leeds. He works part time in London as a mentor to university students with disabilities.