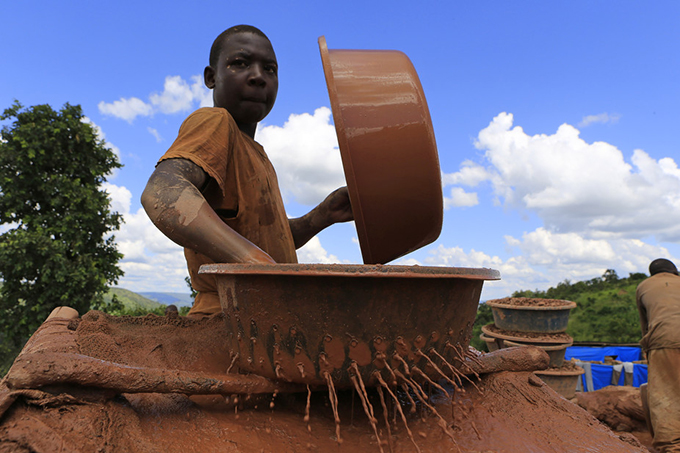 Children are particularly vulnerable to being forced into labour, trafficked from rural areas to cities and then trafficked again within cities. They can’t communicate assertively and are physically powerless next to most adults.

In Tanzania, just more than a quarter of children aged between five and 14 – approximately three million children – are working rather than attending school. Many have been forced into this situation by adults.

Tanzanian children are kept out of school for a number of reasons: the costs associated with uniforms and supplies; the long and potentially unsafe distances from many rural areas to the closest schools; and a lack of awareness among parents about the far-reaching benefits of education.

Pupils in Tanzania, whether in urban or rural areas, often have to travel large distances to and from school. In cities like Dar Es Salaam, some children travel up to 60kms from home and often miss their first morning lessons. They are then punished by teachers. It also takes them hours to make the return journey.

In rural areas, a lack of reliable public transport exacerbates the great distances. Pupils in these areas have to cross farms, forests and rivers to reach schools, which can make them physically vulnerable – and targets for those who abduct and traffic children.

Poverty is a huge driver of child labour. Children may be sent away from their homes to work; they may go to live with extended family after losing their parents to HIV/AIDS and be forced to “earn their keep”. They may, in some cases, choose to leave home without their parents’ permission and start working.

There is legislation in place to prevent human trafficking, but it’s clear this is not being used well enough by the East African nation to protect its children. Could at least part of the solution to this human rights crisis lie in improving the primary school system and children’s access to it?

Tanzania has made significant progress in the past decade-and-a-half towards achieving universal primary education. It has also done well to boost gender parity by getting more girls into school.

This was achieved during the implementation of the Millennium Development Goals, translated by Tanzania into the country-wide Primary Education Development Program. But after an initial burst of success, this ambitious plan seems to be stagnating.

In 2002, the program’s launch year, total enrolments in Standard 1 shot up by 43.1%. They then started to tail off and didn’t rise again until 2007. There are two groups of Tanzanian children in Standard 1: those who are starting primary school and those who are repeating the first grade.

The government hoped that the program would, after a few years, clear the backlog of children not enrolled in school and that any subsequent increase in enrolment would reflect natural population growth. This is not happening. In fact, increases in enrolment are much lower than the population growth, which means that the enrolment rate is actually declining.

The number of children repeating Standard 1 has risen to an average of 10% each year since the program’s inception. This suggests inadequacies either in the school environment, weaknesses in teaching or children’s general school readiness.

The children I’ve described above are those who are actually able to attend school. What about those who are kept away because they’re forced to work?

Some children – about 21.6% of those aged between seven and 14 – attend school in Tanzania while working part time. They usually sell groundnuts, cashews, fruit and other snacks at public beaches, bus stations and along highways, especially during the peak evening hours.

This is not necessarily a bad thing: research has suggested that more flexible school systems can support children who must work to assist their families.

But, as I pointed out earlier, around three million Tanzanian children simply don’t go to school at all during the crucial primary school years. They work full-time, doing gruelling jobs as miners or domestic workers.

Since they never attend schools, many of these children remain illiterate into adulthood. They are very unlikely ever to become functioning members of the formal economy, which means the country is denied some the human capital it requires to grow.

These working children also suffer emotionally, separated from their families and – as research from around the world has proved repeatedly – deeply traumatised by their experiences.

There are several ways in which the government could start to improve the lot of Tanzania’s children.

The first is financial. Government should provide subsidies to pupils to cater for indirect or hidden costs such as uniforms, textbooks, sanitary towels for girls and transport. This could help to mitigate against absenteeism and drop-outs, especially for children from poor families. Money could also be redirected to build hostels within school compounds so that children don’t have to travel long distances each day.

There is also a need for the government, through schools, to sensitise Tanzanian families to the importance of education. So that people start to understand how one child’s education can improve their own lives, their families prospects and even, in the long run, the country’s economy.

Finally, the government can’t just give up on those children who already seem lost to the system. There must be systems in place to help them integrate into schools and continue – or start – their education.

Author Bio:Simon Ngalomba is a Lecturer in Educational Foundations, Management and Life Long Learning at the University of Dar es Salaam