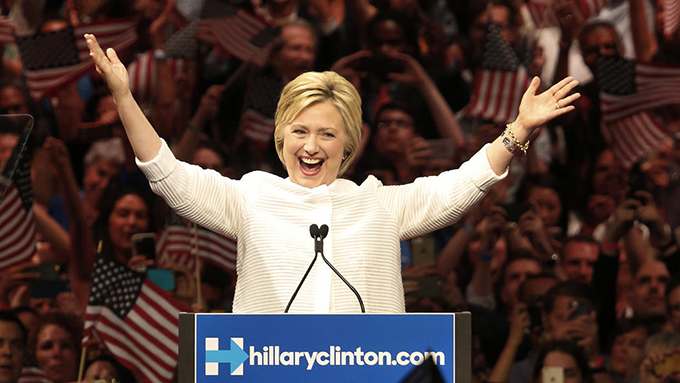 As an American woman, I am proud to tell my sons and daughters that for the first time in U.S. history a woman is the presidential nominee of one of the two major political parties in the country. And though I have some policy differences with Hillary Clinton, there is one thing she understands better than any of the others who vied for the nomination – that the security of women and the security of the world are integrally linked.

Our findings echo those of other scholars who have found that the larger the gap between the treatment of men and women in a society, the more likely a country is to be involved in intra- and interstate conflict, to be the first to resort to force in such conflicts and to use higher levels of violence.

The situation, status and security of women affect multiple dimensions of national security, such as levels of food security, stability, prosperity, bellicosity, corruption, health, demography, regime type and (yes) the power of the state. The days when one could claim that the situation of women is a “small bore” issue in foreign policy should now be emphatically over.

When Clinton was secretary of state, the global empowerment of women was enshrined as a key foreign policy objective. While there were failures as well as successes in that endeavor, Clinton is right to insist, as she did in 2012, that “the subjugation of women is a threat to the common security of our world and to the national security of our country.”

Valerie M. Hudson is professor and George H.W. Bush Chair, and directs the Program on Women, Peace, and Security, in the Department of International Affairs at the Bush School of Government and Public Service at Texas A&M University.

On history and ambivalence

Hillary Clinton is the presumptive Democratic nominee. When my grandmother was born, women could not vote.

Today, for the first time, a major political party has made a woman their standard-bearer. On the one hand, it’s a really big deal. On the other hand, ambivalence reigns among Democrats and Secretary of State Clinton is deeply unpopular for a major party nominee. There is not the same fanfare and pride that Democrats felt when nominating another pathbreaker in Barack Obama.

The history of women in politics suggests it had to be like this.

Female social movement leaders in the U.S. have often been vilified as they pushed progressive, and not so progressive, agendas. Unlikeable, unfeminine and shrill are familiar adjectives. Within the movements, cross-cutting cleavages of age, race, ethnicity, class and political ideology regularly splintered women’s organizing.

Whether change can come from joining government and business, or must come from dismantling these institutions, is a defining question for all three major waves of women’s organizing. Elite white women have disproportionately benefited from each wave of women’s organizing in the United States. And, importantly, while left-leaning men, and men more generally, now theoretically endorse women in power, they often undermine or abandon those women who dare to unapologetically seek office or rank.

Hillary Clinton has experienced all of this. Recall she used to be Hillary Rodham – before voters weighed in that the “Rodham” was too much. She was the Wellesley graduation speaker – outspoken, challenging, left wing and feminist.

Yale Law followed, and then a move to Arkansas promoting her husband’s career. Vilified in the White House by the right, undermined for her “improper” policy role as First Lady, critiqued as her husband’s cheating become so very public, ambition questioned when running for the New York Senate seat, boxed in to not question her own vote on Iraq because of gendered expectations that a woman could not run and win if she admitted a failure on foreign policy. Institutional Democrats abandoned her, even with all the money, for the Obama candidacy. And now the young left sees her as hopelessly institutional, while institutional Democratic men and the voters who favor them have always held her at arm’s length. Bernie Sanders gains traction only because of the ambivalence felt for her on the left and hatred by many on the right.

These reactions are telling. Hillary Clinton has worked the highest levels of power. She has worked the Democratic Party – bringing a major institution toward her – and it required the compromises of insider politics. The right hates her for wanting the power, the ambition. Elements of the left deplore her for the calculation – for going moderate or going hawk as it advanced her.

All this has made her a major party candidate. And it’s a really big deal both for the skill, delay and finesse it took to get here and for the disproportionate venom she has felt from the right and far left. Vice President Joe Biden and Secretary of State John Kerry are her political kin, after all, but garner nowhere near such emotive reactions. They could tell Bernie to just get out. She cannot.

No other woman in American history has successfully negotiated the cross-cutting pressures of the feminist movements that bore her, the party that took years to truly embrace her and an electorate that is so deeply polarized about her.

There is no denying that she is “badass.” And that’s a good thing. It got her here. Wounded in some ways, disliked by many, but firmly at the fore. The first realistic female president had no other path.

Erin O’Brien is co-editor of Diversity in Contemporary American Politics and Government and the chair of the politic science department at UMass Boston.

We would all be remiss to ignore the significance of Hillary Clinton’s nomination. It is further evidence of the opening of American society. Her nomination will no doubt serve as an example and inspiration to many girls and women who aspire to the pinnacles of political leadership in this country and around the world.

Clinton enters the general election season with a unique set of advantages and disadvantages. She became a household name as First Lady. This notoriety helped her in the primaries against the lesser known Bernie Sanders, but it also repels some voters, who, fairly or unfairly, did not appreciate her role in her husband’s administration or trace her perceived corruption back to the days of Whitewater.

Her opposition also presents opportunities and challenges. She and Donald Trump both enter the general election season with high negatives. The question remains whether Trump can continue to offend with impunity and whether Clinton looks relatively better by comparison.

Then there is the issue of the change mandate.

As my colleague Charlton McIlwain pointed out after the 2008 election, voters preferred Barack Obama’s change over Hillary Clinton’s strong leadership. The insurgent candidacies of Donald Trump and Bernie Sanders evince a strong desire for change, perhaps even change at all costs. Clinton is going to have to figure out how to use her experience as a credible asset and present herself as ushering in policy and not just descriptive change. And she is going to have to contend with the reality that she is running for a third Democratic presidential term in an era marked by regular shifts in partisan control of the executive branch.

Ultimately, this race is going to come down to organization and mobilization. This race is poised to be divisive and demoralizing. Clinton will need to harness her experience to mobilize effort of all of her election constituents to guarantee herself a victory.