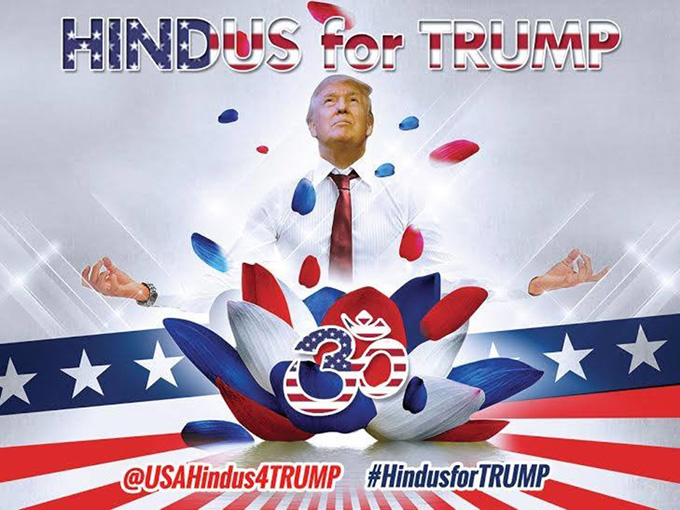 Republican nominee Donald Trump was recently invited to a fundraising event organized by a conservative group of Hindu Americans, the Republican Hindu Coalition. A poster from the event, which describes the group as “Hindus for Trump,” portrays the candidate in a posture much like that of a yogi in deep meditation.

It shows Trump, face pointing upward and hands outstretched, rising up from a mass of red, white and blue flower petals in the shape of a lotus. Prominently displayed in the center is the Indian sacred syllable, “om,” decorated with stars and stripes.

Om is the preeminent Sanskrit mantra and symbol of Indian religions, especially Hinduism. In terms of religious identity, this sign denotes Hinduism in much the same way that the star of David and the Christian cross represent Judaism and Christianity. Om has its own dedicated sign in the scripts for Hindi and other Indian languages.

In global culture, the om sign has come to stand for Indian spirituality in general. It has been widely adopted by practitioners of yoga and meditation.

However, contemplation, transcendence or Indian spirituality would seem to have little in common with Trump’s public persona that has been described by the media as reflecting “narcissism, disagreeableness, grandiosity.”

So, what should we make of this juxtaposition of Trump and India’s “sacred syllable”?

For the uninitiated, here is what om means

The history of om stretches back more than 3,000 years. Om was first attested in the Vedas, a massive corpus of ancient “knowledge” (“veda” in Sanskrit) from the first millennium B.C. that furnishes the oldest and most authoritative texts of Hinduism.

The Upaniṣads, a collection of later Vedic texts regarded as the foundation for Indian philosophy, hailed om as “this whole world” and as the singular distillation of all wisdom. 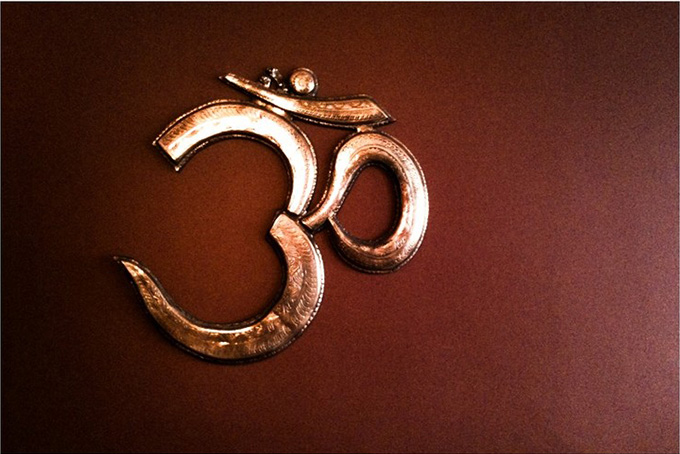 Subsequent texts on Hindu law from the start of the Common Era codified the practice of intoning om at the start of every sacred recitation.

Hindu theological discourses emphasize that the sound of om is not of human origin – rather, it is a divine revelation and an audible expression of transcendence. By chanting or contemplating the mantra om, a practitioner gains access to a higher state of consciousness that leads to liberation from the cycle of rebirth.

In all these respects, the syllable has served as the quintessential symbol of religious authority in Hinduism – a role it continues to play up through the present day.

This history, however, is not that simple. My research into om’s early history reveals that this symbol, much like the Hindu traditions it has come to represent, is neither monolithic nor static.

Om did not emerge suddenly as a full-fledged symbol of knowledge and the cosmos. Instead, premodern Hindu thinkers gradually constructed om as a single concept through contentious debates and theological reflections.

My research shows om in the Vedas does not have a single form or meaning. It is recited in many ways, appears in many different ritual contexts, and inspires a wide range of interpretations.

For example, Vedic experts in music described it as the sound of the sun, since it introduced their songs just like the sun signals the start of the day; the same singers called om “honey” for the sweetness it added to their melodies. Vedic specialists in sacrifice glossed om as an affirmation of ritual actions, as the “truth” inherent in their mantras. Other Vedic thinkers maintained that om was a secret password for attaining immortality at the moment of death. 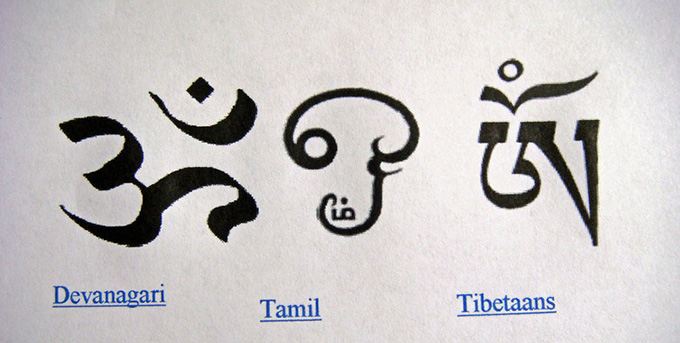 Such examples could be multiplied many times over, not just in the Vedas but also in subsequent texts from Hindu, Buddhist and other Indian religious traditions where om is central to discussions about yoga, meditation, creation and salvation.

The bottom line is that India’s sacred syllable emerged over many centuries, depended on the contributions of different voices and accrued countless meanings along the way.

As a researcher of om, whenever I encounter the sign – whether inscribed in a manuscript, displayed at a Hindu temple or featured on a Donald Trump poster – its history of multiple meanings flashes into my mind.

There is no one Hindu voice

Now, against this background, let’s look at what the Hindus for Trump group is doing with its juxtaposition of Trump and om.

Hindus for Trump is closely allied with the Republican Hindu Coalition (RHC). Founded in 2015 by businessman Shalli Kumar, the RHC claims to provide “a single, unified platform for raising voice of Hindu Americans in public policy.”

In my view this raises the following issues:

Although in some contexts om is simply shorthand for “Hindu,” it seems problematic to harness this complex symbol to the single agenda of right-wing political activism among Hindu Americans.

Additionally, this raises another question: Do Hindu Americans really speak with only one voice? 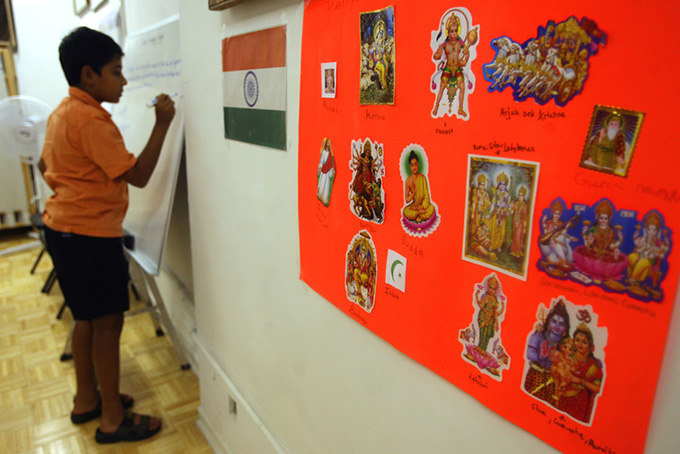 A poster displaying the religions of India at the India Heritage Camp held in New York. Mary Altaffer/AP

Judging from the protests and the backlash on social media, there are many Hindu Americans besides Hindus for Trump and the RHC who might be inclined to associate Trump with syllables more profane than sacred.

Om’s history exemplifies the fact that Hindu traditions and Hindu identity are complex and varied. “Hinduism” covers an astonishing array of doctrines, practices and lifestyles in India, Asia and around the world.

While Hinduism’s history has not been free from conflict, there is an abiding openness to diversity at the roots of the tradition, as this famous verse from the Vedas attests (Rig Veda 1.164):

“Truth is one but the wise call it by many names.”

From a temple complex in suburban Boston to a street shrine in Varanasi; from Sanskrit dramas in Kerala to processions in Nepal – every day, practitioners, devotees and regular people create, contest and carry forward the traditions of this world religion in multiple ways.

The jarring juxtaposition of Trump and om reminds us that there is more to Hinduism and its iconography than a political poster can convey.