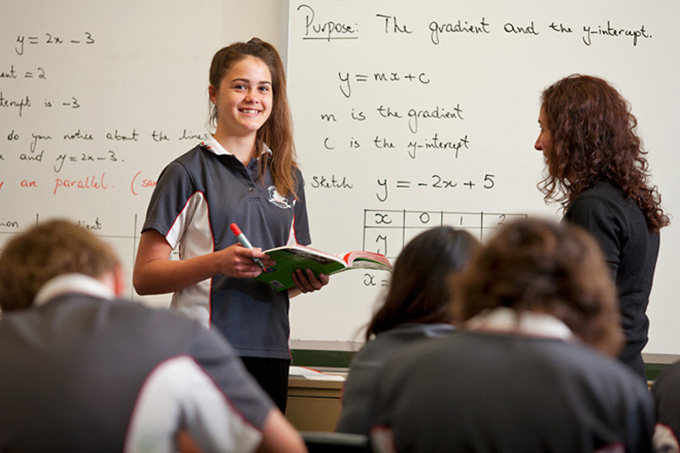 The math achievement of American high school students in 2015 fell for the second time in a row on a major international benchmark, pushing the United States down to the bottom half of 72 nations and regions around the world who participate in the international test, known as the Program for International Student Assessment or PISA.  Among the 35 industrialized nations that are members of the Organization for Economic Cooperation and Development (OECD), the U.S. now ranks 31st.

Both reading and science scores were steady, with U.S. students scoring near the international average in both subjects.

“We really are doing a lot worse in math than we are in science and reading,” said Peggy Carr, the acting commissioner for the National Center for Education Statistics, who had early access to the PISA results, which were released to the public on Tuesday.

Carr emphasized that the 2015 PISA results showed that students across the board, from bottom to middle to top performers, were doing worse in math. It wasn’t just one segment of students who brought the national average down.

“We need to take a strong look at ourselves in mathematics, particularly since we’re beginning to see a downward trend across assessments,” Carr said.

The weak math performance echoed the results of a second national exam, the National Assessment of Education Progress (NAEP), on which 4th and 8th graders also posted lower math scores on the 2015 test.

The PISA test is administered every three years around the world to measure what 15-year-old students know in math, reading and science before the end of compulsory schooling. In the United States, it’s primarily taken by 10th graders. The U.S. has never been a strong performer globally, but has generally scored near the average since the test began in 2000.  In 2012 math scores deteriorated a few points. Now, with the 2015 results in, it’s a clear downward trend.

Andreas Schleicher, director for education and skills at the OECD, which administers the PISA exam, said that math has always been the most difficult subject for American students. Even students in Massachusetts, one of the top performing states in the nation, do no better than average globally, Schleicher noted.

In an online briefing for journalists, he said that higher performing nations structure their math curriculum differently, teaching fewer topics, but in greater depth. They also teach math topics in a sequential order, Schleicher explained, asking students to master one topic at a time, rather than cycling back to the same concept year after year.

“Students are often good at answering the first layer of a problem in the United States, but as soon as students have to go deeper and answer the more complex parts of a problem, they have difficulties,” he said.

The timing of these results comes just a few years after the Common Core standards were adopted in most U.S. states. But Schleicher, who is a proponent of the new standards, said that it’s still “too early to judge” if they’re working. He pointed out that implementation had only just begun in 2015 and that many years of Common Core-aligned instruction will need to pass before it reaches 15-year-olds.

“What I would says is that the Common Core concept is quite well aligned with what we see in many high performing education systems,” said Schleicher. “Of the things that the United States has recently done, probably that [Common Core] has one of the greatest promise, in my judgment, but we can’t prove it.”

Schleicher pointed to two silver linings for the United States. In science, the achievement gap between rich and poor is closing, albeit not by enough yet to raise the overall score of the whole nation. And second, even though only a small portion of U.S. students hit the most advanced level on the science test, the country is large enough that it still produces 300,000 high-performing 15-year olds in the subject. Among the four regions in China that currently participate in the PISA test (Shanghai, Beijing, Jiangsu and Guangdong), a higher percentage of test-takers hit the advanced level, but that still produces fewer top science students — roughly 180,000.

The U.S. actually improved its rankings in reading and science, because other nations did worse and slipped in status. Among the 60 nations and regions that took the PISA test in both 2012 and 2015, the U.S. ranked 15th in reading and 18th in science, up three notches in each subject, despite the fact that U.S. achievement didn’t improve.

One of the nations that slipped considerably was Finland, which had been a beacon to education reformers for its strong results in previous years.

Singapore regained its top slot, and continues to show achievement gains every three years. It had been temporarily dethroned by Shanghai, an elite, wealthy region in China, where the scores were extraordinarily high during the previous testing cycle. But now that Shanghai’s scores are combined with three other Chinese regions, mainland China has slipped to sixth place.

There’s been a flurry of test results this fall, and they’ve generally been showing a similar picture of flat reading and science scores, but falling math scores. However, one test released last week —  the 2015 Trends in International Mathematics and Science Study (TIMSS) — showed a surprising gain for the U.S. in 8th grade math.  Historically, PISA and TIMSS tests have shown contradictory results for Eastern European countries and Russia, as they perform much better on TIMSS than on the PISA test. Scholars will need to explain the divergence for the U.S. this past year.