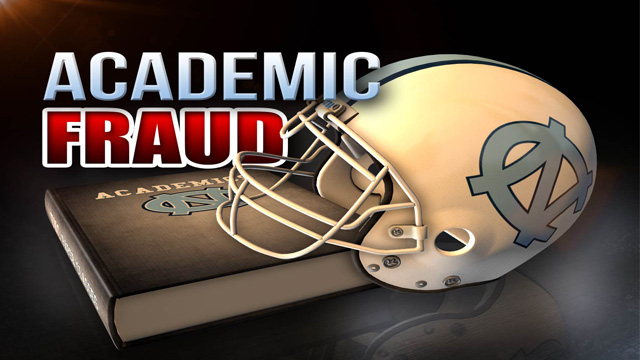 A recent book on the UNC scandal involving 18 years of fake classes, affecting thousands of students. The “customer” reviews on the book are rather split between 1 star votes and 5 star votes. I put “customer” in quotes because many of the 1 star votes aren’t verified purchasers…just folks that hate the book without, probably, reading it.

Many of the negative voters cite “UNC’s academic fraud is no different than the academic fraud at many other institutions.” This is true, many campuses offer special fake courses and programs to their athletes, who otherwise would have no chance in a college environment. But I don’t think this is enough of a justification to hate a book…why should a book that tells the truth be necessarily bad? It’s clear more people need to know about at least some of the obvious conspiracies going on in higher education today; considering UNC administration spent many years and untold millions trying to squelch the truth about the academic fraud at UNC, I think a book covering it all is justified, even if “everyone else” is also engaging in the same type of fraud.

Somehow, magically, nobody seems to ask why or how, private e-mails between the co-authors were released to the public. It looks like the co-authors had an affair, to judge by the e-mails.

Many critics cite these private e-mails from the authors, saying the e-mails indicated the authors are being less than sincere in their writings. I don’t quite follow the logic, as what two people do on a bed in no way is related to a near 20 year pattern of fraud by UNC.

What I find more interesting here is how the media (and the critics of the book) don’t ask the obvious question: “How did those private e-mails get released?” Having seen admin retaliate against another whistleblower by releasing private e-mails, I know that this sort of behavior is in the administrative bag of dirty tricks. It’s just…weird that nobody considers how these private e-mails get released. It’s not like UNC admin has a clean record when it comes to harassing whistleblowers, I wouldn’t put it past them to release fake e-mails, and I would expect them to “ask” their many underlings to post negative reviews on the book. Why isn’t the source questioned here?

“…….” –no, I’m not going to quote private love letters here, they’re irrelevant to what happened at UNC.

In this case, the e-mails are pretty salacious, but have nothing to do with the UNC scandal. Instead, they reveal a possible affair between the authors of the book. Granted, this puts an extra meaning on the cheating going on at UNC but…no, this doesn’t mean the book is bad, and no, this doesn’t exonerate UNC.

And, again, I point out, UNC administration had access to those private e-mails and almost certainly is responsible for their “random” release to the media, which lapped it up, unquestioningly.

The hypocrisy of the critics here is pretty audacious: “everyone does it” so the UNC’s fraud should be overlooked, meanwhile a sexual relationship between two people working very closely together on a big project (honest, this isn’t rare) should be a major focus…and admin’s vicious retaliation in revealing the affair is just par for the course for the rulers of our higher educational system.

The administrative hypocrisy is well worth exposure, however. Always when I tried to report the frauds an inappropriate behavior at the community college, on paper admin was all “we’re very interested to hear about it” while the reality is no interest whatsoever, along with retaliation for me trying to stop the inappropriate behavior.

I want to demonstrate this sort of hypocrisy by looking at some documented activity at UNC; yes, these are e-mails, but at least these e-mails are submitted by one of the persons involved, a whistleblower who tried very hard to resolve the fraud at UNC:

Here’s the whistleblower’s e-mail to the Poo Bah:

President Ross,
Last week an article written by Dan Kane mentioned that UNC Administration hired a PR firm to refute my claims. …Kane’s article mentions that you might be interested in hearing the truth. If you would like to listen to my interview with general counsel…or Jim Martin…I have retained copies. I would also welcome the opportunity to speak with you in person.

UNC did everything it could to silence the whistleblower, to the point of spending huge sums of money to discredit her. The Poo Bah, of course, despite any public assertion of interest in learning the truth, had no such interest, and completely blew her off:

Dear Ms. Willingham,
Thank you for your e-mail and offer of assistance. I have access to your interviews and will call upon you in the event I need additional information.

It really seems like the whistleblower was willing to work with UNC admin to fix the problem…but admin saw no problem with fraud.

When she sued, Willingham said she hoped to accomplish what no other investigation has done — to subpoena documents and to depose university officials under oath. Her lawsuit never got that far.

Despite the extensive character assassination by UNC, they did eventually decide to settle the lawsuit with her out of court, for $335,000 (like I said, UNC’s record when it comes to harassing whistleblowers isn’t clean…) in exchange for not having any more truth revealed. Gee, if UNC was so confident the whistleblower was lying, why settle for so much? That’s not even half as much as they spent on the PR firm they hired to assassinate her…

I know, I’ve covered the immense fraud and cover-up of the UNC scandal, but just in case the gentle reader has missed the previous, allow me to present another quote from an article about the book:

Using the players’ online IDs and passwords, administrators and tutors masqueraded as the players in submitting bogus coursework. This was all allegedly managed by the director of basketball operations who reported directly to the school’s revered head basketball coach, Jim Boeheim.

Now, one of the many questionable lines admin has fed the gullible public about the UNC scandal is that it was restricted, mostly, to the sportsball players. But I really feel the need to point out the implication of the above quoted paragraph:

There’s nothing to stop administration from just logging in as a student and submitting bogus coursework, allowing a student to pass.

As I’ve said before, there’s no reason to trust online work at all. That’s just the online courses at UNC, but I’ve cited a few institutions where admin cuts out the middleman and just changes the course grade directly. Now I wish to point out another important implication from the UNC scandal, where this sort of fraud was practiced:

Even with very credible allegations of this level of fraud, it takes 18 years of repeated investigations before, finally, the allegations are revealed to be true…and not one single person responsible for the fraud will pay even the slightest penalty.

Now, maybe the gentle reader can ignore my allegations that academic fraud regarding athletes is fairly common in higher education, but even if my own eyes are wrong in this matter, I promise that the Poo Bah of every sportsball university in the country is looking at what happened at UNC and considering the implications I’ve raised.

Every Poo Bah is now thinking “Gee, there’s no drawback, and I’ll get more money if I do the same thing UNC has been doing for nearly 20 years.” Even if the huge fraud at UNC is rare, it’s a safe bet that will be quite common in the future.