The University of Leeds has recently become the latest higher education institution to raise money by issuing a public bond. The bond is worth £250m, has a maturity date of 2050 and a fixed interest rate of 3.125%.

The ability to raise low-cost funding through issuing a public bond – essentially a long-term loan at low, fixed interest rates – has gained popularity as an attractive option for universities. The most recent bonds issued at Leeds and Cardiff University have the lowest interest rates ever for a UK university bond at 3.125% and 3.1% respectively.

While frequently used in the US, public bonds have not generally been a common form of funding for universities in the UK – or Europe more generally. This might be a consequence of the historical reliance of European universities on state funding for large capital projects and the reluctance of university managers to see their institution as a business.

Concerns that universities have had their fingers burnt in the past by public bonds may also have temporarily deterred institutions from pursuing this funding route. Lancaster University issued a public bond in 1995 at a high interest rate and subsequently ran into financial difficulties because of onerous conditions attached to the bond, and decided to refinance it by entering into a new arrangement for the remaining debt. The University of Greenwich launched a bond in 1998 but subsequently withdrew it following a downgrading of the credit rating.

But since the financial crisis, government funding for universities has dropped – most recently by £150m in July 2015 – and traditional bank credit has been difficult to obtain in post-crisis markets.

A public bond is traded on a stock exchange. Any university issuing a bond must repay the principal (the amount borrowed) on the maturity date (perhaps 30 to 40 years after issuance), as well as a fixed rate interest throughout the lifetime of the bond. The interest rate is related to the rate at which the government could borrow with the same maturity – this is called the gilt yield – and the university’s creditworthiness. The interest rate will be higher than the gilt yield – precisely how much higher will depend (at least in part) on the university’s credit rating which must be obtained before issuing a public bond.

In contrast, a private bond is much simpler (and hence cheaper) to set up than a public bond. It is not sold on the stock exchange, but rather to a small group of investors via an intermediary, and therefore does not require a credit rating. The downside is that interest rates may be higher than for a public bond, or there might be more onerous conditions attached to it by the bond holders, in order to provide assurance that the loan will be repaid.

An added distinction is that public bonds, given the set-up costs, are used to raise considerably larger sums of money than private bonds, which have been more common sources of low-level funding for universities. For example, in 2007 the University of York issued private bonds totalling £66m and maturing in 2047 with interest rates of 5.14% and 5.16%.

With the current low UK gilt yields, public bonds are currently an attractive low-cost source of finance to universities facing difficult economic circumstances. Government funding cuts, combined with £9,000 tuition fees and the lifting of a cap on the number of students universities are allowed to let in, have led to cut-throat competition for students domestically, and universities continue to compete for international students.

Investors also like university bonds: they provide a higher return than government debt and are seen to be attractive as the UK higher education sector is regulated and hence low-risk.

While interest rates are low, public bonds might therefore seem a viable option for higher education financing. Still, they are unlikely to be a solution for all: only those universities wishing to borrow a sizeable sum, with sound financial performance and good projected revenue streams can really benefit.

Students are the commodity

Revenue streams are highly correlated with the ability to attract students. Domestic student demand has been volatile since the removal of the student cap. Some elite Russell group institutions, for example, have made a large increase in intake compared to some newer, post-1992 universities where the impact has been negative. Forecasts suggest that home and EU undergraduate numbers will increase by 8.5% between 2013-14 and 2017-18, but growth in numbers will be markedly different between universities, as the graph below shows. 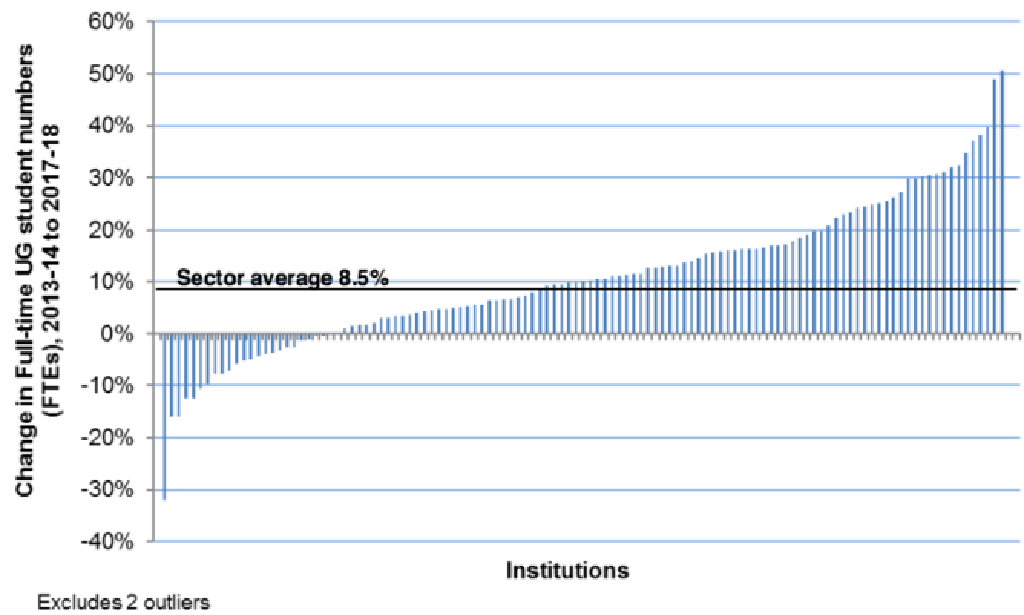 Forecast change in full-time home and EU undergraduate student numbers between 2013-14 and 2017-18. HEFCE

The higher education sector as a whole is financially sound, but financial performance varies across institutions and the gap between best and worst performers is widening.

Public bonds are likely to be crucial in financing much-needed investment in new university infrastructure. But they may also lead to wider gaps between the institutions which make up the sector – with the large elite universities benefiting most from the cheap loans and the investment in facilities which they offer.

Author Bio:Jill Johnes is a Professor of Production Economics and Director of Research, the Business School at the University of Huddersfield