I’m in Australia at present. Inevitably I’m running some writing workshops. Inevitably I’m playing with some new strategies. I really do like to try out new things to see how they work, what they might do. And one of the new things on this trip was the ransom note.

Now I’m sure that you all know what a ransom note is. It’s a short letter of demand. I have your cat. If you want it back you need to pay me a lot of money. Don’t tell anyone or I’ll send your cat to Antarctica. Or words to that effect.

Ransom notes are stereotypically manufactured from letters cut randomly from newspapers. Pre computer, the cut and paste method avoided a typewriter or printer ‘signature’ being identified. That’s outdated tech now – but we still generally associate a ransom note with something made from mismatching, miscellaneous letters. But no need for the newspapers if you can’t be bothered… there are now free software programmes – see here and here – which randomize letters to produce fake ransom notes.  And that’s what I’ve been using in my workshops.

(1) in a boot camp dedicated to writing part of a thesis.

The instruction I gave to participants was Sum up what you’ve found in your research in one sentence. Don’t make it too long. Just think about the most important thing you have to say.

Now, writing just one sentence summing up the point to be made in the thesis, or in a chapter, can be very hard. People did find it difficult to move away from I’m trying to, I want to write about, I am exploring… and actually produce a definitive statement. But of course, that was the point of the exercise.

Moving away from the tentative and/or the detail to the big take-home message is crucial. It’s a shift which makes the thesis work. Once you have the overall point you want to make, you can organize your material into a coherent argument. The ransom note with the definite point to be made can act as a signpost for the writing to come. Once you know where you are heading, you can plot your journey. 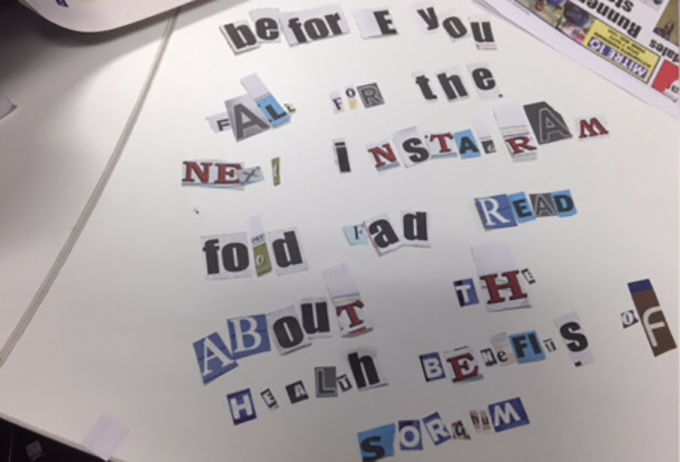 The people who found it hard were those who wanted to sit on the fence, thinking that this kind of exercise removed the nuance that is important. It doesn’t of course. There is a difference between a nuanced argument which still goes somewhere and writing which just waffles all over the place. Pulling out the basic message is actually a great anchor for a highly nuanced piece of writing. Knowing the overall direction ensures that you don’t leave the reader wandering around and around, wading through point after point and getting nowhere.

In a workshop for people writing a journal article from their thesis, the instruction was Write one sentence which sums up the major message of the thesis. Write it as directly as you can to the person or people that you most wish would read your research results. You can even use four letter words if you feel so inclined.

People in the ‘voice’ workshop seemed to find this exercise easier to do than those writing about their major thesis point. Most people in the workshop could imagine themselves talking to a policymaker, practitioner or perhaps even another researcher. They could hear the kind of thing that they would say, if only they could. 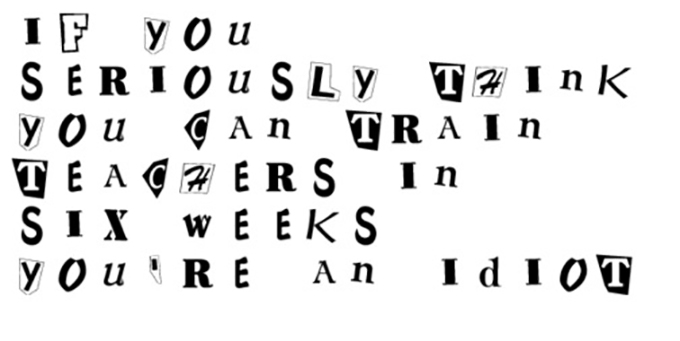 The point of this exercise was to find the energy and the passion about the research and its results. Once that’s in play, it’s easier to write with that energy and commitment.

Writing the talking-back-to ransom note positions you at the start to think about communicating your message. It supports writing something other than anaesthetised prose. You see, writing with authority – with voice – are as much about how you act as how you actually feel. Even if you feel a bit shy about your research results, you can still write from a position of authority – you act textually to signify confidence in what you want to say. The ransom note is one strategy to support that identity move.

But I have to be honest.

These two short exercises haven’t worked equally well for everyone. They did however seem to have been helpful for some people. They appeared to me to be particularly confronting for participants who were feeling tentative about their research results. Perhaps the exercises helped them to see that at least some of the writing problems that they were experiencing were to do either with lack of clarity or feeling tentative. Well, that’s my hope.

Perhaps you might want to try the ransom note sometime to see what it does for you and whether it can help crunch the point and/or position the writing.