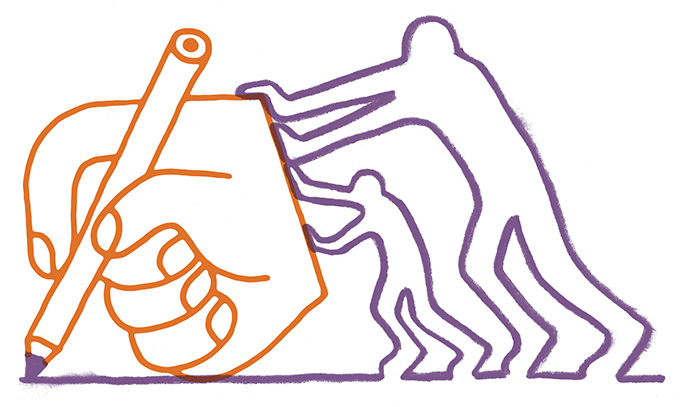 My essay in the May/June 2016 online version of Academe, “What Shakespeare Says about Sending Our Children Off to College,” is meant to serve two purposes. First, and most obviously, it is meant to be a reflection on the odd event of the college send-off, on Shakespeare’s ongoing relevance in modern life, and on Shakespeare’s theory of the “self.” Second, it is meant to be given to students as an example of the kind of writing they will be asked to do in college, which is what I want to address here.

The essay grew out of my freshman writing course at Harvard, where it serves as an opportunity for students to start a conversation about what academic writing looks like. On the first day of class, we spend an hour talking about six words (“To thine own self be true,” Polonius’s speech in Shakespeare’s Hamlet) as a way to start thinking about the kind of academic analysis that unpacks the unexpected and surprising meanings behind things that might seem obvious or familiar on first blush.

In other words, the essay is an example of a “close reading.” A close reading, something which can certainly be done outside literary studies, is probably the most common type of writing assignment in college, certainly the most important, but also one of the hardest. A close reading is an analysis of a single text (or idea, event, object, etc.) that identifies and discusses some interesting or problematic aspect of that text (or idea, event, object, etc.) without recourse to any other texts. In a close reading, it’s just the writer and the text, and it’s the writer’s job to make sense of the text. With my close reading of “To thine own self be true,” I’ve tried to show (1) that new things can be said about old topics that have already received plenty of attention from “the experts,” and (2) that a close reading requires someone to wrestle with a topic him- or herself rather than scour the published criticism in the library or, even worse, the ideas floating around on the Internet (e.g., Sparknotes and Wikipedia).

As a close reading, my essay was not written by someone who has researched the issue in depth (if I’m being completely honest, I don’t know very much about the tradition of moral proverbs that Polonius’s speech participates in, although I should). Instead, this essay was written by someone who was fascinated and puzzled by a little quirk in the most popular and widely known work of art of the past millennium. You don’t have to have a PhD to say something new about Shakespeare or any other well-known topic. All it takes to write a close reading is an interesting text and a willingness to explore it beyond its most obvious features.

The Thesis of the First-Year Writing Course

In the syllabus for my own first-year writing course, I start out by saying that certain modes and strategies of interpretation and argumentation are valuable to life in college and beyond regardless of the discipline or field a student chooses to pursue. In our course, we discuss those modes and strategies using familiar terms such as thesis (an essay’s main insight about a text or topic) and ideas new to them like method (the strategy of interpretation or explanation employed) and what’s at stake (why someone might want to read an essay or need to hear a particular thesis argued). Insofar as the freshman writing course, no less than the papers written in it, is an argument, then what’s at stake in the freshman writing course? What’s the thesis? What’s the method?

What’s at stake is nothing less than success in college and in life. More specifically, students need to know how to write good papers because the paper has emerged as the primary vehicle for scholarly communication. Scholars “talk” to one another through papers, and students “talk” to professors through papers (among other ways). After graduation, students continue to “talk” to friends and colleagues through their writing, even if they are not writing formal academic papers, because they will present their ideas using the skills of interpretation and persuasion discovered in our course and mastered in later courses.

Or, let’s say you’re a structural engineer who needs to build a bridge. You’ve got two reports, one from the state and one from the local university, that give conflicting conclusions about the soil density around the river. At this point, you’re no different than the Shakespearean scholar who reads two different works of criticism, one saying that the Ghost in Hamlet is real, another saying that it’s a figment of Hamlet’s imagination, and must decide for him- or herself what’s true. Like the Shakespearean, you’ve got to evaluate the methods, evidence, and analysis of your experts over and against your own fresh look at the problem in order to determine why there’s disagreement, what’s true, and what’s the best course forward.

The thesis of the required freshman writing course, then, is that rhetoric is a prerequisite for the successful pursuit of knowledge. That is, rhetoric, understood as the study of modes of interpretation and persuasion, is needed regardless of the discipline or field a student plans to pursue because rhetoric equips students with the forms and strategies of thought and speech that they’ll use to discuss material specific to their future academic endeavors, whatever they may be, whether in the humanities, the sciences, or somewhere in between.

That’s what my syllabus says but, on the first day of class, I ask students, “Is there anyone who disagrees with this? Is there anyone who thinks an ability to interpret and articulate things won’t be helpful?” No one ever disagrees and, if so, then that can’t be our thesis. This is our first lesson about writing a good thesis: it can’t be obvious. A thesis that is obvious is just as bad as a thesis that isn’t true. So, on that first day of class, we talk things out until we get to the real thesis for our course: While “writing” is traditionally understood as the expression of thought, our course redefines “writing” as the very thought-process itself. Writing is not what you do with thought. Writing is thinking.

The Method of the First-Year Writing Course

That is why my course, like most first-year writing courses around the country, attends to the procedural aspects of academic writing through an extended exchange of ideas among students, classmates, and teacher: each paper develops over an extended period of time (not a weekend) through a series of readings, discussions, response papers, drafts, conferences, workshops, and revisions.

This aspect of the course can sometimes lead to the complaint that it’s just a bunch of busywork. My response is always the same: Mr. Miagi. “Wax on, wax off.” Like Miagi teaching Daniel-san karate by having him go through the motions—sand the floor; paint the fence; wax on, wax off—the freshman writing course materializes through its sequence of assignments the motions one must go through for effective interpretation and argumentation. There may be times when students feel as if, like Daniel-san, they’re “just going through the motions,” but that’s not necessarily a bad thing. They go through the motions so that they develop the muscle memory for later in life. In fact, if they’re able to just go through the motions, then that’s a sign that, as they go through life beyond the freshman writing course, encountering things that need to be interpreted, they’ll know the motions they need to go through. They’ll have the muscle memory for interpretation when life, Miagi-like, starts attacking them for real and the training they’ve received spontaneously prompts an instinctual response. In the freshman writing course, we materialize the thought process itself through a series of smaller assignments that work up to a big idea, not because we expect students to do all of these exercises every time they write a five-page paper, but because we hope that doing them in our course will help students internalize the steps that need to be taken in order to interpret something effectively.

Author Bio: Jeffrey R. Wilson is a Preceptor in Expository Writing at Harvard University, where he teaches the “Why Shakespeare?” section of the university’s freshman writing course.