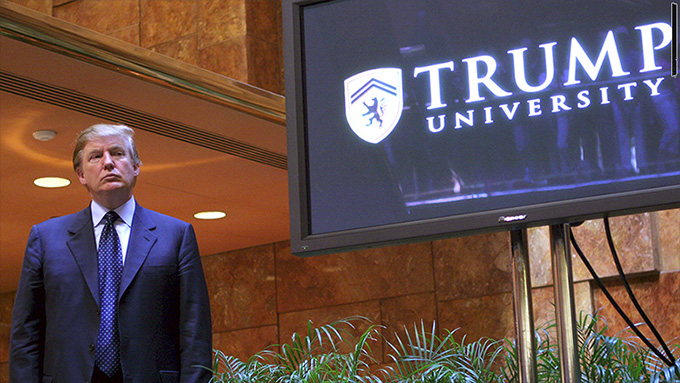 There’s no doubt about higher education being a major source of illicit funds. The primary reason for this is the student loan scam, but part of why the scam works is we’re trained from a very young age that “go to school” is the trick to being a successful person. Thus, we as a people are willing to spend any amount of money (especially money we don’t even have) to get that magical education.

We’ve basically bred ourselves into being suckers for schooling. Thus, if you’re a big shot and you want to make a lot of money, you start a school, or at least go into education administration. Thus it’s no surprise that all three of the top presidential candidates are linked to schools, and I’ll leave it to the gentle reader to determine which is worse: that our political leadership is focused so much on money, or that our schools have such a powerful tendency to be fraudulent and attract the worst sort of people.

It’s an interesting hierarchy of fraud, when you look at the top presidential candidates.

Trump (with Trump University) has been associated with a bogus school, but this school is small potatoes; not being a political insider, he had no way of accessing the torrential downpour of money from the student loan scam. While the school was called “Trump University,” it was no university. It was merely a real estate scam school, of the sort I’ve seen many times, hawking “no money down real estate” on TV at 2am, or the like. To his credit, Trump did hire  a few legitimate academic faculty to create courses for his school, along with less qualified folk.

Having taught at accredited schools with wildly unqualified teachers and administration behaving extraordinarily unethically along with most students being cheated, I’m hard pressed to see what the difference between Trump University and your typical community college is. Yes, Trump University lies about being a university, but community colleges lie about being college…that’s hair splitting if you’re going to call that a difference.

Schnackenberg told the story of a couple he talked to the month before he quit who had no money to pay the $35,000 tuition. Schnackenberg said they were talked into using the husband’s disability income and a home equity loan to pay for it.

Trump University, being a real estate scammy school, at least focused its attention on adults (unlike the kids fresh out of high school who are the primary prey of higher education). Sure, Trump U used a different branch of Federal loan scheme, but we’re still not talking anything like the money that student loans bring to our campuses.

What’s interesting about the Trump University scandal is there is no discussion of how much money was taken this way. Trump U went non-functional in 2011, and was barely in business for 5 years; while I’m sure there are dissatisfied customers, the total amount of money raked in this way was perhaps a few million in revenue, maybe. That’s revenue; the net profit, if any, was not enough to keep this “university” in business.

Sure, the business was as much a scam as all the other “get rich quick in real estate” scams out there. As a business that could never be accredited, was never close to being a university, and probably never turned even a tiny profit, Trump University was nothing.

Let’s move on to a non-profit college that actually was a college.

The wife of Bernie Sanders is associated with looting a small non-profit college.

The method of plundering here is pretty much standard procedure, one I’ve seen many times. She spearheaded a big real estate purchase leading to the eventual destruction of the college.

In recent years, Burlington College has struggled under the crushing weight of the debt incurred by the purchase of the Archdiocese property on North Avenue.

The Poo Bah (in this case, Mrs. Sanders) comes in with big plans for growth, and says the growth must be accomplished by first purchasing expensive real estate at a huge premium, or by buying/building overpriced buildings. The trustees, dollar signs in their eyes, sign off on the plan without thinking things through. The Poo Bah arranges to buy real estate with the college money at a huge inflated price, in exchange for “considerations” to the Poo Bah. It’s great work if you can get it, though it does tend to lead to the destruction of the helpless school.

The Poo Bah then leaves, with a golden parachute, plus whatever “bonus” proceeds from the buying spree, plus more bonuses for “growing” the school. The school then goes bankrupt. Seriously, I’ve seen this before. Accreditation, being run by the same administrators who are looting the schools, is completely impotent to stop school after school being plundered this way.

Jane Sanders apparently overinflated the college’s donations in order to get a loan for that property. Isn’t that bank fraud?

–I’m not picking on Mrs. Sanders here, this is run-of-the-mill Poo Bah behavior. Director of Woodworking? Ok, usually the fiefdoms that bloat our campuses are Diversity-related, but it’s the same principle.

And again, we’re not talking Presidential-levels of money here. Mrs. Sanders was “only” given $200,000 to go away and never come back, and it’s hard to imagine she got more than a couple million bucks more than that for the real estate “deal.”

Time to move up to the big kahuna, for-profit education. Or was I talking about Clinton?

We all know the for-profits are the worst scammers, however, and, of course, the Clintons are associated with skeezy for-profit school, Laureate. Curiously, I couldn’t find a “mainstream news” article on their dealings, however. I’ve covered Laureate’s “slash and burn” method of getting past limp accreditation before.

Let’s talk about the kind of money involved once you hit the big leagues in student loan plunder.

…Bill Clinton $16.46 million over five years while Hillary Clinton’s State Dept. pumped at least $55 million to a group run by Laureate’s founder and chairman, Douglas Becker, a man with strong ties to the Clinton Global Initiative. Laureate has donated between $1 million and $5 million (donations are reported in ranges, not exact amounts) to the Clinton Foundation.

Wow, look at the money pouring in here. Bill was paid over $3,000,000 a year for his role as “Chancellor” at this school. Not to denigrate Bill, but I still think educators should have primary roles in education. Why aren’t more people asking questions about this level of tax dollar looting?

“During Bill Clinton’s tenure as Laureate’s chancellor, the school spent over $200 million a year on aggressive telemarketing, flashy Internet banner ads, and billboards designed to lure often unprepared students from impoverished countries to enroll in its for-profit classes. The goal: get as many students, regardless of skill level, signed up and paying tuition.

Wait. Trump gets grief for aggressive marketing by a few dozen salesmen at Trump U, which failed, while the Clintons get a pass for being associated with a school that needs to spend $200 million a year on marketing to get students? There really seems to be some hypocrisy here as the Laureate log is far larger than the Trump U splinter.

It’s not like the Clintons didn’t use themselves to market the school less than Trump did his school:

Still, for five years, Bill Clinton allowed his face and name to be plastered all over Laureate’s marketing materials. As Clinton Cash reported, pictures of Bill Clinton even lined the walkways at campuses…

I’m not trying to be pro-Trump here, but it’s clear when it comes to the hierarchy of education fraud, the Clintons are on top by a wide margin. It’s weird how the mainstream news doesn’t know any of this, however.