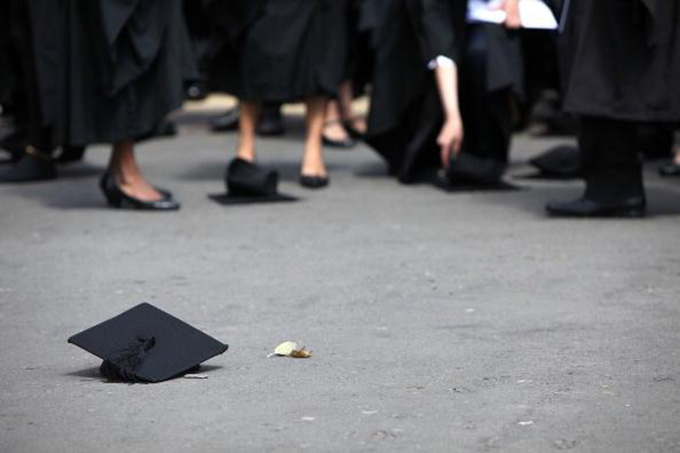 “We can’t tell you how our graduates are doing. We have no way of tracking that information…”

–when I began to suspect the true extent of the fraud at my community college, I began to ask questions, and got answers like this. Colleagues at other schools assured me they received similar answers.

“College graduates make a million dollars more over a lifetime…”

–despite admin’s evasive answers, they spew this drivel often enough. I couldn’t help but notice that when I asked an administrator if she’d send her children to the community college, a look of revulsion crossed her face. That’s when I determined that it wasn’t ignorance or incompetence: they knew the evil they were doing.

On the other hand, higher education doesn’t mean more money, as I’ve suspected for many years now, though I’ve seen many kids destroy themselves with student loans, believing that paying for college credits would pay off.

At long last, we have real research showing how impoverishing our “modern” higher education system is:

Graduates earning less than those who did not go to university, research reveals

I’ve shown before, with some basic calculations, that a janitor can expect to be better off, financially, than someone who goes to college at today’s prices, but that’s just my conjecture, along with the assumption that janitors really can make $25,000 a year. The linked article, however, shows my conjecture is now simple fact for most students: going to university actually decreases your income.

Now, the study was based on UK universities, and there are a few qualifiers and exceptions. The results, however, are things that any insider like myself (and, I assure you, every $100,000 a year deanling) has long known.

Let’s look at some key quotes:

Results showed there to be 23 universities where, on average, male graduates were earning less ten years after when compared with the average for non-graduates.

It’s a long term enough study that these results are relevant. The most important detail is that it’s the lower-tier schools that are hurting their students the most. Much like in the U.S., I suspect the lower tier schools in the UK shout the loudest about how earning any degree will lead to riches beyond imagination.

The study also highlighted big differences in earnings depending on degree subject; those studying the creative arts had the lowest earnings and, on average, earned no more than non-graduates

In no way am I criticizing the creative arts. Art is very relevant to the human condition. What I am criticizing is the idea that we need to slam someone into a lifetime of debt so that he might possibly be able to draw slightly better pictures of parrots or whatever.

All in higher education have known these things, but, I promise the gentle reader, there’s not a campus anywhere with a poster outside the Mass Communications department saying “Our graduates earn less than anyone else!”

I also promise the gentle reader that every accredited school promises to act with integrity…it’s a queer sort of integrity where the school is nevertheless allowed to hurt the innocent or ignorant as viciously as it can, however.

“…graduates from richer backgrounds earn significantly more after graduation than their poorer counterparts,”

Again, everyone in higher education knows the three secrets to success: go to a good school, major in something legitimate, and have rich parents. I know, those aren’t all viable options…but you won’t earn a million dollars more if you have a bogus degree from a bogus school unless you have rich parents, I nigh promise you. Administrators will tell you otherwise, even though they know better (they won’t send their kids to crappy schools, for example).

The final insult comes from a high Poo Bah’s comment in response to the established fact that going to university is financially a mistake for many kids:

Universities Minister, Jo Johnson, said the Government accepted there was still a long way to go to improve social mobility. He said: “We have seen record application rates among students from disadvantaged backgrounds, but this latest analysis reveals the worrying gaps that still exist in graduate outcomes.

“We want to see this information used to improve the experience students are getting across the higher education sector.”

The incompetence here is jaw-dropping. This goober has just been told “fake crappy schools and bogus degrees are hurting our kids.”

A decent human being, even a borderline competent government functionary, would respond in the obvious way: “We’re going to shut down crappy schools and stop offering bogus degrees.” It really is that simple.

But, no, the Universities Minister will have none of decency or common sense, instead he will “improve the experience students are getting.” I guess that means more climbing walls and lazy rivers, then, along with safe spaces.

Now, this study was based on university graduates in the UK, but the results they show in black and white are the same results we’d see if this study were performed in the United States.

If you go to a good school, or get a good degree, or have rich parents, university can absolutely pay off. If you cannot manage any of these and want to get a university education, please, gentle reader, pay as little as possible for tuition, and by no means should you go into debt for it.

And realize, based on the best information we have, that going to university actually hurts your economic prospects. Higher education does not have the student’s interests in mind.

Anyone want to make bets that posters of the results of this study will be on campus walls in short order?