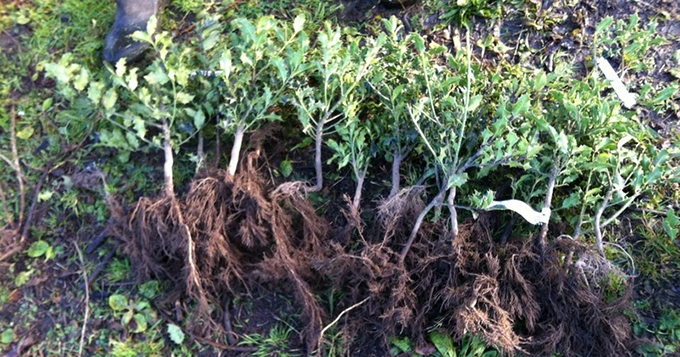 If you are shown a painting by Claude Monet (right), what do you see? Two children, walking on a snowy road …

And on the next photo? A rabbit on the lookout, ears pricked up… Few people will mention trees with bare branches, in the first case, or meadow daisies, in the second.

If you are in this situation, you are suffering from “plant blindness” . In many children, this results in a lack of interest in plants compared to animals: a child will always prefer to raise a rabbit rather than cultivate a planter of daisies ..

This concept was first demonstrated in 1998 by James Wandersee and Elizabeth Schussler and is now widely documented by scientists. It is the fact of not seeing the plants that surround us and of not being aware of their status as living beings.

However, the omnipresence of the plant world and its importance for life on Earth are well established. According to figures published in 2018 , all plants weigh 450 gigatons (Gt) of carbon out of the 550 Gt of total terrestrial biomass, or 82%! And, from a qualitative point of view, plants are essential to all life on the planet because, through their photosynthesis , they are a privileged entry point for carbon in the cycles of living things.

In addition, through their ability to store organic matter, plants are formidable carbon sinks, a powerful lever in the fight against global warming. From a nutritional point of view, they are sources of food for humanity and are, or have been, for a majority of human civilizations through the ages, the basis of our diet.

The origins of evil

Botanical blindness is often a corollary of the lack of nature syndrome ( “ nature deficit” ), a concept invented by the American journalist Richard Louv in 2004, and widely studied since by researchers in psychology and cognitive sciences.

In February 2020, a study published in Frontier Psychology shows that children connected to nature are happier than others, and more able to develop “sustainable” behaviors. We can therefore clearly see that botanical blindness and the lack of nature are a real problem for the future, the great challenges of our century being linked to plants (fight against global climate change, food security, the need for new drugs to treat diseases. diseases…). These problems could have disastrous consequences in the short term not only on the environment, but also on human health.

What are the roots of botanical blindness syndrome? This would first find its breeding ground in the very properties of plants: their lack of movement and their apparent insensitivity do not attract attention, especially as the lack of contrast in their colors causes them to blend in. the decor…

And our brains, bombarded with thousands of daily information, tend to filter signals and focus our attention on what is vital or deadly right now for us. By their intrinsic properties, plants are part of the signals that are systematically discarded, more than animals … We look at the plant world without seeing it!

The botanical blindness syndrome also takes root in the very education of children, in contact with the first educators who are their parents. Indeed, children’s (re) knowledge of plants is positively correlated with that of their parents , if the latter consider themselves essential to the transmission of this knowledge. Parental involvement could therefore be a determining factor in the fight against botanical blindness.

Then, at school, the teaching of plant sciences is insufficiently present in school curricula, even at the University in the fields of training for future teachers. And, when a botany education is given, it is often considered too theoretical by the students . However, here too, the trend would be easy to reverse with programs dedicated to the knowledge of biodiversity and the practice of science in the classroom .

In France, however, school programs have already offered effective leverage since 2007, in so-called “Education for” lessons , and among them, ESD, “Education for sustainable development” . However, the major problem surely still lies in the lack of time and space devoted to this teaching, in the annual progression of classes.

For the researcher Jean-Louis Martinand , “there is EDD if, and only if, it is issues of human development and environmental sustainability that constitute the“ contents ”of this“ education ”, in a“ pragmatic and democratic system ”. . And precisely, the “1 2 3 Plant’haie” device fits into these two dimensions.

The Maison pour la science en Auvergne (MPSA) is a department of Clermont Auvergne University , located in Clermont-Ferrand, on the scientific campus. Created in 2012 by the University of Clermont, under the impetus of the Fondation la Main à la Pâte itself under the aegis of the Academy of Sciences, it organizes and runs, in partnership with the rectorate of the Académie de Clermont , professional development actions in science intended for school teachers and college teachers in the academy. The trainers involved in these actions are teacher-researchers and researchers from the University, in tandem with field trainers, primary and secondary teachers.

In September 2018, the Maison pour la science en Auvergne created the “1 2 3 Plant’haie! » , In partnership with the rectorate and with the financial support of the Yves Rocher Foundation . Impacting the four departments of Auvergne, the system makes it possible to set up a rural hedge, chosen by the classes, in the 31 participating schools and colleges. It also offers teachers enrolled in the continuing science education system (18 to 24 hours face-to-face) support for their science projects in class, and the provision of educational material for their classes.

In 2018-2019, the constitution of each hedge was chosen by the several thousand students of the chosen schools, at the end of a long-term work on the knowledge of plant biodiversity around the school, the choice of species to be implanted and the reasons for these choices. More than 800 hazelnut, hawthorn, rosehip, maple, sloe and other medlar plants… joined schoolyards in spring 2020, planted by the students themselves.

All the hedges, from the smallest to the largest, constitute as many “witness” hedges of those that grow (or grew!) In the countryside of the municipalities concerned.

The school hedge, beyond being the concretization of this class work, will become over the years a real object of science available at the door of the classroom, close and familiar to the students. It is an evolving tool that will grow over the years, welcoming more and more biodiversity, a piece of nature reconstituted in the courtyard for a careful observation of the life of the hedge and its functions over the seasons.

It is also a tool making it possible to bring together all the disciplines of the school: sciences of course, with the biology of plants and animals, physics, technologies, but also maths, French through the production of writings and oral , without forgetting the well-being together and the well-being of the student who participates in the human development of ESD.

A project that integrates local partners

“1 2 3 Plant’haies” can only survive if it relies on a network of local partners, essential relays for it to take root in the field. It is first and foremost the educational community in the broad sense. Beyond the teacher, there are the school or college staff who also get their hands dirty with class projects (ATSEM in nursery classes, cooks in some schools, school management staff, etc.).

At the level of the districts and departments, it is the teaching teams of the academic inspectorates who ensure the logistics of the training courses delocalized in the departments, and who closely support the class projects.

With a view to co-education, the families of the students are also the natural partners of the project. Thus, the work of identifying species, the surveys carried out by the students with the village elders, the plantation itself in the spring of 2020, all these times have been the occasion to open here and there the door to the school for parents or grandparents, making the device an intergenerational project.

Finally, beyond the educational community, the actors of civil society were approached by the schools themselves: the town halls of the communes, elected officials and municipal employees, trainers of the Permanent Center of Initiatives for the Environment (CPIE ) or members of “nature” associations, specialized structures supporting employees or pupils with disabilities ( ESAT du Marand in Puy-de-Dôme, EREA d’Aurillac in Cantal), volunteer inhabitants and volunteers from the municipalities … Finally, the Mission Haie Auvergne advised, supervised the order and delivered the plants, produced locally by an Auvergne nursery, for the 36 hedges planted in spring 2020.