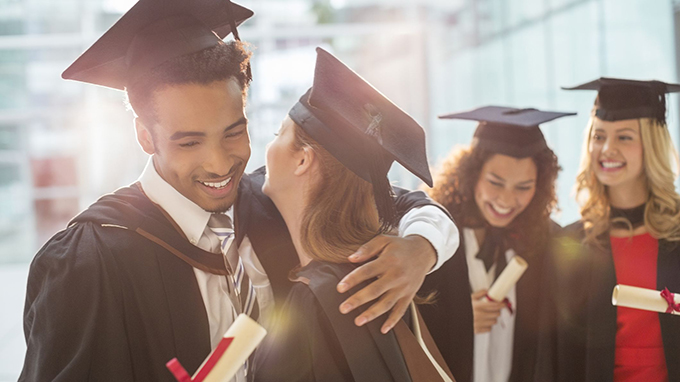 The author and philanthropist MacKenzie Scott announced on June 15, 2021, that she and her husband Dan Jewett had given US$2.7 billion to 286 organizations, including universities, arts organizations and other nonprofits. It was her third announcement of this kind since she first publicly discussed her giving intentions in May 2019.

Scott has donated about $8.5 billion to a constellation of nonprofits she calls “high-impact organizations in categories and communities that have been historically underfunded and overlooked.” She’s emphasizing racial justice, women’s rights and LGBTQ equality.

The $5.8 billion Scott gave to charity in 2020 amounted to nearly 2% of the $324 billion donated by individuals over the course of the year.

In early 2021, she emphasized arts organizations much more than in her prior funding rounds, noting that her goal was to lift up arts nonprofits that focus on diverse communities. She also supported a number of organizations like the Donors of Color Network and Native Americans in Philanthropy, which aim to grow civic engagement among communities of color, and charity-research leaders like the Urban Institute and the Bridgespan Group, which has been advising her.

As in the two previous blog posts she wrote to break news of the donations, Scott again encouraged donors of all means to join her, whether those gifts are money or time.

Scott, who was previously married to Amazon founder Jeff Bezos, has left it up to the causes she’s funding to reveal precise totals for each gift.

As a scholar of philanthropy, I believe that Scott is modeling five best practices for social change giving. 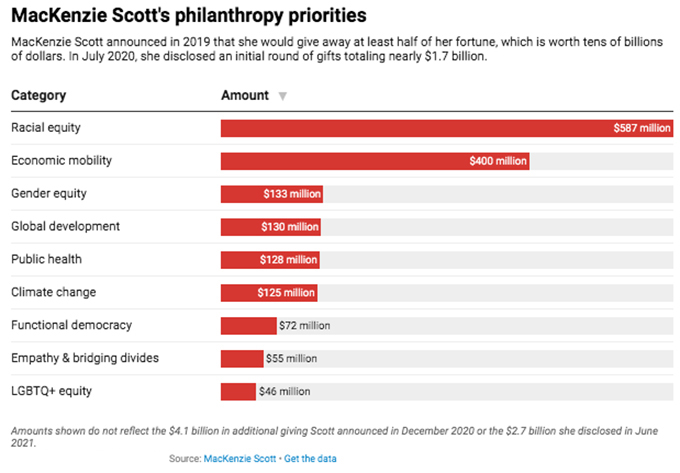 All of Scott’s gifts – many in the millions or tens of millions – were made without restrictions. That’s unusual, especially for her largest donations. For example, she gave $40 million to California State Fullerton, a public university, in 2021. In 2020, she gave $40 million to the Local Initiatives Support Corporation, which advocates for and builds affordable housing.

Rather than specify a purpose, as many large donors do, Scott made it clear that she trusts the organizations’ leaders by providing absolute flexibility in terms of how to use her money to pursue their missions. This hands-off approach gives nonprofits an unusual amount of freedom to innovate while equipping them to weather crises like the coronavirus pandemic without stringent restrictions imposed by donors.

In Scott’s initial round of giving, she highlighted organizations whose leaders represented the communities they served, such as the Movement for Black Lives and Latino Justice, which are run by leaders of color, and the National Center for Lesbian Rights and the Transgender Law Center.

She says this approach brings “lived experience to solutions for imbalanced social systems.” Backing groups led by people directly affected by an issue is a common tenet of social justice giving at a time when organizations led by people of color receive less funding than white-led groups.

Scott emphasized her philosophy in this latest round of funding, writing: “people working to build power from within communities are the agents of change.” Organizations like Esperanza Peace and Justice Center and Solidaire, which work at the intersections of multiple identity groups, embody this principle.

In addition, some of the grassroots organizations she’s funding, like Southerners on New Ground, an LGBTQ community-organizing nonprofit, and Southern Partners Fund, direct support to a region of the U.S. that is often overlooked by donors and foundations. 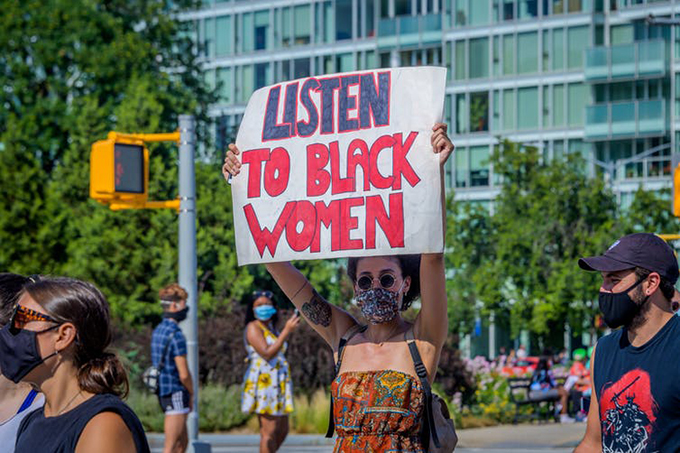 To support these causes, Scott sought out nonprofits led by people from the communities involved. Erik McGregor/LightRocket via Getty Images

Rather than making lengthy announcements about her plans and taking years to give away large sums of money, Scott chose to distribute this money rapidly and directly.

Unlike philanthropic peers like Priscilla Chan and Mark Zuckerberg, Scott’s initial three rounds of giving haven’t been channeled through a large-scale foundation or other entity, like the Chan Zuckerberg Initiative, bearing her own name or that of another billionaire.

And when she makes her public announcements, the gifts are already made.

Many of the organizations receiving these gifts are relatively small in scale and lack widespread name recognition. The multiracial justice group Forward Together and the Campaign for Female Education, a global aid group often called CAMFED, for example, until recently operated on annual budgets of $5.5 million or less, while the Millennial Action Project had an even smaller budget.

While she’s made some gifts that support relatively large public institutions of higher education, her focus has remained on schools that educate students from underserved communities. In addition to donations to Historically Black Colleges and Universities and tribal colleges, Scott has supported schools like the University of California, Merced, and the University of Texas Rio Grande Valley, both of which have Latino majorities.

Philanthropy that’s intended to bring about social change inherently expresses the donor’s values, Scott acknowledged in her announcement. She continues to highlight the inequitable social structures that have put her in a position to make such significant gifts, saying “it would be better if disproportionate wealth were not concentrated in a small number of hands.”

And like the many women donors I’ve interviewed and studied, she is using her position as one of the world’s wealthiest women to amplify the voices of the leaders and groups she supports. Her goal is to encourage others to give, join or volunteer to support those same causes.

As Scott keeps noting, her philanthropy addresses complex issues exacerbated by systemic inequality that will require sustained and broad-based efforts to solve.