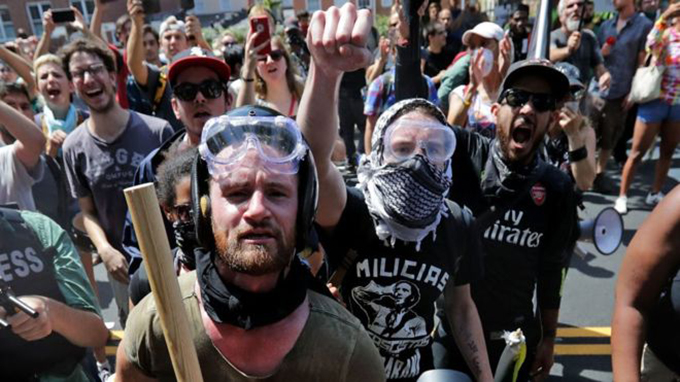 Antifa is a menace; the mere knowledge that these maniacs are near is more than enough to cause classes to be cancelled, as has happened numerous times on campuses throughout the country. Everywhere they show up, violence ensues…it’s so weird that it’s taken so long for Antifa to be considered as, possibly, a terrorist organization.

Part of the reason for the slow understanding of the terroristic nature of Antifa by our citizens is because the media just puts such a warm fuzzy spin on all things Antifa-related. If you don’t have friends who were exposed to the violence, or don’t carefully look around for live videos from YouTube, you have basically no way to actually know what a menace to your physical well-being Antifa is.

My blog post today has a nice title…but it’s not a title of an article you’d find in a typical mainstream media newspaper. The paper will tell you the reason no such title can be found there is because Antifa is harmless, nonviolent, peaceful even, and it’s only because of “Nazis” that Antifa seems to be connected to violence.

But is this true? Let’s consider the following video:

#UnderCoverAntifa: Louder with Crowder Exposes the Dangerous Truth of Antifa

A quick summary of the video: an independent journalist (i.e., someone who wants to show we’re not being told the truth by the mainstream media) spent weeks infiltrating an Antifa outfit. He has them on tape discussing plans for violence, discussing bringing weapons (including AKs) to their peaceful protest, in short, acting just like the violent organization they appear to be. He even has a woman with a taser (which she threatens to use), and she passes out knives to Antifa members (including the infiltrators).

The actual full video of the investigation is hard to find on YouTube. “For some reason” it keeps disappearing from YouTube, so you have to poke around to find snippets of it in other videos discussing the evidence.

The investigators tried to get various official media to cover the story, but none of them would touch it. However, the woman with the taser was eventually arrested for assault at an Antifa protest in Utah.

So, yes, Antifa was investigated, and one of the people identified in that investigation was arrested. How did the media cover this? Let’s take a look:

–I repeat: “no credible threat” for video showing Antifa planning to bring shotguns and knives to their protest.

The University of Utah is crediting a coordinated, multi-agency approach to security…

Now, a “coordinated, multi-agency approach” means they must have talked to the FBI, the local police, and possibly other organizations familiar with terrorist behavior, and determined that the video showing people planning to bring shotguns, tasers, AKs, and knives to the protest was not particularly threatening.

Does that ring true to the gentle reader? If so, I want you to reconsider that the next time you’re forced to throw away your water bottle and take off your shoes before passing through airport security. Yeah, a government terrified of people wearing shoes is probably going to have some concerns about people bringing that kind of weaponry to a protest.

“… two people were arrested when scuffles broke out between protesters and counter-demonstrators.”

That word, “scuffle,” sure is fascinating how it’s used. Has anyone noticed when a police officer is attacked, words like “attacked” and “assaulted” are used, but when police officers attack someone, it’s always a “scuffle”?

I really want to point out: an Antifa brought a taser with the express purpose of using it on someone, and used it one someone. In what universe is attacking someone with a taser fairly described as a “scuffle”? People die every year from taser scuffles…I reckon it’s too optimistic to think she’ll be charged with attempted murder, here.

The school doubles down on the taser attack as a scuffle:

According to court documents, a female protester featured in Crowder’s video was later arrested for aggravated assault during one of the scuffles.

Steven Crowder, who made the video and risked his life for the investigation, is surprised by the spin. He checks with the police and FBI, and they have no evidence of any contact by University of Utah asking about credible threats. Hmm, that’s rather different than what the news article implies, eh? He decides to take the university to task:

Investigative journalism is pretty dead nowadays, but I remember when journalists, real journalists, would do more than just read off statements from the government, or recite whatever the company line was. So, while I don’t completely approve of Steven Crowder’s methods, I concede what he does is necessary.

First, Crowder investigates the university admin responsible for this ridiculously spun piece of crap. He sees that this guy is heavily invested in Leftist ideology, was a big time Hillary supporter…he couldn’t be more of a Bolshevik if he spoke Russian. Crowder knows full well the guy won’t talk to him under any circumstances.

So, Crowder calls, and leaves a message, posing at a Left wing Hate media outlet. The admin calls back shortly. Crowder then toys with the guy, making him look well, like the buffoon and hack that he is. Eventually Crowder takes him to task for his fake news report: no police were actually spoken to regarding the investigative video, the admin made that up out of whole cloth.

Admin lies all the time but there’s a big problem with this particular lie: it was printed as truth. So, Fox News covers that police see no credible threat…and then every other organization repeats the lie ad infinitum. They do this because, as I said, investigative journalism is dead, and all our mainstream news organizations do nowadays is read off what other people have written.

So, how bad is Antifa? You certainly can’t tell from news reports, because, as we see here, we can have “taser scuffles” that are lightly addressed, if mentioned at all. Are Antifa members shooting off heads in “shotgun scuffles”? Are they taking baseball bats to cars in “baseball bat scuffles”? How much is being buried? I suspect quite a bit, since the general public considered Antifa a terrorist organization long before such a concept was even whispered by the mainstream media.

We really are at the point now where a reasonable and fair headline of “Antifa investigated, arrest made” is instead presented as “nothing to see here” by every news site. How useless are they now?

Incidentally, when I heard about the Las Vegas mass shooting, I didn’t go to CNN, MSNBC, AOLNews, or any other news organization. Instead, I went to message boards and contacted friends in the area who might actually know something, because our “news” services are so corrupted now that expecting them to give me any real information, much less the truth, would be idiocy on my part. Only after all other sources were exhausted did I even consider one mainstream site—there’s no reason to look at more than one, since they’re all on the same team.

The mainstream news didn’t fail to disappoint, as they breathlessly told me that, after a mere 12 hours, the FBI had ruled out any political connection between the shooter and his mass murder.

The dog not barking keeping me awake here?

The FBI has been investigating any political connection between Trump and Russia for 10 months now, and still can’t rule it out, for some reason.

Why can’t we get the guys who investigated the shooter to investigate Trump, and finally clear up that issue in half a day? Hmm…