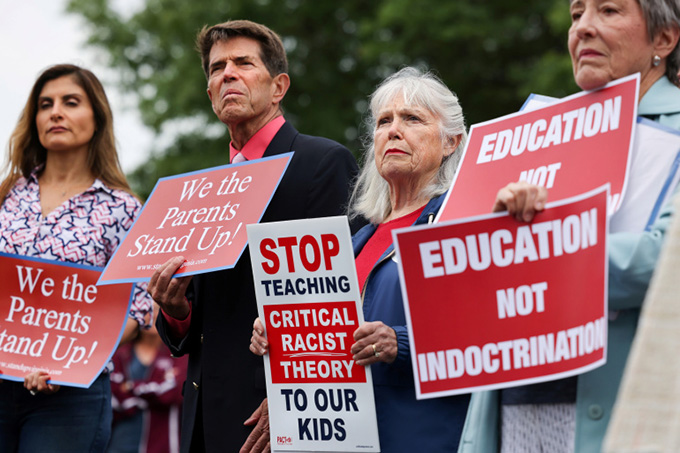 Perhaps no topic has dominated education news in 2021 like the debate over whether or not critical race theory should be taught – or whether it is even being taught – in America’s schools.

Critical race theory is an academic framework that holds that racism is embedded in American society and its institutions.

The debate about whether K-12 students should be exposed to this theory has prompted some Republican-controlled state legislatures to pass laws to make sure that never happens. As of early July 2021, six states have passed laws that seek to ban instruction on critical race theory in K-12 schools, although the laws rarely mention critical race theory by name.

But the problem emerges when the laws seek to control what teachers can say about whether a state or the nation itself was racist from inception, or whether the U.S. or any states sought to promote white supremacy through their laws.

Will these newly adopted laws require educators to paint a rosy picture of America’s past? Or do they still permit legitimate discussions about the role that racism played in legally sanctioned racist practices, such as slavery and racial segregation?

As a curriculum theorist who studies how school curricula portray different events in history, I am concerned that the laws will lead teachers to avoid topics that they worry could get them into trouble, even though it’s unclear what kind of trouble that could be.

But first, let’s take a look at what some of these laws actually say.

In Iowa and Tennessee, the laws say teachers cannot teach that the United States is “fundamentally racist.”

How can a teacher in Iowa or Tennessee explain that the United States was not “fundamentally racist,” yet at the time of its founding, race-based slavery was legal and stayed that way until after the Civil War?

The Texas law requires teaching that slavery and racism were strictly “deviations from, betrayals of, or failures to live up to, the authentic founding principles of the United States, which include liberty and equality.”

Does that mean a Texas teacher now has to say that Founding Fathers George Washington, Thomas Jefferson and James Madison betrayed the “authentic founding principles” of liberty and equality because they owned slaves?

These are not philosophical questions.

Not all of the measures against critical race theory come in the form of law.

In Florida, for instance, the Department of Education adopted a new policy that states teachers “must be factual and objective.” It also says they cannot “suppress or distort significant historical events, such as the Holocaust, slavery, the Civil War and Reconstruction.”

But the policy also states that distortion includes teaching critical race theory. The policy makes clear that it is referring to “the theory that racism is not merely the product of prejudice, but that racism is embedded in American society and its legal systems in order to uphold the supremacy of white persons.”

The policy further prohibits the use of material from the 1619 Project. That was a series of articles in The New York Times that connect the founding of America to a slave ship that arrived in Virginia in 1619.

The Florida policy also says teachers “may not define American history as something other than the creation of a new nation based largely on universal principles stated in the Declaration of Independence.” Instruction also must include the U.S. Constitution, the Bill of Rights and subsequent amendments, the policy states.

These restrictions create quite a few concerns for, say, a Florida social studies teacher. Now, such a teacher must figure out how to tell students what the Founding Fathers really meant when they wrote “We the people” in the U.S. Constitution, without saying the Founding Fathers were racist for excluding Black people from the meaning of that phrase.

Teachers may be torn between whether they should follow these new laws and policies or follow their professional code of ethics, which says teachers “shall not deliberately suppress or distort subject matter relevant to the student’s progress.”

These are questions that lawmakers have essentially forced teachers to confront before they set out to teach American history. But there are no satisfactory answers for teachers, who will be forced to “distort” history one way or another.

Either they will “distort” history in the eyes of lawmakers who say it’s wrong to teach that America was racist from the start. Or they will distort history by ignoring the fact that – as the U.S. Supreme Court once noted itself in 1857 – Black people were “not intended” to be regarded as “citizens” under the U.S. Constitution and therefore had no constitutional rights.

Author Bio: Nicholas Ensley Mitchell is Assistant Professor of Curriculum Studies at the University of Kansas