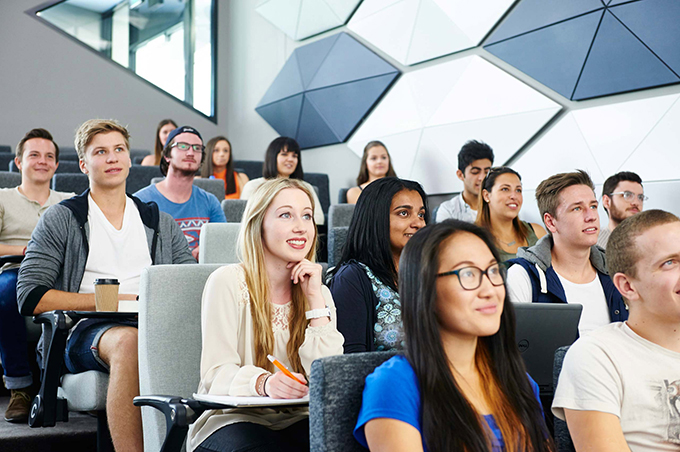 In October 2018, I had the opportunity to initiate in Paris-Dauphine a master course on the transformations of work in the digital age . It was about understanding the links between changes in work and new forms of organization and management. In the spirit, this teaching was also an opportunity to try to link often separate practices (pedagogy and research). The debates, the doing and the analysis intertwined with sessions outside the walls. Part of the hours had to take place on the ground, in these places where the very object of the course is built: coworking spaces, corporate labs, makerspaces, hackerspaces, militant associations, cooperatives …

Beyond this spatial decompartmentalization, the idea was also that the students see themselves as participants in the long course, all the old remaining associated with the modules. Through social media and a blog, the goal was also to allow all those who wished to participate in the sessions and to ask questions.

Today, most courses, even the most innovative, rarely value the work of students in and for society. Copies, reports, prototypes, often remain in the academic space. Here, the idea was to associate all learners with the co-production of a “common” knowledge through different types of articles published in media that respect the most generous creative commons.

In order to maximize the combination of points of view, three types of roles were assigned to students. Four of them (the “journalists”) were responsible for producing a report and an article summarizing the course (in French in The Conversation and in English in LSE Business Review ). Six groups of students played “analysts” by conducting class sessions with presentations, round tables, recorded interviews and micro-workshops.

The instruction was to articulate theoretical blocks (related to research in the social sciences and management) with interventions from two to five major witnesses that would allow to create even more interactions. Each group of analysts had to write an article summarizing their session (published in Medium). Both the course and the articles had to mobilize theories, concepts and data of a research nature. Finally, a third role of “historians” concerned all the student analysts who were all to feed a report in real time of the course (from a Framapad ).

The whole course was organized as follows: six hours of inaugural lesson I taught, followed by fifteen hours of thematic sessions led by the students. An hour of distance debriefing session of the last course marked the formal end of the teaching.

The six-hour seminar anchored this experimental course in a tradition: that of the inaugural lecture. This first part was an opportunity to problematize the transformations of work and management and to provide a framework for analysis. The intervention was divided into three parts: a first on new work practices, a second on the stakes and dimensions of new work practices, and finally, a third articulating work transformations and management changes.

I wrote a summary and in-depth text of the inaugural lesson – “Meaning, information and machines in the digital era: in the hands of Merleau-Ponty” . Anchored in my research, he positions the whole of the reflection on the work and the new forms of organization in a phenomenological logic, that of the philosopher Merleau-Ponty .

This founding article introduces a new personal concept: “reversible organizational narratives” (NOR). The idea is that new forms of work and management are increasingly taking the form of narrative devices and practices. These narrations make superimposable relations that seemed rather dialectical in the context of the “old world” (client-producer, private-professional, failure-success, home-office, employee-entrepreneur, single-set …).

The students then had the opportunity to analyze the six thematic blocks that were: “Telework and mobility in cities and countryside”, “Pluriactivity in a liquid world”, “Freelancing and new forms of work”, “Automata, platforms and new digital mediations “,” Makers and new forms of crafts “,” Third places and collaborative spaces “.

Each time, the presentations were critically documented and put into perspective. Round tables, recorded interviews, and animations made the whole thing very interactive without sacrificing content.

Four observations on the logic of a pedagogical “common”

First of all, students are very motivated when they really feel involved in producing a course. I was very impressed by the momentum and the content. I had the opportunity to learn new things about work transformations, much more than I had hoped. Of course, defining a framework and a requirement is likely important for the exercise to deliver.

We can also note the importance of the articulation course / experimentation. The only lecture (the inaugural lesson) or the only experiment would probably have given different results. The lesson has created an atmosphere, a requirement and an analytical framework. Conversely, the thematic sessions, more experimental, have freed the course and really be in a collective logic. No production of a common knowledge without opening all points of view.

The third observation concerns the space and time of pedagogy. Take for the teacher a position of withdrawal and erasure at the end of the lesson, take the course out of its usual context (whatever the type of classroom) and go to the city, in the heart of the neighborhoods where really spend the socio-economic activity, totally changes the atmosphere of teaching. Everyone feels that the page is white and that he has the right to take charge of the narration.

The fourth lesson focuses on the link between digital tools and the local course. The presence of the journalists’ camera (also used to film the interviews), smartphones powered to tweet, blog or manage the live Facebook and the presence of the big witnesses helped to “put” the exercise. This frame gave it an importance even a certain solemnity. In addition, these practices have created a real bridge with the outside world. Several questions, reactions from elders, consultants and researchers, came to me through these channels. On the next edition of the course, however, I think that we can greatly improve the number and quality of these interactions that could have a more important place in the course.

Merleau-Ponty has often insisted on the importance of chiasms , these reversible phenomena that seem to oppose and which are in fact the opposite of each other. An academic is a teacher-researcher. With this course, its combination of play and rigor, I have rarely felt that teaching and research were chiasms for each other. In these times of devaluation of pedagogy, it is for me the most essential lesson.

I warmly thank all the students of the Master 128 (promotion 2019) and the diploma and Dauphine alumni who participated in this experiment. Thanks to the places that hosted our out-of-town sessions, especially Startway and Le Square. A big thank you to our great entrepreneurial witnesses, digital nomads, researchers, consultants, slashers, makers and artisans who have embodied the discussion.